Disclaimer: This is from a purely aesthetics perspective. I know these are not important/do not affect gameplay/would not be noticed in a match, but I sincerely hope it would be considered for future updates if many feel the same.

The only game with a similar design approach afaik is AOM (maybe AOEO as well?), but AOM is half-fictional and already has a very distorted timeline (hellenistic greeks vs bronze age egyptians vs early medieval vikings), so each civ is kind of “trapped” in their iconic looks. AOE3 native americans used a similar approach, because their scope is also very limited. But AOE4 is more historical, and all the civs had long and continuous history, so I believe it would be a better idea to add a few more distinctive designs that reflect the progression of ages.

However, I would also like to point out that (1) such “progressions” are more of stereotypes rather than actual history (2) the actual scope of the unit and weaponry design in every AOE is much narrower than the timeframe it proclaims (for example, AOE1 chariots and cavalry appear at the same stage, AOE3 musketeers start with bayonets despite having the most iconic pike-and-shot look). So every AOE feels more like “building up a backward base in classical antiquity/high medieval/18th century then upgrade it” than “really progressing through early-middle-high ancient/medieval/modern eras”. But more flavor would be welcomed.

This is just an impractical proposal. I don’t know what people think about it.

Just to mention: the AOE3 fortress age musketeer did not really have a typical tricorne, but a deformed one, more like a half-folded wide-brim cavalier hat (which is how first tricornes are made though). In DE with higher quality model that is more obvious:

In a recent patch they finally updated it to a “true” tricorne which looks great, and really meets the 18th century hype:

It seems with the new patch, they fixed the hat of veteran musketeers to the historial correct tricorn which was common in the 18th century, the timeframe of Fortress age. 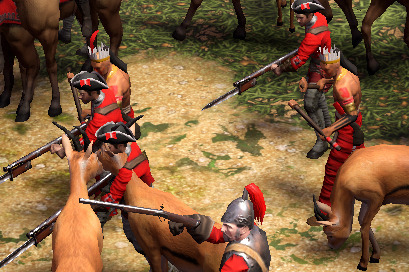 I hope similar changes could be done for AOE4 in later updates as well.