I have also seen this happening in team games. It is not always the blue color that is duplicated. I recently played 4v4 game with two green players.

I have tried to play 2 players vs 2 AI unranked private game - one AI from other team was still getting color of one of the players, we finally managed to have different colours in fourth try, when our players had no color chosen, and AI had 5 and 6. In all other configurations (everyone chooses color, only first team, whatever) there was still this bug occuring.
Game then is really hard to play, no idea if some units are friends or allies, same on minimap. Bug was on both computers.

For me it was happening on Windows Store version.

I just played a game with two blue and two green players. Two blues were in the same team and the greens were in opposing teams. Clearly a bug. 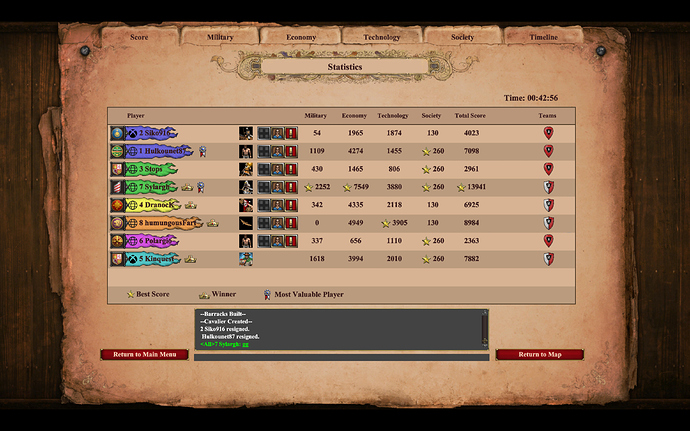 Very fascinating. Thank you @WiwiClementine for the very clear reproduction steps. If anyone else is able to determine a potential cause of the problem, please discuss it here. I’ve already escalated this issue to the team and will continue to pass along information that might be helpful in their investigation.

In the case of team games, I have seen this happening if some players pick a color and others go random, especially if someone picks blue (other than player 1). I think player 2 picked blue in this case, same as in the example of @WiwiClementine. I was player 8 in the lobby and picked cyan, some others went random.

Until now, I have only seen the duplication happening with blue or green (or both, as in the example above). Sometimes only green gets duplicated.

@GMEvangelos it looks like there passed few more months, and this issue is still not fixed. It is super easy to make in in unranked game, and it’s really really hard to play like this - you never know which unit is yours.

I have really not sophisticated repro for this:

Result:
Good colors on loading screen, wrong colors everywhere else (in game and so on). I’m playing vs AI with my son and it’s happening all the time. So players should be RED, BLUE, GREEN, YELLOW, and instead are GREEN, RED, BLUE, GREEN

Another thing - saving and reloading game doesn’t help, however while restoring the game in the lobby second player (human) has wrong civilization and team (colors are theoretically good). Not sure if this is connected.

Please, could you fix it? It seems like something easy, but it really prevents playing. 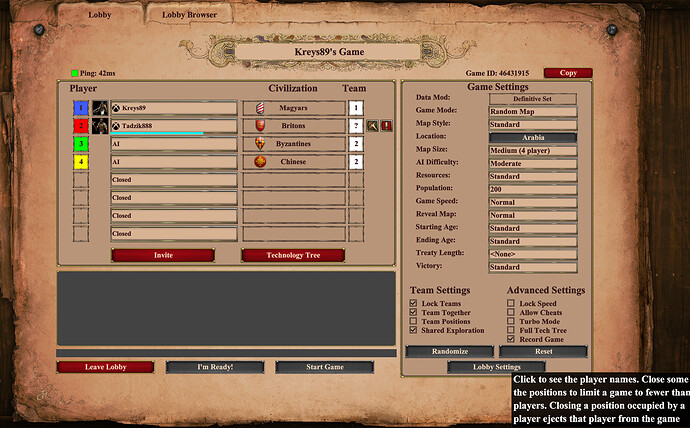 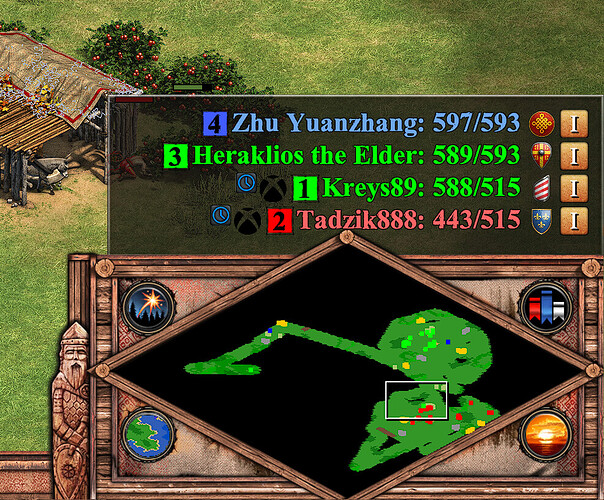 I too would like to report this bug occurring. For myself it has been occurring for months, perhaps as long as 6 months. The situation is described perfectly by Kreys89. For me the frequency of this issue is 100% of the time. It’s annoying because I’m currently teaching a friend in 2v2 matches against 2 ai players. Without fail, every single time we play I end up green and so does one of my opponents. Here is an example. Below is a screenshot of a match I created in the lobby, none of my friends were online so for example I just have an ai for my teammate. 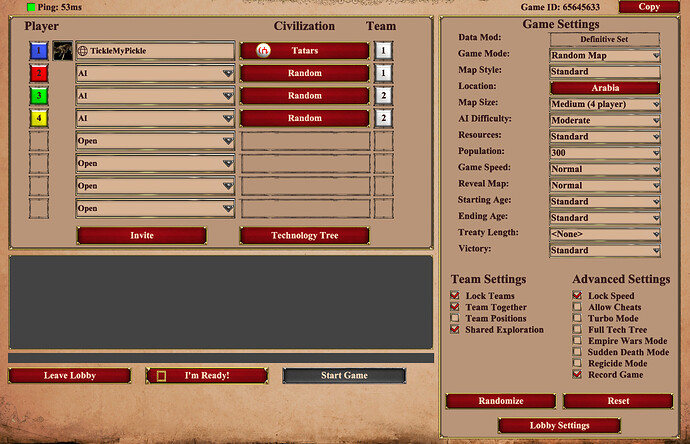 I have done another test where I changed the third players color to something not green. As I always seem to end up green. Here’s what the lobby looked like: 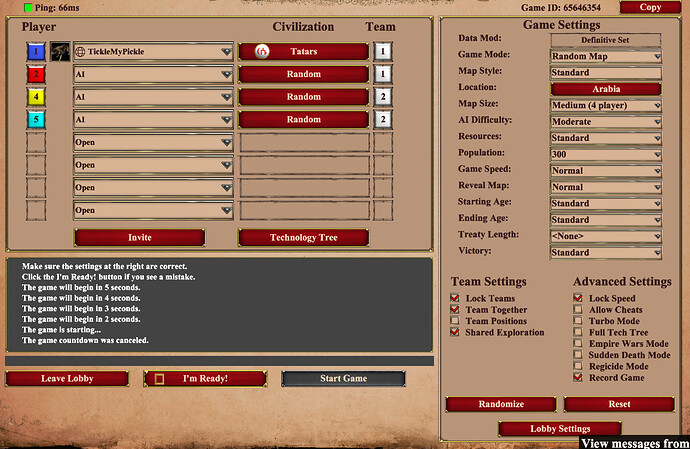 As you can see the issue seems to be that the 1st player ends up colored green no matter what, it seems to be independent of the other players colors.
1 Like
Kreys89 January 26, 2021, 8:19pm #12

What a pity that no one from devs team is fixing that super annoying issue. Especially, that probably it’s something easy to fix, and it’s fully reproducable.

Any chance of having this fixed?

I have the same problem when I create a game with my friends. It’s really annoying.

Same bug. It happens every time I host on Steam an online game both with or without AI bots. Two players are always blue.
Any fix yet?

I, too, bumped this ticket internally to make sure it’s still getting some visibility. Unfortunately it is NOT as reproducible as noted here, which means any additional details that could help explain why it is happening to all of you will help the team figure out how to fix it. This could include:

5 months later they try to reproduce it 11

My friend and I have been experiencing this issue for quite awhile now. We try playing against AI, often 4 vs. 4 and find the AI have two magenta players and two orange players. We have tried choosing colors for every player (human and AI), keeping it random, picking certain colors…nothing seems to fix it. Very frustrating to play. Would love to hear some update on how this is being addressed/fixed. 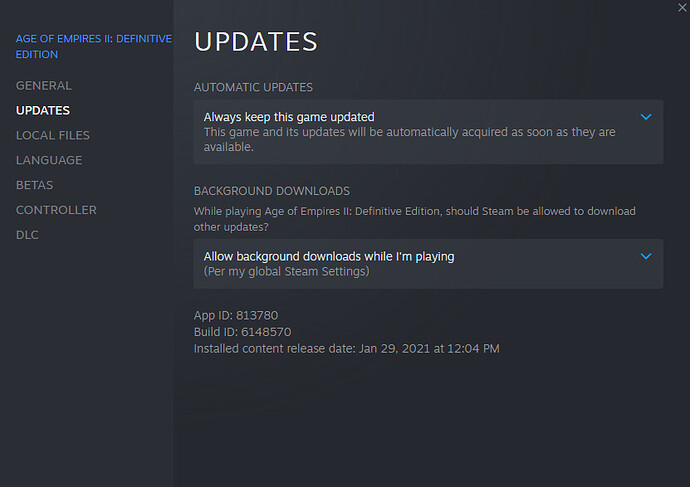 Fantastic information! Thank you; I’ve passed it along to the team.

This I don’t believe is related to dx or build number or going to be viewable in the recordings unless it contains metadata from the lobbies.

On my steam account VacuousWaffle I can reproduce the bug by hosting an unranked game, and it appears before the game launches or other players join - merely chatting w/o choosing color shows that account to purple, despite the chat being prefixed as “0 VacuousWaffle”. This color is seen by other players and persists throughout rest of game. Attempts to change color in lobby update the chat prefix (1 VacuousWaffle and so forth), but my chat messages remain purple.

Note: Custom Scenario maps still override this color. Other steam accounts on exact same computer using family shares are not affected. Logging in/out between them does not fix my main steam account. So I suppose seems I’ll have to switch to an alternate account if I want to host unranked lobbies that aren’t scenarios. Others with the bug may be able to workaround for now by creating steam family share accounts, not exactly ideal though.

Anyways though, maybe the fact that the color error is visible in the unranked lobby before launch might hint the devs where the color is being incorrectly loaded or cached. Most odd to me, but I don’t know the lobby and game launch codebase. If a dev is willing to add me on steam (VacuousWaffle) I’d be willing to launch a few tests if I’m not too busy that day.