What is your opinion on these ideas?:

I hope that this gets the developers attention, since it is a buff to the game itself, not a particular civilization. We all win from this, but mostly Age of Empires.

Thread format: I think it’s better to have 1 idea per thread. Otherwise things get side-tracked.

Could be a nice option. I think it’s quite a constant multiplier of the vils on that resource though so personally I wouldn’t turn that option on.

Seems awfully specific of a suggestion. What should be are quick buttons for your civ, ally’s civs and opponents’ civs. The Drop down menu is cancer.

Seems cool indeed. But could be messy in the details, what if you build a building with 2 vils? Does the time remaining adjust or not?

@Paulnternet, firstly, thanks for the advice to spread the ideas into different threads. This is my very first entry into the forum, so it is highly appreciated.

n fact, this percentage is most probably calculated based on the seconds needed to create it and the number of villagers,

I’m pretty sure not. Base is game ticks, like the discrete time the game operates in. Each tick it counts the builders, multiply that by buildspeed, deduct the necessary resources, add the correct amount of HP, and so on. Then it’s updating the % as build progress of some hidden values. But it’s not counting seconds at all; seconds are implicit.

Anyway that’s derailing it. Seconds left would be good to know so sure, why not add it.

Offtopic, but why don’t Khmer have the new farm bonus written in your screenshot 11?

Are you playing on older version?

Thread format: I think it’s better to have 1 idea per thread. Otherwise things get side-tracked.

Add the exact time next to the completion percentage, during the creation of a unit, building and upgrade.

Really nice idea. I’ve always wondered why they never did it. Same for the res per minute or at least number of workers on a res.

Both of these are very easy to do. But might still be too much for something not many people are asking for…

The remaining building time could instantly change the moment vils are added or removed. Really not that many calculations involved…

Hi @Harooooo1. I just downloaded a picture from google, not my game.

How would you calculate it? For example the walking time of villagers always depends on other villagers and other stuff for example woodlines getting further away from the lumber camp.

I will repeat myself from the initial post - the compromise is to take an average value from the previous 30 or 60 seconds. The average takes into account all factors simultaneously. Of course, this hides a lot of risks - losing a villager, to a boar, having an upgrade, etc. I don’t think that there will ever be a perfect solution satisfying every criteria, but something basic could be of help. If we don’t try we will never know, I think.

What about teamgames? I think it is easier just to switch to your opponet cicilization in 1v1.

True. I should have explained it that it would be of help for 1v1 one games. For team games maybe it would be better if you can have the option to quickly compare every team bonus at play.
Thanks for your opinion.

would be nice to detect when my vills are being inefficient - eg when I have ‘30’ on food but almost no food income because it’s all long-distance fishing, or ‘30’ on wood but the lumber camp needs to be refreshed ASAP

The whole reason why I started this post was the latest case of 30 gold miners staying stuck on top of each other, not able to drop a single deposit of gold, while I in a dire need of gold. On paper everything is ok - 30 miners. In reality, 30 dumb blocks who can’t make way for each other to the mining camp

Also, understanding that having a constant stream of eagles is done with less gold miners compared to archers - an eagle is more gold intensive, BUT it has a slower creation time, thus lower gold/sec requirement! You can do the math and see that this is the actual case. This reminds me, that maybe we can have a hint for each unit, what is the res/sec, which will keep it being produced constantly, although this is a really far-fetched idea.

YES to this ! We need CREATION time for Units, Buildings and Advaning Ages.

We also need specific bonuses to be displayed (such as exactly how much damage does a spearman do vs cavalry or how much does a knight take from the spearman, etc).

Hope this gets included in the game at some point !!!

We also need specific bonuses to be displayed (such as exactly how much damage does a spearman do vs cavalry or how much does a knight take from the spearman, etc).

I agree on that! I’ve been a total noob for quite a while, until I started watching youtube videos are realized that there are hidden attack bonuses in this game. It all started making sense! It is a big confusion for new player why you have to make such fragile units as the spearmen against the flamboyant, glorious knights. Even if you lose 30 knights to a bunch of pointy boys you won’t pay too much attention, but rather start raging.

Yeah, it’s so puzzling to me that they hide such bonuses. It’s beyond ridiculous that players have to go to an external information source such as the fandom aoe wiki to look the bonuses up. 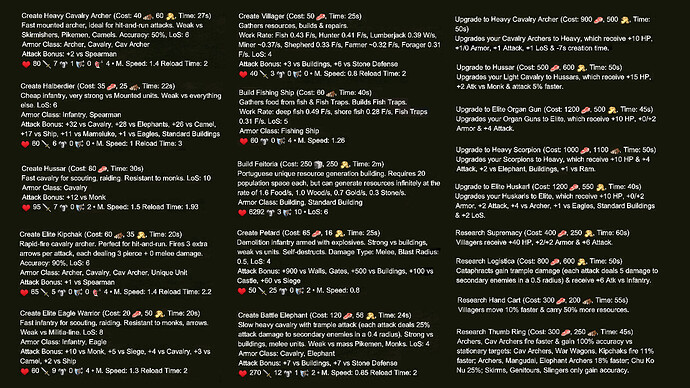