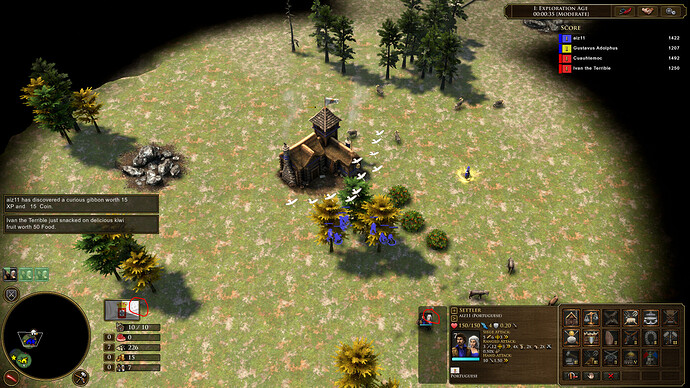 The only reason why there hasn’t been so much noise about this much post-launch is because there were alternatives available (i.e. user-made mods). However, with the recent update/hotfix, mods can no longer be used for ranked games. I have no idea if this is a temporary measure or permanent, but couldn’t the developers at least properly fix the “Classic”/“Legacy” UI’s readability for shipment numbers and unit selected numbers once and for all? This is something which has been complained about over and over again.

Now, I can see that there has been an effort by the UI designer, as evidenced by stuff like this

But evidently they’ve designed this using some external wpfg design program and this dropshadow effect isn’t being rendered properly by the aoe3 DE exe itself. Please fix this, it’s been an issue for far too long.

Not being able to see resources while opening the age-up dialog (with classic UI) is another issue… if the devs aren’t willing to redesign the politician UI because the descriptions would not fit, I would suggest adding an option to set background opacity for “pop-up dialog”-type UIs, say from 50% to 100%.

PS: While I’m at it, please add player colours to the player summary/tribute dialog. I appreciate that colours and flags have been added elsewhere, but the player summary UI is still lacking that, and this at least should be a simple fix.

I also valued the RED idle villager banner in Aiz’s Legacy UI Tweaks mod. This helps it really stick out in a player’s peripheral vision.

This definitely needs a bit more attention. These things are super important to us as a community, given that these things add a ton of value to what we want/do. Aiz’s work in legacy was nothing short of amazing and important. so for him to be voicing concerns here is quite important. I would urge devs to take what’s being said here seriously