Hello everyone! I’m sad I have to do this because it seems obvious to me… anyway, one image worth thousands words :

Despite me being dumb enough to pick russia in treaty, what are your thoughts on this? I feel like I want to play different civ depending on the type of game I’ll play (and my mood, teammates combinations, weather … lol).

And it might be too much to ask but even this change would be… HUGE. Just having the menu on a side with another panel on the right (being able to chat, find people, invite recent players…) 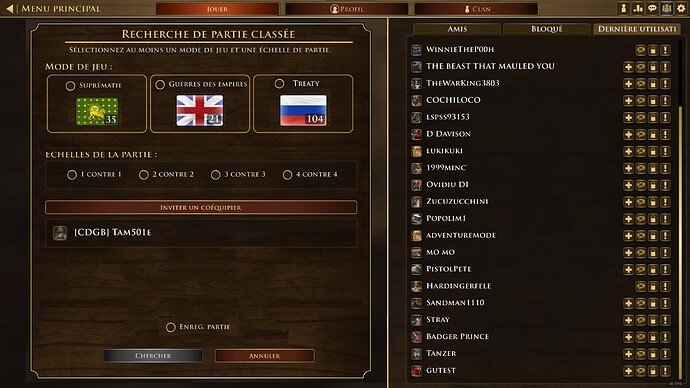 I would like that when you play a ranked game the level that your opponent has is detailed, in the past game you could see several ranks and thus they were distinguished when the game began, here you could do the same but instead of putting the rank put the ELO since you do not know what type of rival you face.

@Tam501e the interface you added is quite nice support the idea to know which civilization your rivals are going.

Yeah I also had the idea of picking your civ depending on your opponents pick, but it’s hard to find the correct way to do that with equity and balance… So I’d stick to the blind pick matchmaker.

I totally agree with this.

And indeed, if you are willing to play more game mods, not always the same civ suits the best.

Also, you should also be able to do other things while waiting for a game. Now you’re just stuck to a useless screen with timer.