Hi, does anyone know if each vanilla civ will have their own unique settler style, rather than the same generic style? I remember playing a scenario with the Ottomans, and the settlers had their own unique clothing, which was true to their nation, and I thought that was so wonderful.

Not sure yet. I’m hoping they will and also have unique models for european units. They all seem to look the same like musketeers etc.

In the vanilla game, settler models were based on a civs architecture. Example Portuguese, Spanish, and Ottomans get one settler model(Meditteranean) and Germans+Russians had a different settler model(eastern Europe).

Wars of Liberty does this (and renames them) and it is really cool.

The Ottoman settlers with Portuguese and Spanish appearance are quite ridiculous. Unfortunately, from what I saw of a German youtuber (I don’t know if he was allowed to show images of the DE, but he did), Ottoman peasants, like Ottoman architecture, are still the same employees for Portuguese and Spanish. Mod Ottoman Empires made new peasants, adapted new units for the Ottomans and gave new architecture, but the definitive edition does not seem to change that, unless they do it as a surprise for us. The problem is that any modification, however small in form, makes fans stiff and aged heads very upset and sad, so they start complaining that they want a definitive edition exactly the same as the original game they had before, only with graphics better defined … They cry if the Indians are not jumping around campfires … They would certainly cry if the Ottoman villagers looked like Ottomans, if the Ottoman grenaders and horsemen were really Ottoman, and if the Great Bombarda cannoneers had Ottoman costumes. They want the game to be identical to everything they saw 15 years ago, because they want to sit with their bottles and feel what it was like when Mom brought chocolate milk to them in their chairs. So, any change that could make the game more visually interesting is largely rejected, as it does not remind you of the big daddy’s chocolate drink. As far as I could see on youtube, the Ottomans are exactly the same, they have not changed the peasants, they have not removed the hussar and put an Ottoman knight, nor have they changed the grenadier with an Ottoman grenadian uniform. They are the good old civilization that must not have been changed to look like itself because of funds, and that the most childish fans of the series are keen to maintain anyway
because of their affective memories that make the world a worse place and spoil it… : (

I think that they could just use a reskined version of German-Russian settlers (figured bellow) for the Ottomans. 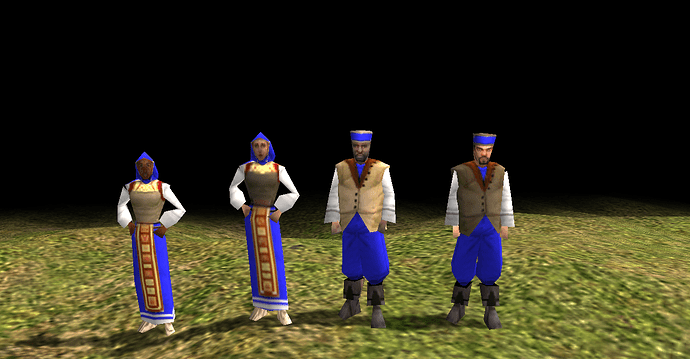 But I also don’t think that they’re really too keen to reassign and reskin assets in the game, even if this would cost no more than 3 labor hours for a designer and some meddling on the code. AoE3 don’t receive the same love from the devs as AoE2. Post-release, I expect that they will just try to fix the historically messed up attack-move.