Units passing through 100% built houses on a hill

Group of units have been able to walk through an obstruction of buildings that were built on a hill (Socotra map). In the game I made attempts of walling this area twice to prevent opponent getting through with no luck. Lost the game because of this.

You will notice from the replay that the corners of the houses are touching, but the units pass right through them.

First encounter of this issue 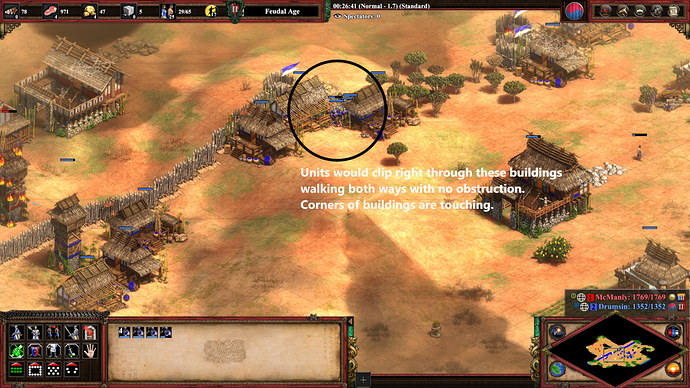 You have been fooled by building graphics not truly indicating where the buildings are when built on a hill. If you select the two houses in the replay, you can see the white boxes which indicate the tiles that are occupied by houses. These bounding boxes don’t touch, and hence there is a path between them.
Here is a top-down view of the area at 25 min mark. 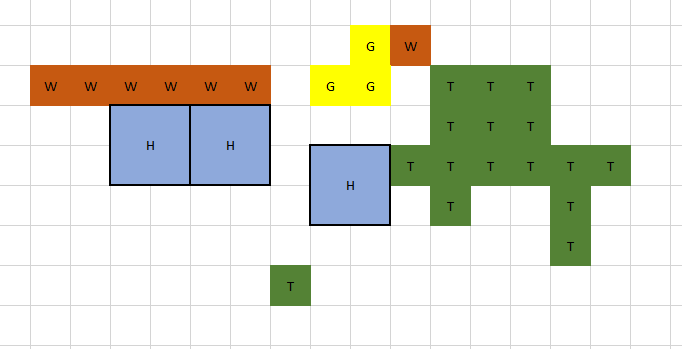 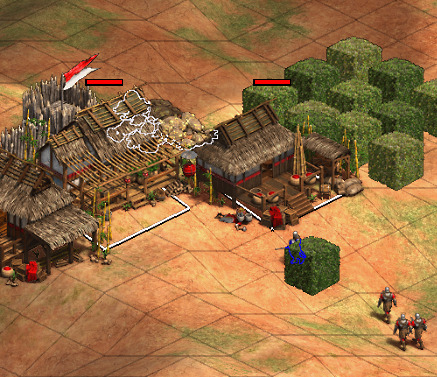 The original palisade wall also didn’t touch the gold mine. This can be avoided by making the walls by dragging them from obstruction to obstruction. In this case from inside the gold mine to inside the forest. The initial and final few pieces will glow in red but rest of the wall will be placed without any problems.

I find it helpful to wall in hills if I can imagine the top-down view of the area.

@Haladon Gah! I was fooled as it clearly looks like they are next to one another. I hate it when this happens. Looks like it has to do with the floor angles causing this.

Thanks for second set of eyes as I honestly thought I had this right.

I also used to have this problem. But in some DE patch, they made it so that the selection box represents the correct tile. That has help in detecting holes in walls a bit more easily. Just double click a house to select them all and see the boundaries.

Currently, the farm is the only building that adjusts correctly with elevation. (That is because it changes the terrain itself.) I have seen some games skew the building graphics when built on slanted terrain. This would improve the legibility of where the buildings are but skewed buildings look a bit odd. Another method could be to create different building graphics for each different tile elevation configuration (with for example stilts, foundation fillings, dugouts etc.). But I guess this would massively increase the number of sprites needed for each building graphic.