I always did like seeing simply “+1” type stats, though, I haven’t paid attention to unit stats since launch, so it doesn’t matter much to me, but I’d love to see any improvements for those who like to check that sort of thing.

You can never make something simple enough without trying.

Knowing at a glance is probably nice for younger players.

haha true, and I’m happy to inform you I too passed kinder garden : )

When in the heat of the battle, I really dislike the fact I need to calculate to compare it to my units.
For example: archers base damage + archers extra damage <> my unit ranged armor + extra ranged armor

Seems to me a simple fix to have it all in line with how the health works? Don’t know why they make 2 seperate kind of approach.

Archers have the same dmg (except Longbow +1) So you just count the yellow numbers for addition.

It comes with the number of games you play. And you will mostly care about the yellow numbers.

For experts I agree, but I’m just a casual player who just want to know if it’s wisely to attack or not. I did not studied the base damage & armor output of units and I’m not planning to do so.
Maybe that’s the issue, it’s more made for experts while it makes it more difficult for other players. It makes it way to complex while it shouldn’t have to. What is mean is this:

Best of both worlds, everybody wins in my opinion 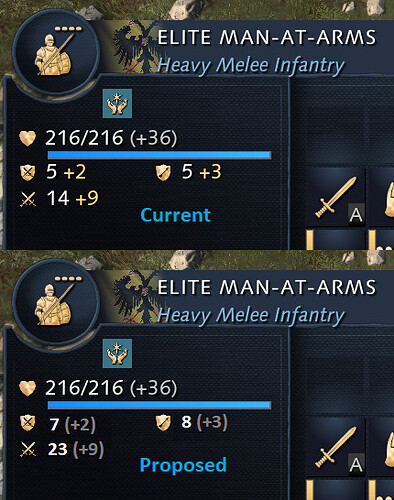 Agree with this, even if it’s just a small change, it would be great if the developers could let players individually choose how they want their unit data to be presented.