A potential idea for a fix. Are the devs able to re-instate each of the campaign achievements to be timestamped to when the player first has medals for all missions in each of the new campaigns?

DESCRIBE THE ISSUE IN DETAIL (below). LIMIT TO ONE BUG PER THREAD.
I unlocked the 3 Xbox achievments for completing all 3 new campaigns for the DLC.

*How often does the issue occur? *
Since the achievements can only be unlocked once it is a one-time occurrence for me

I’m not sure it can be reproduced unless it occurs with unlocking other achievements.

I was playing a single-player skirmish game as the Turks (to complete the challenge for the New Years Celebration of creating 21 hand cannoneers) and when I won the match I unlocked the achievement for winning a game as the Turks (since that’s the first time I’ve played as the Turks). After that achievement popped the 3 achievements popped for the 3 new DLC campaigns being complete, followed by another for collecting 100 relics.

What was SUPPOSED to happen if the bug you encountered were not present?
It should have just unlocked the achievement related to winning as the Turks and the collecting 100 relics, but not the 3 for the DLC 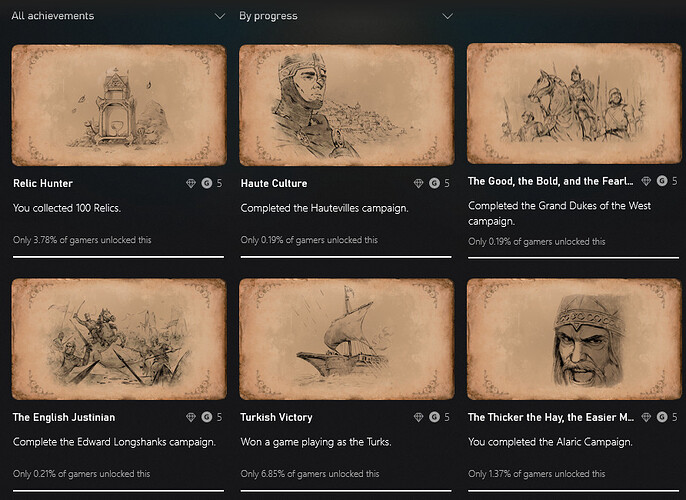 Does this bug still exit after the hotfix?

I’ve got these achievments after winning a ranked 1v1 game with the mayans on Arabia map. I do not own the new DLC so it was a bit suprising

So while you"re at it, can you finally do something about achievement synchronization from steam.
Or atleast make it so that you can still earn them on xbox, even though you already got then on steam.

It works fine in AoE III.

Custom mode does not apply to the game

Issue experienced:
Played ranked 2v2 with a friend, I was sicilians and we won a game on bf. and I got the achievements for “winning with sicilians”, “build a donjon” but also “homeless - win after deleting starting tc”, and I didn’t do that. I did do that in the game prior to that, also playing as sicilians, but that game we lost, so I don’t think it would hang over like that, but maybe. I was player 4 (yellow). The game I lost prior to the bf one was the first game I played on the new DLC. It was also ranked 2v2.

Was this fixed? didn’t see it mention in changelog

Welcome to another monumental week for Age of Empires II: Definitive Edition!