One of the most distinct charms of AOE2 was its vibrant team game (TG) scene. Unfortunately after the Age of Empires II: Definitive Edition’s release, the team game community has been left in tatters. Many players in our once active team game community in Voobly and HD have stopped playing. What used to be a place for a group of friends to gather nightly for in-house balanced 4v4s now vanishes. The reason for this is many-fold, and I am not blaming AOE2DE for this to be happening, I acknowledge that is what happens when the player base splits to a better version of the game. However, the void left by the dissolved TG community has failed to be filled by AOE2DE.

The TG experience in AOE2DE has left much to be desired: The unranked lobby has no player rating, so you cannot tell which player is at what level, making balanced-team TG impossible. Unlike Voobly, players cannot join a lobby as observers, which means observers cannot “hop up” to join the game immediately when a lobby slot becomes available. The ranked TG’s matchmaking is so poor due to the small number of players in the queue at any given time, that players queue for 8 minutes to find out they’re teamed with players who don’t know how to lure boars, and up against top 50 players in the opposite team. Because of unbalanced games, players stopped queueing for 2v2/3v3/4v4 games, making the player pool in the TG queue even smaller, leads to even worse matchmaking, it is a downward spiral.

I accept the fact that community organised team games is now dead given the current lobby system, and may take a long time to recover even if unranked lobby system improves (unlikely), but I do have a suggestion in an attempt to break the descending cycle for ranked team games.

Currently, AOE2DE team game queue players are being split between 2v2, 3v3, and 4v4. This is a good setup if there are hundres or thousands of players queueing at any given time, but with dwindling player base like the current AOE2DE TG queue, it is much more sensible to merge the TG queues by only having one option, so players can tick “1v1” or “team games”. This way we get more players in the matchmaking pool to draw from, this in turn means better matchmaking balance, and hopefully this will attract more players.

How the detailed mechanics that decide whether to put TG queue player into 2v2, 3v3, or 4v4 will be worked out by the development team, but I am thinking a preference list might do the trick. So a player can choose between 1v1 and TG, and they can choose which arrangement they prefer, then that player/party can queue longer for their preferred choice of TG types, but is still available for matchmaking for other TG types. An example is shown below: 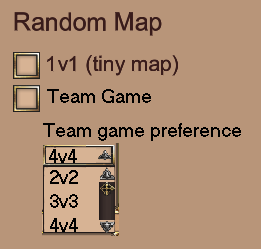 I also want to point out that in my experience, most TG players are more keen to play 4v4 (unless they’re teaming with friends, only then, they are interested to play 2v2 or 3v3 games depending on if the player’s team has 2 or 3 players). However 4v4s are harder to do matchmaking comparing to 2v2s, so if this suggested system is to be adapted, the delicate balance between getting a “more balanced 2v2 game” or “less balanced but much-preferred 4v4” must be carefully preserved.

With the current system, AOE2DE team game matchmaking has no chance of recovery, as the player base will only get smaller and smaller. I urge the development team to do something now while we still have some TG players left, and make AOE2 TG great again.

I agree with you, TG is going to die real quick in this game because of all the things you’ve listed, also some people like me do not like the map pool idea, actually i’ve been playing WAAAAY more HD than DE. I have 3k5 hours on HD and the numbers keep going up because TGs are waaay better than on DE.