*Disclaimer: more of a “vibe” then a build, side effects include having no real late game eco, you die when map resources runs out and needing actually have map control to play. The rest of this will be written in an infomercial style cause I thought it was funny

Do you hate it when your hunts and natural resources runs out?

Do you hate having to transition to mills/estates and agriculture in general?

Do you wish for your resources to last longer and return to a more natural and simple life of just gathering from mother nature?

Well introducing the US Au Naturale "build"™ which will increase the yield of your natural resources by 50%, allowing you to not have not have to resort to mills/esates and can enjoy those higher resource rates for much longer, bringing vigour to your economy.

Our patented™ secret ingredient is Overmountain settlers, available through the Tennessee age up. 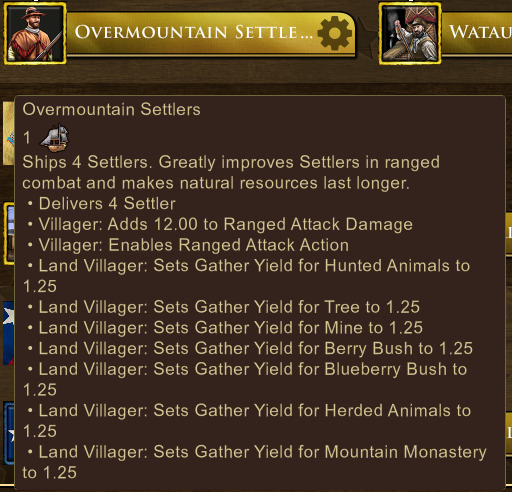 So by sending all of the yield increasing cards, you will get an extra 50% increased total resources, making it so you never have go on mills ever again*