DESCRIBE THE ISSUE IN DETAIL (below). LIMIT TO ONE BUG PER THREAD.
During the USA Challenge - Louisiana, the task is to Build 3 Town Centers during a Skirmish/Multiplayer game on the Bayou map. I “began” the Louisiana challenge and tried three times as different civs (British, Portuguese, and Ottomans), built 3 town centers, and finished the game. However, the challenge was not completed after quitting the post game.

USA Challenge - Louisiana level is passed and players can play the next challenge.

A screenshot showing I can’t progress 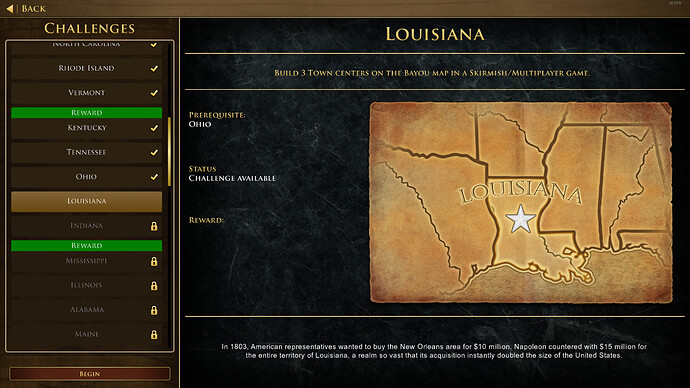 Uhm… you need to build 3
Since you have a buildimit of a towncenter is 3, you need to destroy your starting towncenter and rebuild it…
Challange done.

Interesting… I’ll give that a shot.

I still think this should be considered a bug or at the very least a strong community suggestion. Given the instructions saying to build 3 Town Centers and the fact that the build limit is 3, in English, this is heavily implied that 3 Town Centers should do it without having the need to destroy your original and rebuild it.

Look at it as a puzzle that needs to be solved. Don’t blame others just because you dislike their instructions. You didn’t build your starting TC so you’ve gotta delete it or another after building it (or play ports and go age iv).

Its definitely a good puzzle

But, on the contrary, it is not something most users would probably think or interpret for the instructions. All it would do is cause players to get frustrated and quit playing. Like those of us that are very passionate for the game, will research and do what we have to do, but the average player shouldn’t have to do research to figure out how to play a game. The Town Center especially is a very unique building and when they say to build 3, most people would probably assume a total of 3 meets the objective.

Play the Portuguese and get the Industrial Age, very easy