we need a campaign by ragnar lotbrock or his sons the ragnarssons, a campaign by the vikings would be spectacular for us fans of the campaigns. ps: add black color

For black colour, there is already a way of getting it : use one of the colour blindness options, which changes player colour, including black, burgundy, brown and pink.

In the mod browser you can find various custom Viking campaigns and there should be a few mods that change grey to black.

There are plenty of material for viking campaigns fighting various foes from celts to saracens but I do feel the devs left them out for the next expansion.

There aren’t official campaigns, but @PhillySouljah has some really nice ones on the mod workshop. Finehair - The Conquest of Norway, Valhalla’s Edge, Ragnar’s Raids, and Ironside - Bjorn’s Saga are all Viking themed campaigns you could try by him.

I did not know that with color blindness the color black was activated, thank you!

Of course, but I say that it would be good to make campaigns with cinematics like all the others.

Yes, Ragnar’s Raids is about Ragnar and Ironside about his son, Bjorn.

Stay tuned for the sequel/remake of Ragnar’s Raids coming soon!

As other people have said there are a bunch of custom campaigns and scenarios for the Vikings, another one I’d recommend if you want a more vanilla-like campaign is “The Jarls of Jelling” by Bassi

My campaigns in chronological order list has a section for custom campaigns (Still WIP, but with a lot of campaigns already listed) check it out

Stay tuned for the sequel/remake of Ragnar’s Raids coming soon!

You wanted Vikings? You’ve got Vikings!

Announcing the release of Ragnar’s Saga, an all-new re-imagining of Ragnar’s Raids – my largest and most ambitious scenario yet! 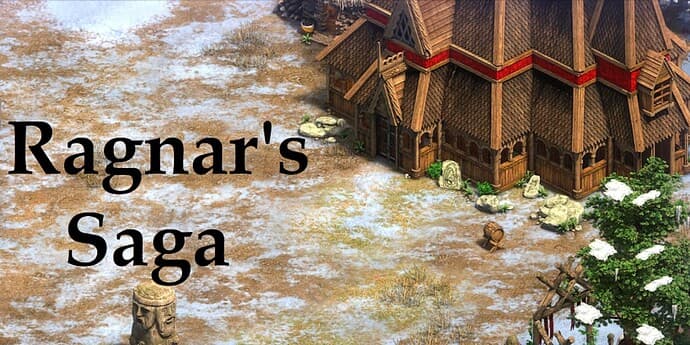 As legendary Viking king Ragnar Lothbrok, raid and conquer to become a legend of the sagas!

Rise from a petty jarl through raids and plunder to become King of the North and master of the Great Heathen Army in the largest and most ambitious custom scenario ever. Ragnar, your warbands await your command!