Plz make a Wall limit! Max. Walls you can build. 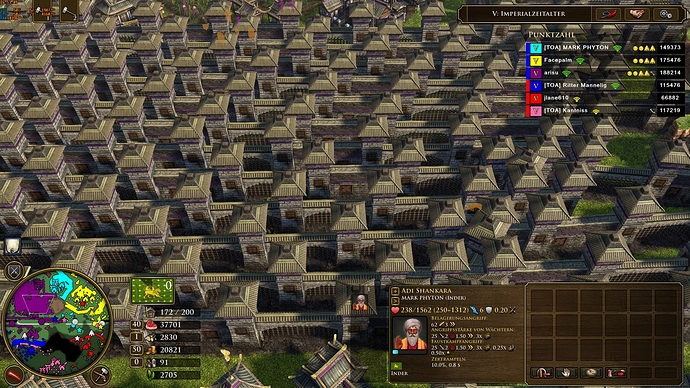 or what think the rest of community?

I think it’s sort of your fault if you allow them to make that many walls.

In your screenshot they are all age 5, which takes 8000 resources to reach, after spending thousands of other resources. That, like many other late-game upgrades that can be weirdly overpowered, takes the whole game of counters, upgrades, getting ahead, away from the game, even as simpler as AoE3 is over its counterparts. A lot of players when suggesting balance changes don’t play treaty/peacetime modes or simply take time to build like this. Balance changes aren’t for players who play the easier mode, no offense intended, but it’s for pros and for intermediate RTS players who understand and find under/over powered things. You simply won’t reach it to this point against any normal RTS player or especially above-average one who played other games than AoE3. The only thing your screenshot misses is a timer which I’m sure says over 40 minutes.

Similar to on AoM and AoE2, they should consider a reduction for walls on re-releases. Wooden walls are pretty good the way they are in health. But I suggest they should do some of these:

then things like the cards for walls maybe other civs that gives team boosts to walls/buildings would become more unique or useful too (even though that is inbalanced to use teams too, the balance on any ensemble game is really for 1 v 1 play)

In other words, I disagree, but I think wall health can be reduced slightly and cost/upgrade can be increased slightly.

treaty 25 min is enough to reach imp, all eco upgrades, and upgrade one unit to imperial. There will be walls but not this many after 25 minutes. no idea who told the devs to put 40 min treaty into matchmaker…

imagine playing treaty and asking to limit the walls

i wonder if he downloaded a program to do that automatically

I think in Treaty should limited the walls.

Other game modes open to use.

In late game once you got all uograd and a factory left it there is always surplus wood. Walls aren’t particularly expensive at thsz point either. So you should have 1 villager at all times just building more and mkwre walls in imperial age.

If you gain ground, more walls.
you got pushed, repair walls.

In aoe 2 stone is much more rare and gets only rarer. Aoe 3 is quite the opposite. It can make super lategame become reaaly stagnating with anybody unable to gain grounds due to pop limit and gaining more resources than one can spent.

Alteast trash wars end when all wood runs out in aoe2.

My last game lasted 3h and my side was only able to win after the Dutch player stacked so many 5% HP cards from South Africa that he could march trough with 800 hp halberiers destroy building.

a Good thing will be to add a automatic resource they generated at time and with this resource you can build a wall, like the asia CIV wiht they exports.

Probably 40 min treaty is completely for the new players, in age 3 everybody using rush for the right reasons of course and the game is not for newbies at the moment (never been), treaty is helpful about that