I encountered this mission today while playing through the Warchiefs campaign on hard, and this is probably the most difficult mission I’ve encountered so far in DE. I wanted to see if anyone else faced any issues with the tuning on this mission. For those that played the campaign before DE, this mission used to be Red Cloud’s War and involved defending railroad workers from Lakota raids. Before, the units that you would face were Club Warriors, Cetan Bowmen, Wakina Rifles, Axe Riders, Bow Riders, Rifle Riders, and the occasional Tokala Soldier. However, in DE these units became Pirates (400 HP Treasure Guardian version), Pistoleros, Revolutionaries (Skirmishers), Dragoons, Comancheros, and Stradiots. I believe these outlaw/merc versions spawn at the same rate as whatever units they replaced, which greatly increases the difficulty of the mission as I was getting hit by 2 Stradiots just 4 minutes in as seen below when I think they used just be axe riders:

Even worse, by 7 minutes in there were at least 6 Pirates (2400 HP!) on the map with Renegados not being able to counter them since they were the treasure guardian version and not counted as heavy infantry 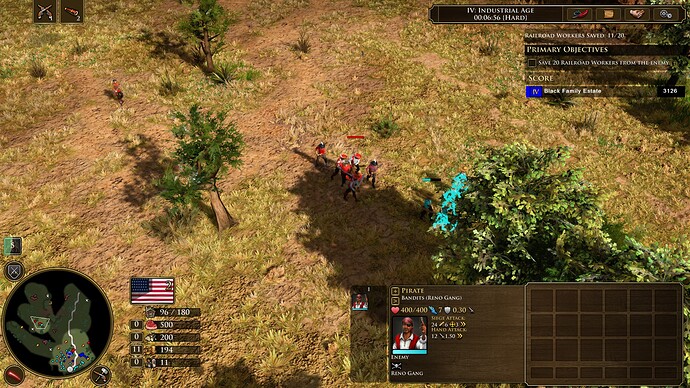 Has anyone else faced problems with this mission, and do you think it needs to be reworked?

You need artillery for this mission.

It’s pretty easy. You need to split your units in two and defend home. You need to spam horse artillery or falconets at home, can’t remember which one you get, and have some units defend them.

The beginning is rough and you may need to keep moving your army back & forth. Focus on defending with your towers at start.

Use your minera to get gold fast and hire mercenaries from the saloon, as well as sending artillery if you have the shipments and settlers to chop wood if you’d like to build more, or even a tc. Wakinas are a good unit for this scenario too, but get mercs.

Yeah, everyone is right. You gotta get artillery. The AI also is programmed to be a pain in the ■■■ - if you send your entire army outside, they will always counter attack you while you are open and vulnerable back at base. So you’ll always have to end up split-popping in these campaigns.