We need to quit obsessing over >1600 elo civ win rates

I’ve seen a GAZILLION references to civ win rates > 1600 elo over the past while, with everyone trying to argue this and that is OP/UP, etc.

After watching most of the N4C qualifiers this weekend, I’m convinced looking at >1600 elo for reference info is maybe the worst possible way to judge the game. I actually think looking at the overall win rate (all elos) is probably more appropriate. If you want to narrow down, look at 900-1100 elo as that’s where the majority of players are anyway.

Looking at the overall win rate, you see every civ but China falls in the 47-53% range. Not actually all that bad. This roughly matches the 1000-1100 elo stats, where the average player lines up. Takeaway is the vast majority of players are NOT getting routinely matched up against a Civ with 60% win rate at their skill level.

I do think we can conclude China probably needs some love, as they are terrible at virtually every elo. Throwing win rates out the door, I still think China needs some adjusting. Grens are objectively ridiculous. Go watch them. Most overpowered unit in the game. They need to be nerfed, regardless of win rate. They also probably need to be more accessible (getting significant numbers of them them is extremely rare due to cost/techs). China probably needs some buffs in other aspects to level out their gameplay. I won’t claim to know exactly what those should be, as I’m not especially familiar with China on the whole.

Looking at the N4C qualifiers this past weekend, guess what civ had a losing record? Delhi. At least for what I counted up from the round of 48 thru finals on liquipedia (note a few matches don’t have civ results shown as of this writing, and I won’t swear I didn’t miscount one), I believe Delhi had 17 wins and 20 losses, including mirrors (that’s 46%, and would be lower if you threw out mirror matches). Guess what civ has the HIGHEST win rate at elo >1600? DELHI.

Conclusion? This game’s pseudo-meta is garbage. The vast majority of players, even at >1600 elo, aren’t close to understanding how to play with and against all the civs. This results in Civs APPEARING to be OP or UP because people (especially at high-ish but not absolute tip-top elo) are trying to follow the crowd with their gameplay when the crowd overall is wrong. I don’t think the meta now is any more settled than the meta leading into Genesis when everyone thought French was OP until Genesis showed otherwise.

I think we need to start discussing specific aspects of the game that are overperforming or underperforming (e.g. fire lancers, siege. fishing ships, grenadiers, elephants, knights, xbows, Delhi sacred sites, HRE relics, etc.). I think we know enough to say, for example, the nerfs to warrior monks grabbing relics and scouts grabbing deer were needed to encourage counter play. I think we can look at that now and say, hey, HRE gets way too much benefit from relics to have their monks running back at 1.12 speed. We need to improve counter play against HRE grabbing relics super quickly.

We are over-generalizing with the “XYZ civ win rate is too high, that civ needs nerfs” argument. It’s not constructive, and if the N4C qualifiers are any indication, probably not even accurate. We need to be talking about “Delhi Tower of Victory is never used, it needs rework/buffs/bugfixes”, “English Abbey of Kings is never used, it needs rework/buffs/bugfixes”, “HRE Palace of Swabia is absurd and needs to be tuned down”, “Chinese grens are way too strong and need nerfs”, “Chinese dynasty costs are too high”, etc. “Mongols OP, Delhi OP, China UP, etc.” are too generic for the current state of the game. It’s possible for some aspects of a civ to be way OP, some to be effectively useless, and neither of those be meaningfully reflected in win rate stats.

We need to be looking at each choice a civ makes (do I make this or that, do I age up or make military), and trying to make sure each side of every choice has a compelling argument in common circumstances. We need landmark selections to be close to even at every age. We need every unit to be produced regularly. Every tech to be used regularly. Every unit ability to be used regularly. I think if we get to that place, where every civ’s every option is competitive in a reasonable number of circumstances, then we’ll have a game much closer to what we want.

Tournaments are usually a good indicator (albeit a small sample), but you also have to take into account the average rating of the players facing each other to get a better rating.

The most relevant balances should be oriented at a medium/high level (unless there is an aspect in low elos like the FL of China in their time) because they know how to squeeze civilization better.

Looking at the overall win rate, you see every civ but China falls in the 47-53% range. Not actually all that bad.

It’s almost like it’s practically random. Win rates pulled out of a hat or something… which is about what you’d get if you had a bunch of people who don’t know how to play properly, don’t really care about winning, or scouting, or countering… they pick whatever civ they want to play regardless of the map, they train units blind, whatever they feel like, and then they have a big battle and somebody gets lucky because they managed to counter their enemy… You have about a 50% chance of winning with that strategy, because you didn’t bother checking what the enemy was doing.

Yeah, he said that English are almost unstoppable. He also said that you have to be a micro God and not make any mistakes for that to be true, otherwise you just lose.

As for high level play, I think it’s one of the things that is keeping the game going. A lot of people I think only play this game because they watch much better people play this game, and it motivates them.

I don’t disagree with any of that. But I think civ win rates should be the LAST component of the discussion. Too often they are the first. We need to focus on diversifying game play and having more viable strategies for each civ. I think at this stage that will balance the civs more than anything else.

Every Delhi game shouldn’t be a Feudal all-in scramble for sacred sites (I made a separate post about that). Every HRE game shouldn’t be fast castle relics. Every English game shouldn’t be Council Hall Feudal push. Every French game shouldn’t be Royal Knight rush for 15 minutes before Castle age. There should be 2-3 different ways to play each civ that are generally viable. Abbasid should want to make camels and camel archers in most games. Mongols should want to use Mangudai at high level play. I think having diverse and viable landmarks that provide meaningful but different benefits that push you in different directions is probably the best way to go about that.

With a few exceptions (Chinese grenadiers, Mongol Khan sheep sniping in dark age and, well Khan generally in Castle, repair rate across the board), I don’t think there are very many things that really need direct nerfing. I think there are a LOT of things that aren’t compelling and need to be buffed so we want to use them.

We need to focus on diversifying game play

Clearly. We also need balance though, and imbalance is unmasked and exploited at higher elos, not lower elos.

I love watching high level play. I’m not saying we shouldn’t balance for high level play. I’m saying we shouldn’t obsess over the >1600 elo civ win rate like it’s some kind of end-all-be-all definitive statistic. It’s not. It reflects common knowledge of top (but not the very tip-top) players. It CAN BE WRONG, EVEN VERY WRONG, before someone invents a new build/strat that changes things (which happens all the time). I bet if you check recent tourney stats, you will find Mongol and Delhi tourney win rates are not as high as the AoE4World stats imply, because top players spend more time learning to counter the civs with the highest pick rates that are perceived as the strongest. That shows up in tourneys.

I think most players could pick any strat used well in the tourneys (say Beasty’s approach to English), practice the crap out of it, and move way up in the ladder even if they don’t have elite level micro. Ultimately, the counter system in AoE4 is really strong. Even in tourney games, a significant % of losses come from people making the wrong unit (failing to account for opponent tech switch, or otherwise guessing without scouting and just having the wrong composition for the situation). Rarely do I see tourney losses where people made the right play and were just overwhelmed because the other civ was stronger. Usually it’s either made the wrong play, or had an execution mishap (didn’t see a raid and lost a bunch of vills, or got army badly out of position and took a really bad fight).

Your Dehli winrate arguement for N4C Qualifier is so selective.
I looked up some of the Delhi wins and loses by players. Lucifron beat Dehli 2x before playing Mista.
Vortix beat 1x Delhi before facing Mista. Mlord beat 1x Delhi. Leenock beat Delhi with Chinese. But all that vs Players who are arguably weaker.

Which is why I personally think we should be looking at 3 winrates: >1600 elo for the very top, >1400 elo for the top 1000 (approximately), and >1200 elo for most decent players. I don’t think looking at 900-1100 elo is very helpful; to be blunt, most players in that range aren’t affected by civ balance at all, because they don’t properly macro or micro or balance their eco or do a proper build.

Also, tournaments are more prone to statistical variance than the ladder simply because less games are played during a tournament, and tournament metas may warp depending on which top players are playing and who gets matchup-ed with who. In essence, I think >1600 elo ladder winrates are a better indication of balance than tournament results.

Imo >1200 know enough about the game to take advantage of the basics. But 1600+ suggests what does and doesn’t work consistently at the highest levels.

One thing us clear Mongol has been at the top of each patch older than 2 weeks, virtually across all elos… please buff everyone else or nerf mongols…

agree, stats of 1600+ is too small of a sample for balance in a general sense.

The stats of Elo 1400+ or 1300+ may be more suitable for a general discussion of balance. but the newest patch is still fresh, it needs at least 2 weeks to get a reliable read.

and China is not weak at all, we shall see the 1400+ stat reflect just that in 2 weeks.

is there a graph or table or anything which shows server pop by elo?

Chinese is still OP
51% WR
Just no idea that why those ppl still crying Chinese weak.
1300-1399 could also represent most ave players’ performances. 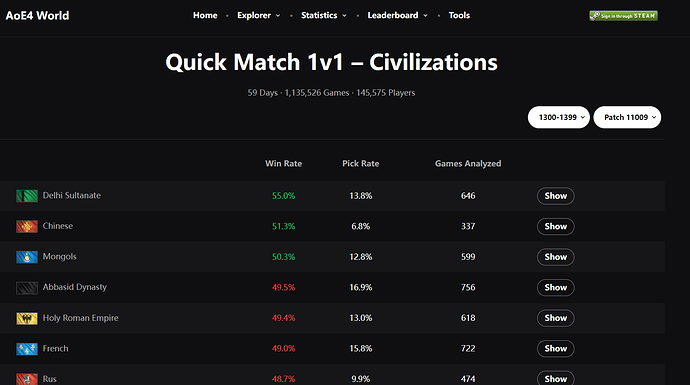 I am not sure about China OP or not, but you showing only the stats of 1300-1399 when the new patch is only a few days old are not really supporting your conclusion.

we shall see how China does at 1300+ in a couple of weeks for a definitive answer.