What do you think about the documentary-styled campaigns?

I am very very skeptical about them.
And I become even more skeptical when I realize that I haven’t seen a single cinematic cut-scene as of now.

Does this mean that for the shake of a documentary-style campaign, we are not going to have any movie-like, cinematic scenes in-game?
That’s a personal favorite feature in every game. Enjoying a well made cinematic while playing adds greatly to the overall atmosphere, to the immersion and storytelling of the game.
Cinematic and well made animations often give you the feeling of watching a movie, but instead of just watching, you are participating to the formation of the story’s development.

I am certainly not willing to cede this feature for the shake of a couple drone shoots taken in real life locations that I could easily find by doing a quick google search.

And although I am very pro-having historically based visuals for the game’s units and buildings that are on par and make sense with the rest of the historic framework, I do not expect Age of Empires to educate me on history.
But I do expect it to offer me great entertainment as a game that is.
To quote the answer of Bruce Shelley when during an internal Microsoft meeting, Bill Gates commented that Age of Empires should be an educational product (according to his words):

“I don’ think so, it won’t go anywhere unless we entertain people first”

And on another occasion:

“If you build in too much historic detail, you run the risk of making the game obtuse. The players should have the fun. Not the designers or researchers. We are trying to entertain people, not impress them with our scholarship”

I agree with both of these statements from the bottom of my heart and it certainly doesn’t mean for me that you have to propagate historical fallacies to create a fun game. There’s a very large gap between that and turning a game into a documentary and scrap its cinematic/immersive fun side.

I have watched hundreds of documentaries in my life, and I can watch a hundreds more whenever I want, whether Age of Empires IV exists or not. But I can’t have whenever I want the immersive experience and fun that I expect a game to offer me.

These are my thoughts and I am looking forward to know everyone’s opinion on that matter and if the rest of the community actually shares similar concerns.

I am actually looking forward to see how the documentary aproach works out. It gives great educational value and might be made in an immersive way, combining nicely with the rest of the game. Of course we have to wait and play it to see how it actually turns out, but I hope they can pull it off.

I didnt quite like the artstyle and the ghost workers UNTIL they showed the documenary style gameplay. I LOVE it. A documentary about ME building MY empire

On a second thought, considering how most nowadays documentaries make use of animated short clips to communicate their information in a more fun and engaging way, the game could just as well have created short cinematics instead of drone shoots for the campaign’s narrative. AoEIII had plenty of those and they contribute greatly to the overall experience.

I will probably miss the AOE2 style drawings and narration but i’m also very eager to see how well made the documentaries are.

The documentary style is a major selling point for me, actually. Though I love history, I have not read or seen a whole lot on the middle ages. I’ve been focused mostly on ancient era for now. I’m hoping to learn some things.

I thought at first it might be janky, but clips from the recent trailer made me think it might actually add to immersion. I like how they transitioned from real life footage to in game footage.

Does this mean that for the shake of a documentary-style campaign, we are not going to have any movie-like, cinematic scenes in-game?

Emmm , we don’t know. I think maybe we can have one of those but I really prefer this new way of presenting the campaign . I like it so much

also these movie like cinematics…where did you get the impression we would get them?

Age previously only had a spoken wall of text before each mission, and some in game action with dialogs that played automatically. Age 3 had sme small but 3D cutszenes before and after each campaign, I think (but still with ingame models).

Age 4 will luckily have around 3h of movie footage probably taking over the plain read texts from before.
I doubt however we will have a live ingame switch to a video and back to gameplay. There it will probably agaon just be scripted ingame scenes

I’m more afraid that the “documentary” is more based on 19th century cliché Middle Ages than newer research.
The English/Norman campaign trailer is so wrong it hurts watching it.

I don’t want to have to write essays about all the mistakes the documentary made.
That’s especially problematic for campaigns on topics I don’t know much about because I can’t trust anything I hear.

I’d take quality over quantity missions any day as it can easily get repetitive having more missions just for the sake of having it.

It sounds like they have put a lot of work into the campaigns which I like the sound of that. I’m very curious how the documentary will work in between the missions.

also these movie like cinematics…where did you get the impression we would get them?

I got the impression that we won’t get them, not that we will get them.

I wanted it and kind of expecting it as the examples of other games are numerous, it is a great feature and I really do not think it of it as a high expectation. You can take Iron Harvest as an example which is also an RTS. It has a great campaign, full of such cinematics. It really adds to the immersion.

Age 3 had sme small but 3D cutszenes before and after each campaign, I think (but still with ingame models). 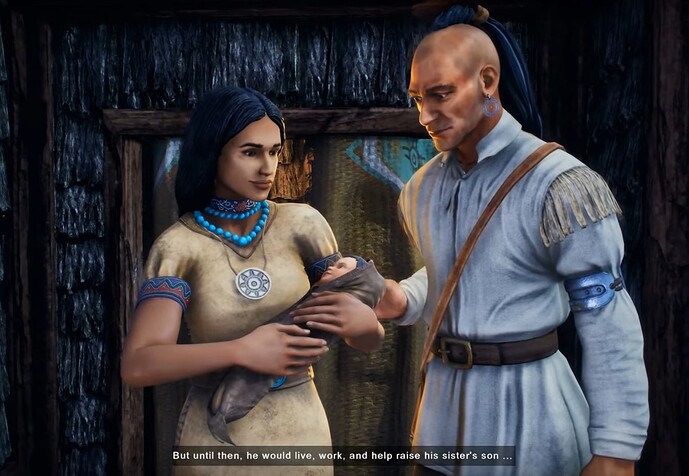 Cut-scenes with the in-game models is the least one can do. If you want to see a campaign with cut scenes only of in-game models, take AoM as the prime example. It’s still a great campaign but that was back in 2002.
Doing some nice movie cut-scenes for the needs of the campaign was expected for me today. Unless of course you opt for a documentary type of style and replace all of that with drone shoots of real life places and cities, filled with golden transparent models.

I’m more afraid that the “documentary” is more based on 19th century cliché Middle Ages than newer research.

I don’t know much about because I can’t trust anything I hear.

That could also be an issue. Considering how even actual documentaries can make lots of mistakes, makes you wonder how accurate and how much seriously can a documentary of a video game be taken. But I don’t want to judge that yet.

wait, wasnt aoe 3 just also pictures with some spoken text basically? maybe i misremember, I played through the DE, maybe they werent there?

And yes, I meant where did you get the expectation the game should have them

The documentary style videos are cinematics though, so…as you expected?

OK, you dont want to write an essay, but could you quickly elaborate? From what I saw, it seemed kinda okay, it isnt like much was shown of that campaign yet, so what are the inaccuracies? (out of curiosity)

wait, wasnt aoe 3 just also pictures with some spoken text basically? maybe i misremember, I played through the DE, maybe they werent there?

I haven’t actually played the campaigns in the DE to know all the differences but this is taken from it. I was talking about the original before. Where did you see the picture? That’s a screenshot that I took for you from the in-game animated cinematic. Yes, it is a picture in the sense that is part of a sequence of other pictures. An animation.
It is not “on the fly” rendering with gameplay graphics. They are full motion pre rendered graphics from a video file.
This is the difference from the ‘cinematic’ drone shoots which are not animated art, they are taken from real life.
I don’t know what’s so hard to understand, you must have certainly seen cut scenes from other games before.

no, its simply that I dont remember them being animated, i played 3 back in the day, too.

Well yes in that case its cinematics, but they cant have been very impressive, I think. Because I would remember. I even remember the age 2 pictures, and these were pictures. But thats another topic.

So you expected cinematics bcause of age 3, and thats what we get, but in rela life this time ?

Well, a trailer (or documentary) saysing “promised the throne” while he wasnt actually, I wouldnt see that as a huge historical flaw tbh. More of a more picturesque language

I dont know if the viking age was over at the displayed point in time, but it seems you do. that would be consederably inaccurate, yeah.

I am not very good with times/dates though and mainly influenced by series, but in “the last kingdom” while they are called danes already, they are also considered vikings.

Apart from that, which is likely wrong or another time period, I thought vikings basically simply means to raid, so danish raiders could be considered vikings. But it seems I am also mistaken there.

Anyway, it is possible the trailer/marketing texts did not get the entire picture of whats displayed, i guess the full campaign will show. I believe the devs if they say they researched a lot.

The Danes weren’t raiders anymore.
The Danes had controlled large parts of England before and when William conquered it a lot of the population, especially in the North were Danish.
They aren’t raiders anymore they are inhabitants.
The trailer likely also referred to the Danish army attacking England later, but those weren’t raiders either. They were a normal European Medieval Army led by a Christian King.

I See. Thanks for the explanation

The Viking Age is over.

I don’t think this is entirely true… When Harald Hardraada invaded England, he did so with, mostly, Norwegian soldiers that could be considered Viking, since they were still pagan for the most part.