What is the siege tower for?

i think there is a big problem, in age of empire 4 no one creates it, the siege tower is practically useless, I heard about beastyQt, it said that many pro players would prefer stone walls in the 3rd era, but if so, what good would the siege tower be? I think it would have to be changed, still the only thing that can be done is to put units inside and make them go on the wall, like a transport ship, but if instead of this mechanics, which forces us to migrate the military, when the tower was hooked to the wall, it became a simple staircase? what I mean is that you shouldn’t constantly migrate the military, because they would climb the wall by themselves, with the actual stone towers in the game, this happens, when you build a stone tower, you automatically create a door, which allows the units to climb the wall, I think it would be nice to see such a thing with siege towers, I am aware it would change the gameplay a lot, but it would make them much more useful 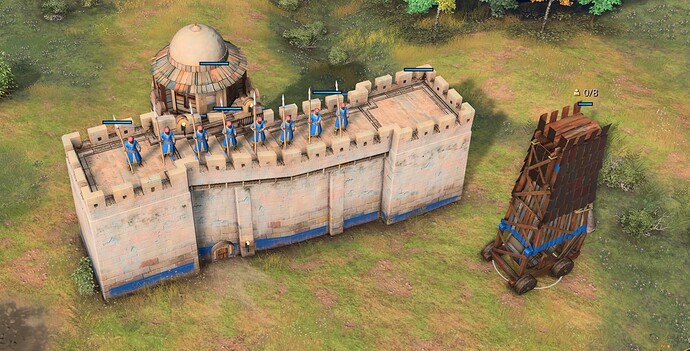 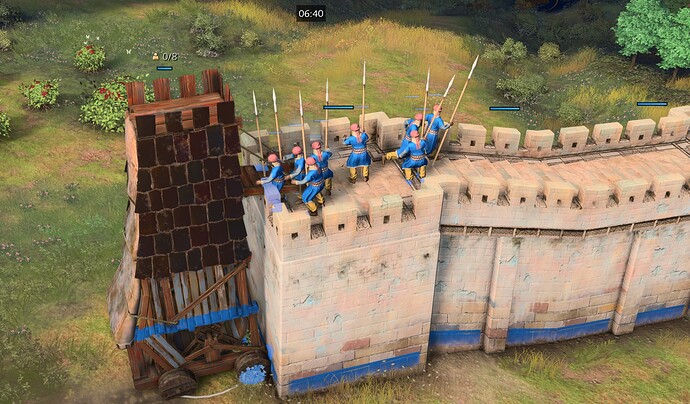 you can only put 8 units, but I think it would be better if you function as a ladder 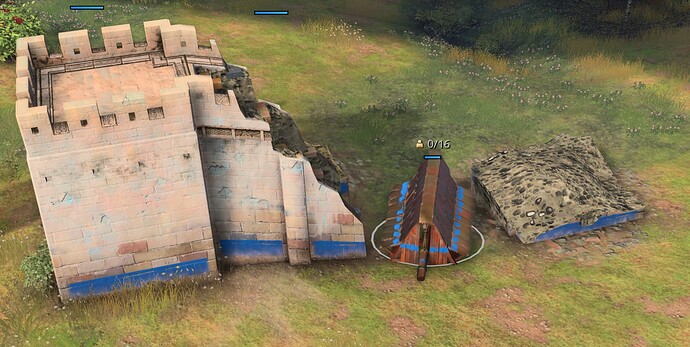 or you could add some archers inside, when you put some military, not many, but you need something to make it more useful, I think Yeah making siege towers a staircase has been suggested many times. I think it’s the absolute minimum that would be needed to maybe make them useful.

I think it should also drop a ladder down the other side of the wall though.

They’ll need to first address the issue with stone walls getting destroyed by siege weapons way too fast in it’s current state, as there is no point right now to siege the walls when you can just take them down in 2 shots from 4 cannons.

Then they need to make more benefits to have soldiers on a wall, to make it more attractive for players to use it, then you can start to use the siege towers that will have much greater need when the walls aren’t getting destroyed as quickly.

It’s a tricky thing to balance and to be honest at this point, I sadly think that the developers doesn’t want to focus too much on that, as it’ll require a lot of work. Perhaps later down the road when other more important things have been added/addressed.

I think the stone walls are in a good place.

It shouldnt take population cap.
It should act as a staircase.
And garrisoned inside the siege towers ignore the defensive bonuses of units ontop of walls.

Gates should be able to be opened by enemies if they were to capture(standing ontop) of the gatehouse. Causing the door to stay open. (One could block the gates from closing in aoe2 by keeping a unit standing under it if opponent went through and didnt kill the unit, or by sinply standing under the gates themselves)

That way wallfights because a nescessity if you dont want opponents to simply just walk through your gate.

It becomes much greater at early game, giving a better reason of having stone walls in age 2.
But it also saves defenders a lot of resources in order to siege theough wall.

They’ll need to first address the issue with stone walls getting destroyed by siege weapons way too fast in it’s current state, as there is no point right now to siege the walls when you can just take them down in 2 shots from 4 cannons.

That’s true I didn’t think of that.
However trebuchet is available earlier in the game and is enough to take out stone walls pretty easiliy.

I still stand down to the fact that if we want to see more of siege battles taking place, they need to do many adjustments both to the siege towers but also making stone walls more attractive to people to play it more defensive play etc.

siege towers are a good way to avoid being seen by enemies, if a trebuchet attacks, they hear the alert, if you climb up the walls, they should hear nothing, and it is an opportunity to build a base secretly, or attack without them noticing

I definitley agree that it should act as a staircase to get onto the wall. I think they’d see more use if walls were stronger and units couldn’t climb up the ruined parts.

yeah, maybe devs thought that everyone make gates on the walls, but not everyone does, there are players that just make 1 gate on a big wall, so imagine running all your 8/8 units every single time to the gate lmao

Siege Towers are useless because they’re clunky and lacking versatility, but they’re part of a bigger problem regarding walls in general. Some ideas:

This opens a new level of strategy where walls can be breached in 2 ways instead of 1. Gates become more relevant and should be more guarded or better positioned. I can see improvements on the importance of patrolling, placement of Outposts or Stone Wall Towers and their emplacement choices, choice of the type of wall and raid mechanics.

I agree that siege tower acting like a staircase would be better.

Maybe make it a “consumible”. It will cost 3 population, but once used on a wall to make the stair it will be deployed and would not use population.

Must have some HP, and can be killed by units or enemy siege.

The population cost before deployed should avoid players to spam stairs in enemy walls. Otherwise walls would be nonsense.

However trebuchet is available earlier in the game and is enough to take out stone walls pretty easiliy.

towers == stairs + stairs to go down.
it will fix: stone walls being annoying and it will fix siege tower.

thread title response : for nothing .

Thats it boys , no further discussion is needed

What is the siege tower for?