Why are Scorpions anti-infantry + archery, but not anti-cav?

I just had a short conversation with @bigbossbro08 in the elephant buff thread.
He told

How would you buff the Battle Elephant?

Which I can’t proof cause I lost my OG Disk from then, but I believe it’s true.

So the question is why does it now counter infantry and archery? Especially as Mangonels do the same (probably more anti-archery than infantry but nontheless).

It feels kinda redundant and as mangonels generally are considered the better of both and also counter scorps it’s no wonder we see scorps very rarely.

Is there a way to make scorps indeed anti-cav (at least when the cav can’t use open terrain so the bolts only hit few? What then counters Scorps?
Ofc Mangos, but also? Probably Archers? Would be kinda interesting if scorps had lower range and Pierce Armor but some kind of anti-cav damage (no extra ele bonus damage needed as eles are slow). Imo this could be an intersting change to the unit, opening one more option to counter cavalry.

I think I saw it somewhere at SOTL video. Probably a year back or less.

honestly, in a practical sense and both historically, it would make sense for scorpions to counter cavalry since they are supposed to shot big darts at a slow pace, they need to be aimed at big expensive targets. infact, in other strategy-war related game like Total War saga, scorpion-like units have bonus vs cavalry/elephants and big units in general

so yeah, this bugs me too. but sadly i think a change like that would be too radical at this point for the game, especially if it seems to me like cavalry is supposed to be the counter to all siege weapons…but maybe i’m wrong. 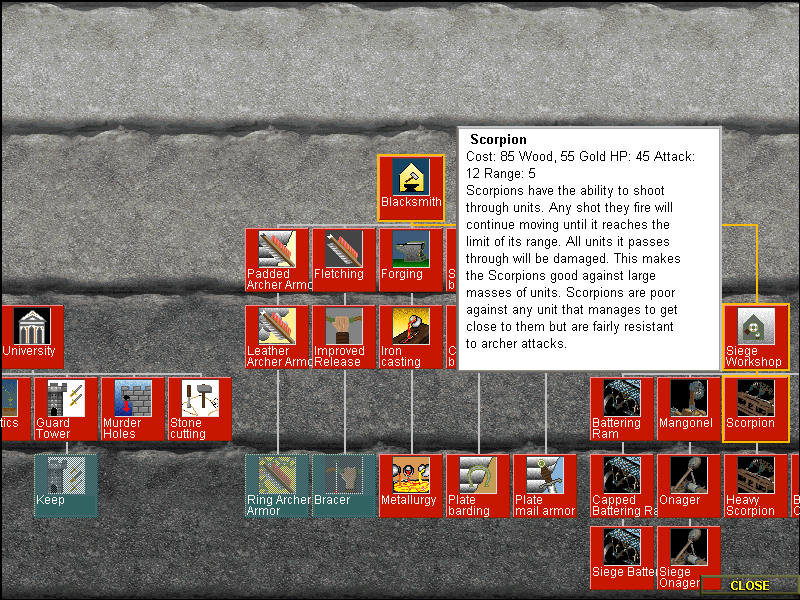 image800×600 67.9 KB
This comes from an AoK beta, as you can see it hardly looks like something that’s supposed to be good against cavalry. Quite the opposite, even.

What about the AoK manual? 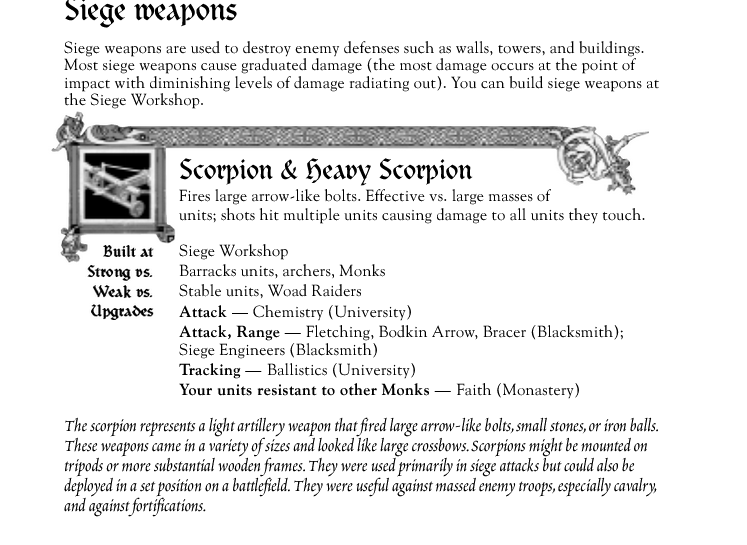 Only the history segment claims they were good against cavalry in real life, but in game they are clearly intended to be weak against anything that can close the distance quickly.

Speaking of in-game, their role is to be a siege weapon easier to use than the mangonel and I think they do that perfectly fine in castle age, and as such they are decently used there. Only the heavy scorpion is underpowered, because for some reason someone decided they would get less stat increase than the onager does, and it’s only partially fixed with their recent buff.

OK so the game never claimed it would be good vs cav.

But I think it would be a good idea to separate it more from the mango in terms of utility.

The thing we need to think about is that one of the games most common comps - xbow pike - is actually heavily countered by scorps - at least in theory. But I used it basically not at all and I also don’t see it used often. Most of the time we see skirms against that comp which work usually perfectly fine.

What says that about a gold unit if it can’t outperform skirms against the same countered comp?

As I said, the scorp feels just so redundant in its utility seeing what other options are available.

We see it sometimes from pros as 2 scorps are cheaper and faster to train than 2 mangos, but it’s not a typical play below the pro level. It’s kinda hard to execute for several reasons.

I think that’s already the case. Not only is it better vs infantry (unless you’re a ground attack god) but also vs cav archers and it’s more difficult to dodge tbe shots. Thing is scorps mostly are only effective in a bit higher numbers and have no dmg potential vs buildings.

and then they are heavily countered by mangos…

probably, just probably… is it possibly better to somehow adjust them so they become more effective in smaller numbers as a ranged support?
Like with higher speed or higher base damage but slower rof… I think there are a lot of options. But still I think the main problem is that they are kinda redundand. There are other, generally “better” options for the same utility.

probably, just probably… is it possibly better to somehow adjust them so they become more effective in smaller numbers as a ranged support?

Imo scorpions are a pretty good unit apart from their pathing which feels increadibly akward. Maybe that can be addressed to make them use easier.

Btw balancing units that shoot through other units is super difficult. You can see that with recent patch and dlc. I haven’t tried new ballista elephants but apparently they are completely broken. Still hard to get to ofc but from what I have heard if you get there there isn’t any counter even halb onager doesn’t work properly anymore. Similar with shakram throwers. Useless in low numbers but if you get 40 they kill everything including their ranged counters.

Agree, I think this pass-through damage makes it incredibly awkward to balance that thing.
I think I proposed in another thread a ballista which didn’t had pass through but instead a % of HP damage to a single unit, what makes it automatically anti heavy cav in some sense. It was designed to counter explicitely the high-value units of the opponents.

I would like to see the bolt speed increased.

The problem with its piercing damage is it will always be devastating to tightly-packed units, so archers and infantry, meaning all you have left to counter them is cavalry, which is an intuitive way of countering artillery, they are fast so harder to shoot at and they’ll stay less time under enemy fire. If scorpions also counter cav, what counters them except other siege weapons ? The expensive onager ? Bombard cannons that not everybody has ?

They’d need being nerfed to make up for it to make them vulnerable to archers for example, such as decreasing significantly its rate of fire.

Honestly, I would like to see some sort of anti-Siege armour instead for them. Mangonels counter them way too hard. Since Heavy Scorpion is an underwhelming upgrade, it would be nice for them to get at least anti-Siege armour (similarly to how Rams progressively get less weaker vs Hand Cannoneers/Slingers), so they could tank one Onager shot. Maybe still die to Siege Onagers (or Siege Rams?), but not so much to Mangonels or Onagers. It’s Heavy Scorpion, come on!!

I think giving them anti-Cav bonus damage would have to mean a serious reimagining of the unit, though reducing the range probably also kills them completely (the knights just tank the first shot and then reach them and start bullying due to the minimum range). Besides, they kinda are anti-cav in mass too, especially when you support them with Halberdiers.

In AOE4 since they could start over from the ground up, the springald (= more historically accurate scorpion for the middle ages) is indeed mainly anti-siege and anti-high-value-targets. But it also has a very long range, it would probably be on par with the bombard cannon when it comes to that if the same was done in AOE2.

OK so the game never claimed it would be good vs cav.

I am positive it did. I’ll need to check the OG disk (I was a wee lad when it came out and it is at my folks house IIRC) to be sure, but don’t disregard it too soon.

I wouldn’t be opposed to an “anti cavalry siege unit” as a unique units tbh. Or even a super long ranged Scorpion that doesn’t do passthrough.

Except @CactusSteak2171 literally just provided the excert from the game manual where it doesn’t claim that.

probably, just probably… is it possibly better to somehow adjust them so they become more effective in smaller numbers as a ranged support?

Perhaps not a popular opinion. Imo few mangonels> few scorpions. But halbs/champs+ mass scorpions> halbs +mass onagers when you are pushing with infantry+siege.

They do counter cav already, you just need numbers and pikes as a meat shield with or without monk support. And in late game with all upgrades you could even get away with pure all-in scorps, especially if your civ has a bonus like Khmer or Chinese or a siege bonus like Celts, Teutons, Ethiopians, Mongols etc.

wouldnt pikes as a meat sheild be doing a lot of the heavy lifting?

No because the scorps are doing most of the damage

I think these adjusted scorps would be accompanied by skirms or other stuff then.