Can someone explain the rationale behind this server patch?

China early game WR has always been one of the lowest. This patch massively nerfed Song dynasty production speed and the defense landmark, while giving nothing to compensate which is gonna further weaken China’s early game.

Is this necessary, given that we’ve seen amazingly balanced WRs coming from China last patch, roughly 50% across almost all ELOs? Why does China need a nerf in early game?

Seems to me a reactive nerf from devs who are under pressure. If we wanna maintain a balanced WR, should China get some kind of buffs in exchange for those nerfs?

The focus on win rate to the exclusion of all else is not how game balance should work.

Nerfing without compensating is not how game balance should work.

The more convincing data is reflected in the win rate of the conqueror level, maybe they need to give Chinese some features that are more convenient for ordinary players to handle, after all this civ’s performance isn’t too strong in the lower level , especially when facing HRE.

They nerfs seem fair and it probably wont have that much impact on the chinese win rate. After the TC nerf in season 3 chinese song boom became really strong, so they toned it down a little bit Also at high level they are really strong and have one of the highest win rates, only loosing to mongols which also got a nerf (rus has high win rates because of hideout map).

The civ is still solid and it’s in a great spot despite the changes.

Nerfing without compensating is not how game balance should work

Wouldn’t be a nerf if it was compensated for. If the aim was to nerf China, as it presumably was, then that’s what happens. That’s exactly how game balance works.

Much like when things need buffs, you don’t necessarily compensate for those buffs by nerfing something else. Because the point is to buff, and not to ensure the status quo.

How bad are the nerfs??

It’s really bad. 1TC Song dynasty get nerfed hard. It’s like you are more strongly pushed to go 2TC Song to be competitive, which is ironic if devs wanna encourage different strategic options besides 2TC Song.

Really? They haven’t reduced from 35% to 33% the speed production of villagers on song dinasty?Don’t seems so impactuful

Actually, they are playing a paronomasia.
This nerf is far from 2%.

This nerf is just OK, but I’m not sure whether other compensation is needed.
Just wait for further data released.

Hey team, I think we can have a hybrid approach. I propose we keep the original villager train time = 13s on the landmark TC, and 15s for all constructed TCs once unlocked Song. So we can nerf multi TC Song while still keeping 1TC Song a competitive option.

Guys IDK about you but I’m still kinda bothered by the speed at which the barbican goes up. I just got barbican dropped right on my main TC, what are you supposed to do against that. I tried to burn it down with all my villagers which turned out to be a bad idea. 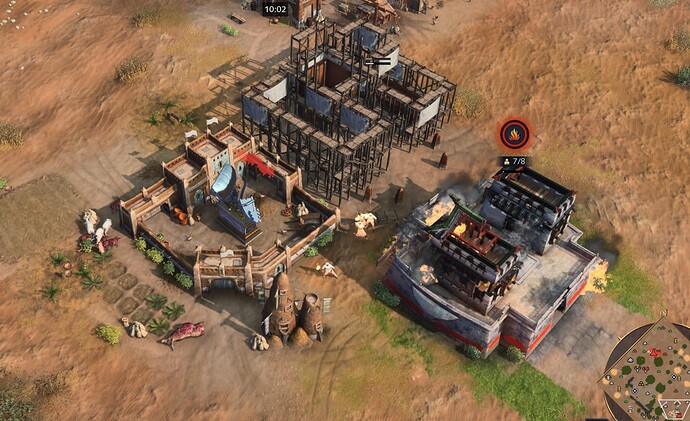 You need to scout properly and see if his villagers are coming. Their BBQ is so close to your Tc, have tried to focus fire with your tc his vills?

I mean scouting and then walling could have worked. But I did but max vills into TC and killed like 5 of his vills before it went up but that didnt stop it. Otherwise just ignore it I guess. Move food eco somewhere else, hope it doesnt one shot vills that spawn out of my TC and kill it later?

Torch foundation with your vills (this will slow down the build speed) and shoot builders with TC, also kill his vils with your vils.

If you scout properly if you can send already your vills to their and start attack them.
If he built on a resorces just move on another one.
The only prob is when he wanna built over your tc. That must be never happen