WHY DOES THIS UNIT OCCUPY 2 POPULATION?

IT DOESN’T MAKE ANY SENSE THAT IT COSTS 2 PEOPLE EVEN CLOSE TO THE BUILDINGS WITH MORE LIFE OR BECAUSE IT BUILDS A TOWER DOES NOT MAKE SENSE , THIS UNIT NEEDS TO COST 1 OF POP OR AT LEAST HAVE A NERF THAT SOMETHING THAT DECREASES ITS POPULATION 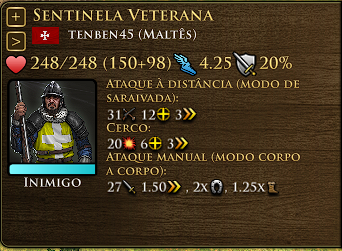 .
SO IT WOULD MAKE SENSE THESE UNITS COST 2 OF POPULATION WITH THIS CARD IN THE FOURTH AGE

It’s certainly no where near 2 musk stat wise, though the buff near buildings is quite strong and building towers is very useful.

I don’t have a huge issue with it, I think the issue malta have is lack of tempo.

I think it’s because they view it like a soldado, with all the hp buffs and rocket card

Maybe a design choice to encourage players not to train too much rifle units and base their strategy instead on archaic troops and cavalry (which makes sense for the knights of Malta).

I don’t really see it as an issue, especially as they become a lot stronger with the rockets later on.

they become a lot stronger

Too much combined with fire throwers, they need a little fix in my opinion

Nah, even with the card, it’s nerfed down to 25% upgrade in stats from the pup where it was 50% and they cost more. Even with the extra 25% they’re still worse than 2 individual industrial age musk. The rockets are a charged ability too not an attack. After the card they just become slightly worse soldados.

Totally Agree. 1 pop cost makes huge difference, especially in treaty games. Only this musk can be the bone army of Maltanes.

This musketeer is really strong, not as strong as 2 musk but it is very cost effective. So making it 2 pop is a compensation. Similarly Hausa maigadi is not very cost effective therefore they made it 1 pop to compensate (despite the stats of maigadi being close to 2 musks).

They are significantly worse than soldados, 50 max soldados can fight 2v1 in treaty vs skirms, sentinals cant even kill skirms if they outnumbered them

musketeers shouldn’t be beating skirms, isn’t that the point?

unfortunately there are some units that just beat there counters and when you make units 2 pop they definitely should beat a 1 pop unit even if it counters it. No issue with sentinel or soldado beating skirms 1 to 1, it’s still a bad trade. Certainly not on the level of units like the eagle runner knight.

Maybe because for the same pop it’s 20 skirms vs 10 sentinels? That’s why they are so bad late game, even worse once the skirms get CIR, Most of the game you’re also using a sentinel with 12 range vs skirmishers with 20 range, therefore though a sentinel and a skirm sat next to each other will result in the sentinel winning any standard fight would be an easy win for the skirms.

It is my feeling that this unit needs a buff. It is very underwhelming and has no place in the late game.

Also cannons obliterate them so easily because they are so few.

Im all for a buff, but honestly I dont think they are underpowered tbh.

They have good upgrades, high melee attack which is always nice if you can close the gap to skirms or fight other units that have lower hp and melee attack etc, but against cav they do well. They hold up good as a defensive unit and if you research the 250 wood upgrade, you get the defensive bonus near enemy buildings aswell.

After IV rocket upgrade they get a strong bonus wiping a lot of units out.

The unit is terrible and easy to counter. Even the AI can do it with reasonable success. The truth is, Malta really needs the tongue cards to be successful in the late game.