In his latest video, arguably the most knowledgeable person on 1v1 meta- TheViper, said that he ranks Tatars as A tier on Arabia- alongside Huns, Franks, Vikings- civs that are undeniably dominant in the current meta, and will probably get even stronger after we get stats from the latest Arabia rework.

Tatars get a lot of things that would make a cav archer civ not able to play on cav archers- thumb ring for free (huge for CA), good eco bonus (Magyars don’t have one for example), decent openings both on scouts and on archers, and the extra damage from hills as a minor buff. They can play on knights in castle age without issues, on camels, on crossbows- they have it all.

Yet, somehow, in raw win%, they still underperform. How? 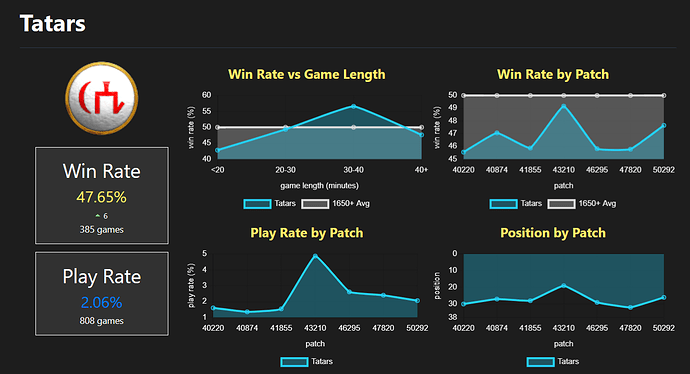 Is it the fact you are required to transition away from crossbows in late castle age? Even then, you can just play on knights and cavaliers. You also get parthian tactics for free so you have an answer to halbs early on. Maybe that in low numbers both crossbows and knights deal with CA very well? Even then, the free thumb ring helps a lot, plus you can open knights, get your eco rolling, and only then go for CA.

In theory they should be the best CA civ right now, maybe alongside Huns. Yet, they are rarely seen in competitive games besides on extremely hilly maps.

I’ve asked me the same question multiple times already.
I think the key is the uniqueness of the civ. Besides they have actually a very strong early game eco, it needs special buildorders for every opener to make the optimal use of that bonus. It is actually shown in the winrate graph that they perform the worst in the eary game whilest they actually should be one of the best early agression civs.
I think that’s the main reason they underperform in the ladder, pretty much like saracens or chinese. The civ just need too unique early game buildorders to be played to it’s full potential.

Is it the fact you are required to transition away from crossbows in late castle age?

Hard to know without seeing how people plays them. Instead, my personal guess is that people goes into CA too early, wasting the best power spike of the civ in early castle age with free thumb ring for the crossbows, while CA are slow to get going.

They only have a 2% play rate. Like it or not, pick rates influence win percentage in two ways.

Personally. I really like atartars. They are pretty well balanced with an awesome UU.

@MatCauthon3 Can you sometimes reply with some argument that isn’t just spitting some random stat, please?

I can read stats on my own, and in some cases like maybe this they’re not necessarly accurate since meta for the civs might not be figured out yet. Discussing should be useful for this, in fact, to get ideas that can help improving the way we play the civs.

@ElizaKolmakov They have a low win rate because their eco bonus is really insignificant and you dont even save enough resources to afford an extra blacksmith upgrade like magyars. Most games are decided in feudal age and tatars really dont have a lot going for them in feudal age unlike magyars.
So the free thumb ring just kicks in too little too late.

Because most people who play this game are bad and therefore do bad even with the best civs (i.e. Chinese)

Try not to read into the stats too much as they are easily distorted by playrates.

That being said the following are my personal thoughts on the matter (disclaimer I am only 1050 Elo):

I often wonder if they would work better being played as a generic cav civ which you then transition into CA or Keshik in late castle / early imp (using camels to balance the odds against other cav civs).

your opinions is correct

Exactly lack of real eco bonus and the transition needed in late castle early imp is awkward, it’s also a civ very weak againt halb rams.
On arena, this civ is one of the weakest is not the worst also so don’t help at all (no hills, free thumb ring doesn’t matter, die so hard to halb rams which is very common, no real eco bonus and based on unit which are not that strong on arena)

Because their bonuses need experience to be used, which not many players get
With 50% extra sheep food means you don’t need many vill on wood, thus wood saved for military buildings and delaying farms, if you puch deer, you can delay farms even more.
Their extra sheeps in castle age means they can actually boom quite well, but you need, again, to adapt and use the bonus in a significant way.
The hill advantage is actually extremely powerful on maps with ton of elevations (Gold Rush, the new Arabia…)
Free Thumb Ring and Parthian Tactics are quite nice bonuses and makes going to Cavalry archers way easy.
Their UU is actually one of the very best UUs in the game, low gold cost and fast speed, plus gold generation.

Because they aren’t the easiest to play and winrates doesn’t really mean anything. Go look at what civs get picked in tournaments. That gives you a much better overwiew of what civs are strongest.

The main reason I can see is that they are predictable - regardless of which unit they choose to go with, Halbs +skirms will be a harsh counter. Now you may argue that their cav archers will run circles around them and that’s reasonable, but it doesn’t change the fact that you can mostly counter them with the existence of halbs + other combinations.

Franks may be predictable, for instance, but they at least have throwing axe-men to compensate - and while both have the ability to use Hand Cannoneers which would help either civ greatly vs their main counters, they can still be countered with the right compositions and is extra gold down the drain.

That being said, Tatars is a very good civ when used with care. To a degree the best Hussars when used with the hill bonus alongside their +1/1 armor, Keshiks for anti scoutsxskirms for gold generation when healed often to increase the benefits, perfect trebs with better range to help snipe castle drops or take treb fights with considerable advantage, great cav archers, exploding camels for anti elephant types when monks have finished converting what they can or the other way around, Steppe Lancers for a soft counter to halbs and archers if micro’d intensively(needs +1 more range to make it similar to the Kamayuk, but with significant changes to the patrol function tbh, and I say archers as well due to being able to hit together rather than single file and not due to any extensive experience with the unit; part of this is just theory)

I am unaware, tho currently I’d say one such composition is pikes x longbows; It does its job quite well.

If they got arbalest would that help them?

I would guess no?

As in giving them arbalest doesn’t really solve any of the aforementioned issues relating to their fuedal & castle ages but instead makes their (already strong) imperial age stronger.

I feel a simple solution would be to have their primary TC also produce 2 sheep upon hitting castle age to give them a small resource boost when they struggle most (though I seem to remember that they did have this at one point and it was taken away so perhaps this is too OP ?)

It doesn’t at around 1000. Ends up being Skirms + Halbs vs Cav Archers +Hussars. Hussars kite the Halbs, rarely taking hits, while also being a meat shield to draw Skirm fire. Unless you micro Skirms to focus Fire every CA they won’t be taking damage. Meanwhile the back line of CA is destroying the Halbs with Parthian Tactics, the Skirmishers’ high Pierce armor doesn’t help because they are not the target. Eventually Halbs die and Hussars clean up the Skirms.

The CA + Hussar combo seems tough to counter for any civ without camels. Paladins can do alright, but with enough Cav archers they still drop quickly before getting through the Hussar meat shield. CA + Hussar can outmaneuver any unit except camels and enemy light cav…