Why is the game still broken?

The anniversary patch made lag WORSE, yes. Once there was a lag spike, it never improved. However, 4v4 has NEVER been acceptable late game on any patch. It has been a huge issue before, and the developers were specifically hoping to improve it as one of their priorities.

At the end of the day the Definitive editions aren’t about age 1,2, or 3, but age 4 and 5. It is a reboot that is gonna cost them next to nothing by over promising, bring players in, hence the Battle Royale rubbish (just are glorified death match imo). Age 4 they are trying to make it out as “Age 2” 2 to a certain extent.

If they opened the modding maybe we could get something better. They don’t want to do that though, else age 1 would have at least some modding.

4v4 has NEVER been acceptable late game on any patch.

Pretty sure most games were fine in some patches

But I could be wrong

A few months ago I played lots of 4v4 and never got any lag personally, but ofc that could be just me

Since they succeeded in boosting weaker / barely used civs, I think it’s time to focus 100% on performance (bugs, lag, pathfinding). Even though part of the community still complains about balance and unit stuff that should be assessed (like cav archers frame delay), I believe that performance should be the priority in the following patches.

I completely share what you feel, the sad thing is that the community is divided into 3 versions of the game now, but all the competition is on DE since theoretically it is the version receiving support and updates, but the changes to the game broke performance and changed the mechanics in weird ways, the game is way more buggy than the experience I had playing on voobly in several different year long stretches… This is sad and I’m sure the one to blame are not the devs, but rather whoever is managing them.

the community is divided into 3 versions of the game now,

I know some parts of the community are playing AOC/UP

But is anyone playing HD now? (Except the people that can’t handle DE) 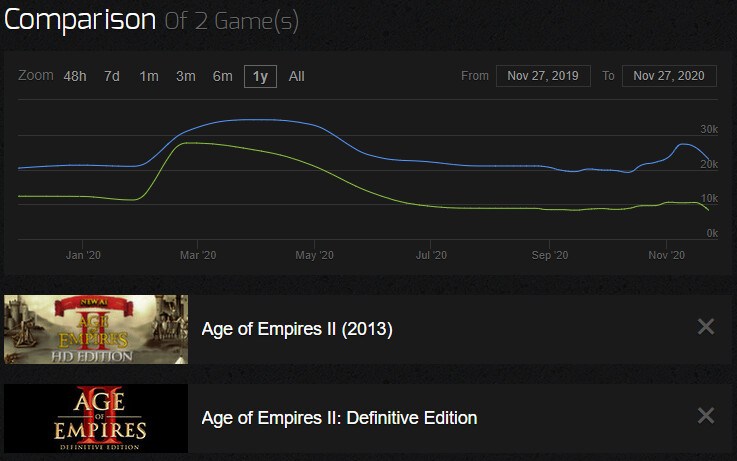 There is still a pretty large player base for AoE II HD.

Note: DE is probably Steam only. Dont know if there are any numbers about Xbox live.

Other player bases (i dont know the size): Voobly, Gameranger, …

Image if we were able to just unite all player bases, so we would have just 1 player base?

I know what this thread needs… some positivity! And I have just what the doctor ordered…

Shout out to the Devs! - Positive feedback II - Discussion

Hey Devs and aoe community! Just wanted to create a new thread in which people can comment the things they love and have enjoyed about definitive edition or just aoe in general. I ask that if anyone has anything negative to say, please post somewhere else, lets leave this as positive as we can and bond over the game we have fallen in love with. A note, im a casual player so my opinion may differ from yours, but here we go! Auto crops, enough said right? Before DE i was so focused on eco that…

Other player bases (i dont know the size): Voobly, Gameranger, …

I know about them still existing

Hopefully, DE gets enjoyable enough so HD players will join DE too

I wish management for this project had the mentality that the top priority would be for the game to feel smooth for 99,9%+ of it’s userbase. That scrolling our screens on imperial age was lightning fast with no issues, no input lag, no crashes. Everything else is not as important as game performance and stability for a good experience

so you want some positivity…ok

In the late 2019 I wanted to buy AoE2HD but by my mistake i bought AoE2DE from steam.
Unfortunately my pc didn’t have the specs to run it even in single player mode.

Pc spec
OS Window 7 (!!!)
CPU AMD A6-5400K APU
Graphic AMD Radeon HD 7540D
RAM 8 G
Less than an entry level pc as you can see…the game freeze at the early start of the wallace campaign or it lag in a unplayable way as you can expect…

A few days ago I tried to start AoE2DE (bored mood…i’m not a pc expert and something magic could ever happens…you know…)
surprisingly the game started, and currently with the minimum graphics settings it works perfectly in single player with every map and with any number of units.
I can’t obviously play on line but if it works for my system i think all the issues you are facing are not cpu dependent.
Sooner or later i’ll upgrade my system and i will tell you

A derail and a half but alright
Not even invested in this discussion but this honestly feel like shilling, though I doubt the devs are paying anyone for anything at this point.

I’d call that some happy accident 11

Tho tbf, HD runs fine on SP games, but has weird bugs

Lol, yeahhhh, totally getting paid. Heh. /sarcasm.
Actually, if that were happening, wouldn’t I just email them directly my opinions, suggestions, bug reports, and critiques, rather than post the novels that I do here? The thought of doing a text wall novel someday sounds fun, if it would help you believe me

If we want to discuss derailment, you should have brought up everyone’s posts about text walls, too; rather than single out my post. Does the positive post seem so anomalous among the sea of negativity and issues that it should be shunned?

After newestestestest patch pathing is again broken. Or was it even fixed in the first place, I don’t know. And yes, the game lags in multiplayer even on a 8700k/2080ti/32GB RAM. Don’t get me wrong: I am not bashing on the skills of the current developers. I am fully aware they can’t be omniscient and even though the code is terrible, what I am ranting against is the direction this game is going. If these issues cannot be fixed, making the game open source could alleviate the problem. After all, the community knows best what the issues are, and not some company that owns the game simply because they kind of inherited it. Opening the code to the public is a sure way to keep the game alive. The devs who work 9 to 5 cannot be expected to fix this. Voluntarism is what could help save the game or even rewrite it from scratch. There are already good examples of that. And by voluntarism I don’t mean free. Setting a patreon page of sorts could help those keen on improving the game, I am sure the community (being large enough) could sustain a team of people who can communicate directly and not hide between the veil of corporate hierarchy. When communication between those who play the game and those who take the decisions and then impose them on the devs gets broken (and it inevitably will, because MS has a lot of other more important to the company things to take care of), we get DE.

I hope one day we get a new, true remaster of the game.

There is another “text wall”. Never got why it bothers some of you that much, it isn’t too long. You open any book, you will find longer passages.

Decay? What decay? You mean about the ranking system?

Do you realize that age of empires franchise is one of the few Microsoft IP right? and they are still injecting cash to it.

They didn’t inherit it they created it, so no, they are not making it open sources unless there is a law forcing them to do so.

Even years ago before the HD remaster they explicit refused it, heck they even said they lost the source 11 so no one would ask for it again.

They didn’t inherit it they created it, so no, they are not making it open sources unless there is a law forcing them to do so.

The point of my comment is that the original creators of AoE in their majority possibly no longer work for MS. Ensemble Studios were those who created the first game and they did so BEFORE Microsoft acquired them. Today, they no longer exist as a team. Are the guys who currently work in Microsoft those who did create the game? Most certainly not. So yeah. Inherited. This is corporate copyright bovine crap 101.

Decay? What decay? You mean about the ranking system?

I believe he meant chat delay, not decay. Like, when your messages first get to the smartass MS AI to be “approved”.