Why is there still no unit chart, like in the original game manual?

I located a PDF of the original game manual. It has a very handy chart of all the units and buildings, like this: 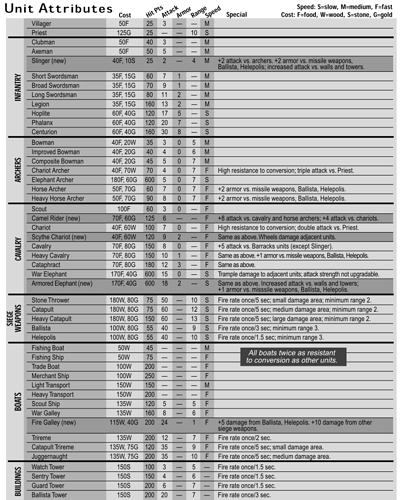 But then the recent update made a bunch of tweaks, with a lot of the numbers now slightly different. Why is it so hard for them to publish another chart like this?? Or at least put those numbers directly into the unit descriptions in the game? Instead they just say something like, “extra damage against infantry”, in the example of the description for cavalry.

I want to know what exactly “extra” means! HOW MUCH EXTRA? Is this really too much to ask for?

Here’s a sheet with units tab with current values:

By grace or disgrace, it’s not possible to get that specific, unless you start your own mathematical analyses, similarly to Spirit of the Law.

By grace or disgrace, it’s not possible to get that specific, unless you start your own mathematical analyses, similarly to Spirit of the Law.

Uh, how so? Isn’t the chart that I uploaded actually that specific? Instead of saying a vague “extra”, it says, for example, “+5 attack vs. Barracks units.” That’s the quantitative info I’m looking for.

The attack stat translates directly to damage, doesn’t it? Minus whatever armor the defending unit has.

I ran the game after several weeks of not doing so, and it is this way, according the Tech Trees:

The AoE Wiki might be of help for a more in-deep analysis on the matter.

I think devs decided to exclude those tiny details so players don’t focus that much on stats and play the game in a more experience-based way (trial and error). Or, they were just lazy not to include them.

I think devs decided to exclude those tiny details so players don’t focus that much on stats and play the game in a more experience-based way (trial and error). Or, they were just lazy not to include them.

That to me seems like a very nonsensical approach, to purposely keep the mechanics of the game hidden. People who find it tedious to look into stats and details can ignore them and learn the game by trial and error–having the info available doesn’t stop anyone from doing that. But people who like to actually read manuals for all the details should have that option, too.

Somewhat off-topic, but this is a pertinent example, I think. The original game had this written in the manual:
Elevation – Provides a 25 percent chance that the attacking unit will cause triple damage on each hit when the target is at a lower elevation.

Is this still true in the Definitive Edition?? What if it is and no one actually knows about it because there’s no manual? If it’s true, wouldn’t this influence battle tactics in certain situations?

The whole point of strategy games is to make players think about strategies and tactics. But those things can’t be evaluated fully if we don’t know the full mechanics of the game.

Elevation is still a thing in the Definitive Editions for both Age 1 and Age 2.

And as for companies not properly supporting their games… yeah, that’s a fact. We should not be complacent and should keep discussing about those things that REALLY matter, those things that make games really special, and that make us return to them, instead of buying games that leave us unsatisfied, unable to refund them, and then leaving them untouched for months and months unless a new update arrives, in hopes that something may have improved.