Why nothing about AoE1?

Why is there no news or iniatives regarding AoE1? Did the developers just dump the game entirely? If that is the case an announcement regarding that would be appreciated. As it stands the game was last updated in July 2020 and has problems that can be fixed and campaign/civilization ideas that can be implemented in it’s vast time frame yet there is nothing. I as well as many players really wanted to see something about AoE1 in the events this year after it was ignored in the yearly recap of 2020 but it seems like we get nothing more than utter silence from the developers…

why does the way it was designed have anything to do with them not making extra content?

Yes, i think It could be a realistic possibility. An AOE5 set in ancient times with new graphic engine, formations etc

DE was designed to work well with the Classic mode and DE mode.

Apparently adding new expansions or new content would mess it up.

That’s what I have heard about it.

So the only way for it to gain more things. The classic mode would have to be removed and be part of a different executable (AOE 1 classic) so DE doesn’t get broken.

Since classic mode was a good idea but never really offered what we all expected, I think that most players would not have any problem with scrapping classic mode for the greater good of new content.

Even though there may be no new content for the game for which to make an announcement at this time, I’m sure the community would appreciate bug fixes at the very least. Microsoft is obviously still making money on the game but none of that has materialized in needed bug fixes, which is very disappointing.

Let’s make sure that the developers do not forget that we still love the Egyptians, the Romans and the Japanese. I bet they will not forget.

To be honest, I like the idea that a future AoE5 would cover ancient times but I do want to say that the fact that AoE4 being in the same time frame as AoE2 not stopping new content coming out for AoE2 means there is no reason to abandon AoE1 for wishful thinking about a game that might never come…

Nowadays people want games to be a little more intuitive like armor and attack upgrades researched at a blacksmith or arsenal, not a storage pit. Also the square hit-boxes prevent units from stacking and efficient pathfinding in large groups.

To be honest, I agree with the square hit boxes being a problem but I think the armor attack upgrades being from storage pit or more specifically I think economy upgrades from market having militarily effects is a cool concept that should be used more.

Microsoft, you know it’s pretty ■■■■■■ of you to pretend like AoE I never existed. 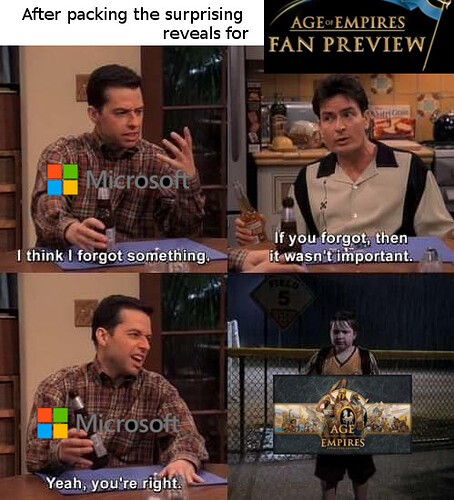 Make AoE1 a AoE2 DLC so it can use all the improvements that AoE2 has over AoE1 and especially with all the polish that AoE2DE got so far.
This would also open the door for new fans because they can access AoE1 within their beloved AoE2.

Scenario creators would have amazing now opportunities for scenarios set in the Late Antiquity or Early Middle Ages.

Just form a technical standpoint, Age 1 was probably not built to expand it much without rewriting large portions of the code, which would not be worth, given it is the least popular title of the series. Even Age2 was not brilliant in that regard (most games aren’t tbh, because they don’t need infinite expandabilty, which also results in extremly complex code whish in turn is hard to maintain), but since it is played by a lot more people, the effort was worth it.

I would love to see new content to Age1, but at this point, I consider it as a test/trial especially for Age2DE.

Honestly from the beginning if they had done the game on AoE2s engine and sold it as a separate game it would have been so much more successful… but even in its current state the game deserve more love in my opinion.

The devs should at least tell us whether they have completely abandoned the game or not just so we can get some closure.

Can anyone make an updated version of this meme reconciling with the new update?

I wouldn’t mind it being scrapped but as a replacement for classic mode. I think a more appropriate replacement would be to ship the original game on steam, GOG, maybe windows 10 store.

For multiplayer, I guess people would use Voobly or Steam, GOG multiplayer server/matchmaking.