Why this unit exists?

you need to sacrifice your economy in the late stage of the game to use it, but they will probably nerf it.

To make Argentina viable, which it does. This is what Revolt units should be, stronger than any Imperial unit, but you get less options.

its a revolt unit! need only 15 minutes to reach!

and revolt or not ! 1 pop doesnt do any sense!

but no really, if they got to fast industrial at 15 minutes you shoul’ve had taken the advantage and attack earlier.

I think the major problem of this unit is the countering. They only have the general cavalry tag, which means the only way to counter them is heavy infantry in melee.

EDIT: Sorry I was wrong on that.

It makes sense once you account for the fact that no other unit will be over Guard upgrade, and you will miss the Imperial Economy upgrades, so you are massively behind both in resources and unit efficiency.

To compensate, you get a super strong unit option, or 2.

The game has a basic principle ! that a unit is usually atleast hard countered by 2 other types of unit!
there are super strong units in the game! not uncounterable units!

They have the Range Cavalry tag, so they are countered by Skirmishers.

They do have a ranged cav tag though! but their 14 grenade range + 50 range resist! counters it well enough! the only effective counter are pikes! but they are slaughtered due to grenades!

Rev units should be stronger than industrial units and they should be special, I don’t see a problem here, they still much weaker than imperial units. 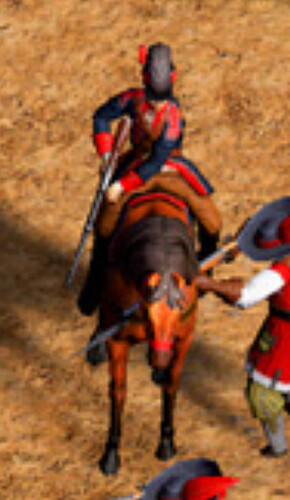 They are pretty weak against high attack cavalry, skirmisher types of unit also do good.

that dude is still a dragoon.

This is not true, Otontins murder Ronin, because they can go back before the Ronin close in.

Highlander with 800+ HP? It will literally always get guaranteed cost.efficiency, because you cannot kill them fast enough, before they take a lot more units than they are normally worth.