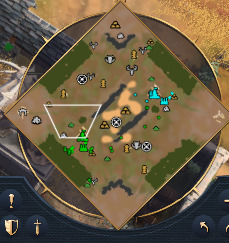 i do wish the maps had more variety wrt terrain, but i will happily play the game even if that never changed.

but what i do think is very annoying, is when there’s such a big difference in res available to one player vs the other

in this example, wrt deer: opponent has 1 patch of 6, and 3 patches of 3. i have 1 patch of 3. its not like they even lost out on boar as compensation. how does it generate such wildly imba spawns? and this isnt the first time. and i realise , that in game opponent wont necessarily get all 4 patches, but it just gives them so much more power over their food eco, even more so if we’re talking something like rus

Yea that must be annoying but tbh I like variety. Megarandom is my favorite because nothing’s guaranteed so you can’t really complain, just gotta deal. Some games should be fated from the beginning just based on the map generation.

The tournament maps are handpicked and you can tell they value symmetry as much as you do. You can pretty much predict where every resource is, it’s practically a mirror.

You can pretty much predict where every resource is, it’s practically a mirror.

Yes that’s exactly what I said I want

Anyway I’m sure the bug will eventually get patched out

Some games should be fated from the beginning just based on the map generation.

The fact that certain civs are better on certain maps every time makes it kind of stale, no? If there was more variation, that prediction would be more difficult, more varieties of matchups would be seen. That introduces a whole new level of skill that they’re just cutting out by making the maps more static. Megarandom would be the epitome of tournament maps because they players would actually have to respond to the map terrain in real time rather than running the entire match through their heads in the lobby. Some people would choose the wrong civs, some maps might favor one player over the other, you never know. Over time, the more skilled players would still sift to the top, only it’s a lot more exciting because each match becomes a new challenge.

Hearthstone is a good example of the balance between luck and skill that I’m hinting at here. You can choose your deck and stack it just the way you want, but some matches it doesn’t even matter how you play your hand, the opponent just happened to have a counter deck. They could have that in AOE if the maps were more random and civ dominance less clear. It basically smooths over the imbalances and highlights skill in the long run.