Would be awesome to add Weather and rotation to buildings?

It was possible since the original AoE 3, I liked it a lot and used very often because it gives you that freedom to customize your buildings view and at least myself is a logic person that like to put the front view of the buildings (mostly attacking buildings) in direction of the approaching enemy roads, for example in AoE 3 I turn around the defensive buildings in direction of the sea. Whatever it is useful or not, those little details adds the game that feeling of dedicated love and freedom to play it.

I do not believe that is a good argument after getting confused so many times with the buildings, they are too difficult to recognize , it was really hard for me to distinguish among barracks and archery, markets and cavalry and so on. So when you see that difficulty to identify buildings you realize they did not even think about that aspect.

I also think that AGE4 would be awesome , with weather effects.The only rts game with this future is Empire Earth 2 , and it looks awesome.

It was an observation between AoE2 and AoE3/AoEO. I dont know if they even maintained this for AoE4.

Sometimes you just want to build your base in a certain way or look at your buildings from a certain angle or play with the unit spawning. It feels important for casuals and competitives alike.

One more thing about rotation - in games like AoE3 it can be ignored completely and nothing bad will happen. There might be even an option to disable this function in 3DE, never looked for that.
Gameplay benefits are not only small but few and far between.
And in IV on map types like Dry Arabia (or however it was called) they might be non-existent to be honest. It’s just an added value for people that want to spend time tinkering with it and for people enjoying roleplaying in solo modes. It’s hardly something that might tip the scales and let any player win a match.

Just think about mission design in campaigns and how much more boring and artificial will settlements look there. Unless it’s enabled for devs, and locked for players.

It’s one thing to enjoy it, even to not see anything wrong with removing this function, it’s completely different to actively argue with people wishing for it to be included going forward. Buildings in AoE III are well designed and personally never had an issue with recognizing any building type that might have been rotated. It’s shocking that players, especially in a place like that, are agitating for stripping the game of depth and features and going back to RTS design principles od mid to late '90s

It’s not a source of any real long-term success in this market. And sorry but I haven’t seen any convincing arguments for its removal.
I don’t think these arguments are made with bad intentions, but I am convinced it will hurt the game in the long run.
It would be a different story if we were in the year 2009, 4 years after AoE III release.

In AoEO, I see building rotation used mostly to position a Storehouse into some meticulously perfect spot to allow the perfect amount of space between Villagers and building to minimize walking distance. It’s for total nerds only but feels so good to have the ability to finetune like that.

There can also be some sticky terrain locations where a building needs to face a different direction to squeeze in.

Can’t agree. It is a miniscule aspect of the game at large. We can only speculate as to why design decisions were made with educated guesses, but of all the possible features that could be criticised, this wouldnt be a relevant one. It’s fluff compared to the meat of the game.

It’s a tertiary level of importance when it comes to game mechanics. That’s why cutting it out makes it worse.
AoE IV is a 3D game. It’s not even like they have to pay artists extra to make new sprites.

It’s something that has barely any learning curve or depth. It’s just rotating models, not a lot to learn except for a single button modifier that allows it, like shift or alt, or the ability to drag mouse after pressing to do this.
There’s more depth in leaving one unit of free space between resource camp and source, so workers gather more efficiently…

Knowing about this feature, or not, does not hinder the gameplay experience for new players. Putting more planning and thought in base layout gives a minimal advantage that is usually felt only on maps with very rough terrain (like being able to cram more buildings into easily defendable area), and small things like that might be important on a pro-level between very skilled players.

Personally I like it primarily because it allows the construction of more interesting, better-looking settlements. We won’t get anything interesting like optional roads system etc. so in the end it’s just visuals and atmosphere. It makes campaigns, scenario creation and skirmishes with AI worse for solo players.
There is no reason for not having it, and I do not care why they decided to not include it - it can be a well-thought-out decision or ‘uhh I don’t know, let’s not focus resources on this I don’t think it’s important’.

How much more boring will cities look with every building type angled the same way. Why go back to the days of StarCraft or Red Alert 2? Are players really that stupid they can’t recognize barracks or guard tower when it’s rotated 90’? It just evokes a feeling of simplicity, causality, cheapness and lack of finesse. 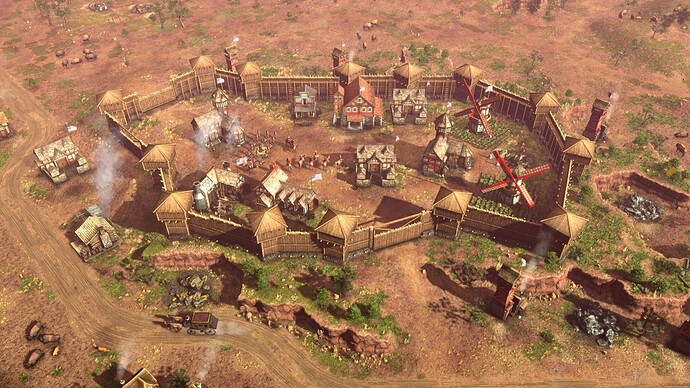 The worst thing is that Devs themselves are not trying to aim higher than their predecessors from couple of decades back. It’s just a recurring feeling of lost opportunities.
I am really tired of playing AoE 2 and 3 for 20+ years, and with IV on the horizon, I don’t have high hopes it will push things forward and replace any of them. Especially with seeing people applauding this turn of events.

Not so long ago even in very simplistic RTS games like The Battle for Middle-earth II it was a normal feature. Why go backward? What benefits from that approach? It just sucks. Goes well with the general design, I’ll give them that. 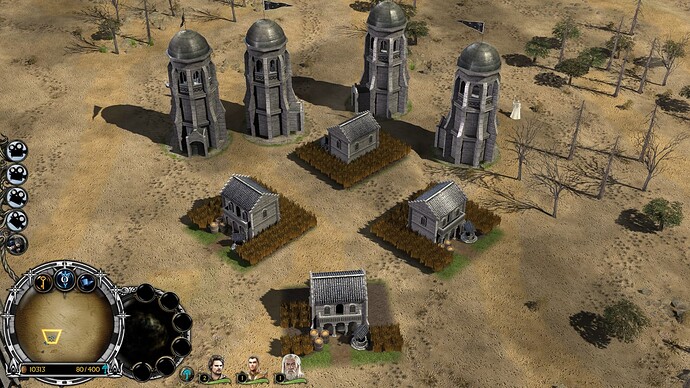 Amazing idea!!!
with the weather, like raining day, fire weapon will get debuff and hard to fire up the building.

If I had to make a guess, they probably implemented the building grid later down the line probably because buildings are easier to manage this way. 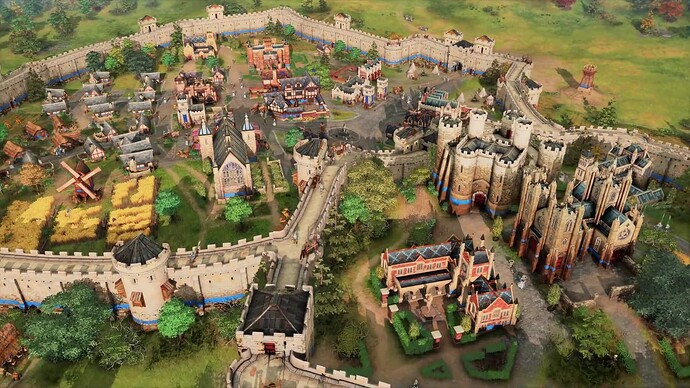 I’ve done a concept about this a while ago. For competitive play, the colors and effects can’t be as realistic. But honestly a lighter version of seasons would be very nice imo.

It was definitely the correct decision. The game’s building mechanics are fantastic in my opinion. (with the exception of walling… that still doesn’t feel quite right)

I don’t really understand why you as a mod have to be in every thread trashing the developers. It feels really unprofessional.

A third option: They didnt feel that it was a helpful or useful feature to be spending development time on.

A fourth option, They didnt really consider it at all, its been in 2/5 games, one of which barely launched before it was shut down. And I dont actually think its a “quality of life” improvement, its a vanity feature with no purpose other than making a prettier town. Maybe nice for some, but not really a priority.

That’s fair, and I’m sure anyone new around here may get the impression I’m a jerk. Since I got here on this forum years ago I’ve tried to always be as honest as I can and give everyone the benefit of the doubt. I still try to do that now, though obviously it’s more difficult since I genuinely don’t really enjoy playing the franchise’s flagship game. I’m not sure how else to truthfully say that I sincerely do not see evidence that the devs considered AoM, AoE3, or AoEO in any measurable way. That’s my completely honest assessment. I suppose I could simply walk away from AoE4 like so many of my friends I’ve played it with in the last couple of years. I’m not here to take away anyone else’s joy.But it’s super important to me that these opinions get raised. I sincerely hope future content will reveal a lot more influence by the games in the franchise I love.

No, it hurts readability.

I don’t see this as a good argument, those who care about readibility simply wont rotate their buildings. I highly doubt high level players will be trying to “hide” their barracks by rotating it 90 degrees

Whereas for those who really enjoy the game more casually, this is a fantastic addition.

In short, no, there is no reason to think it hurt readability at all, and that is a knee-jerk reaction to an perfectly reasonable idea.

I believe based on my own experience playing AoEO for 10 years that readability is a fictional concern that is not seen in any of the other Age games that allow players to rotate buildings. I don’t recall ever seeing one person raise this as an issue in AoEO. I can’t say whether anyone has raised it in AoE3, but even if they have, I submit that AoEO demonstrates it’s more than possible to design a game where building rotation has zero problems.

Let’s use the lessons learned from all Age games to build the best sequel possible.

Furthermore the rotate buildings mode for AoM was able to be used online as it didn’t change the data file, and was very popular!

That’s fair, and I’m sure anyone new around here may get the impression I’m a jerk

I would not say that, just a bad mod. You could say all the same things with a different account and despite disagreeing with most of it I would see no problem with that.

It’s the fact that you are actively participating on a mod account, your comments inherently get more weight, they literally stand out more than everyone else’s because they get highlighted green, and you’re in almost every thread, usually bemoaning the fact the game is not more like AoEO (even at times when that is off topic to the thread in question). It looks, as @Studzman8373 put it, unprofessional.

I sincerely do not see evidence that the devs considered AoM, AoE3, or AoEO in any measurable way.

The camera is like AoE3 rather than AoE2. Wall creation is, too. I’m sure there are other things, as well, but I haven’t played the others in a long while. Although, I’m extremely happy there is no invincible Explorer, no playing cards, no free and continual resource deliveries, no 3rd party factions milling about, and much better audio than AoE3.

The worst thing is that Devs themselves are not trying to aim higher than their predecessors from couple of decades back.

You sure there’s nothing different, new, or better than AoE2, AoE3, AoM? Plus, we haven’t seen much campaign stuff yet, or the rest of the game really at all, and you don’t know what they’ll be doing in post-launch updates. I don’t think this is meant to be a one-and-done. And, don’t worry, there will be more titles in the franchise. After being dormant for so many years, this is the beginning, and they had to start somewhere. AoE2-esque was a safe bet and a nod to most fans.

AoE2 influence will wax and wane across future titles, no doubt… so don’t fret too much. Who cares if AoE4 is a bit of fan service? At least we are getting a new Age game. The alternative is no new game, and possible dormancy forever