The Xolotl Warrior is a copy of the Knight. It has the exact same statistics, just different graphics. So I was surprised to find out that when I converted a Stable the hotkey I needed to press to create one was… my Scout-line hotkey instead of my Knight-line hotkey. I went to the hotkeys menu to rectify this atrocity, but lo and behold, there’s no entry to customize it! 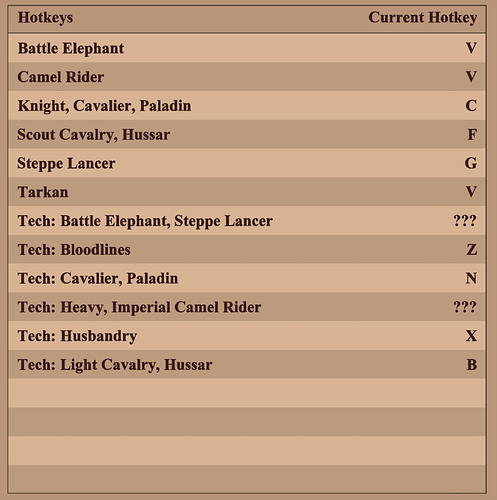 image864×869 59 KB
I’m guessing this hotkey is used because the Xolotl is the only unit in the American Stable and occupies the Scout’s spot in the interface, and that’s the positioning of the grid hotkeys. But I’d like to be able to adjust this hotkey for my very custom set of hotkeys.
10 Likes
casusincorrabil May 7, 2021, 1:56pm #2

That reminds me that in custom campaigns, when the scenario allows you to create a unit at a building it usually can’t be trained from, it shares its hotkey with the first slot. So you can’t use your hotkey if you want to train the special unit.

It is pegged to the Scout Cavalry, Hussar hotkey.

Nice. I will add it to the hotkeys section of my bugs list

Also another request I would like to make is to separate the techs of Elite battle elephant and steppe lancer.

in my personal hotkey setup i like having camels and battle elephants on the same hotkeys generally, but because of the steppe lancer tech being linked to the elite battle elephant tech, I get issues when playing Tatars

Hey everyone, thanks for this report, this issue is now being tracked