There is a succes in the 3rd Mongol campaign where you need to defeat the Jin before they make a wonder, I did that, but didn’t get the achievment.
They resigned before strating the constructiion, but I haven’t received the achievment neither when they resigned, neither at the end of the game.
If anyone has an explanation…

I think all the campaign achievements like this one are bugged atm. Do you have a strategy to kill Kushuluk in 20 minutes?

Yeah I found one, and I got the achievement, you need to send all your army except one unit to the palisades who separate Kushluk’s camp from the one of the Kara Kitai, then with one unit at an another place in the Kara Kitai’s camp attack a unit and flea once the Kara Kitais sent all their army against you, then with the rest of your army destroy the palissade and run towards Kushluk and kill him in a suicide attack. You may need several restarts to find the best way to avoid Kushluk’s units.

I just did it if you still needed help with it here:

I also did it. Thank you anyway! It seems rushing him is the only way.

What was your strategy for killing Jin before wonder construction? Tried a couple of times, but struggling to do any damage before the wonder begins

I haven’t done it on hard, but I think it’s manageable to do it on lower difficulty. I think there are two ways to finish this.

Thanks. I’ll have to give it a try and see if the achievement triggers

Got the Kushluk one, used to do the straight up rush in the original release, and it still works, although seems less reliable.

Barbarossa I defeating the other civs instead of collecting relics did not pop for me. The only thing I could think of was it might mean fully defeating, but that’s really hard to plan at the end before they resign!

I destroyed everyone too and did not get the achievement.

Maybe you can’t collect a single relic…? Because I collected 3.

No, i didn’t get any of relics and had Jing resigned before they ever built the wonder, but still didn’t get it

Mmm I think I took one relic in Barbarossa I. Annoyingly long campaign mission to just try again lol. As is Into China, for sure! That was one of the hardest scenarios back in '99. I clocked up thousands of kills with my castles before securing victory there, and only -just- got the Jin wonder down before it lost me the game. Of course I didn’t really know how to play very well then :).

perhaps you should try attila the hun fifth campaign with hard difficulty and win the game in 30 mins for winning the achievement… It’s even harder and challenging, though i quite like that kind of challenge.

I just came in here to say that I’ve also met the requirements of the ‘I Was in China Before’ achievement but did not receive it. I even went and destroyed all the leftover towers to see if it might trigger it but that didn’t work.

I am somewhat suspicious of the achievement wording however. It’s been known that the Jin faction is scripted to construct their wonder about 40 minutes into the mission, but that you can delay its construction by making them spend their resources on units to fight you off. So what I suspect is that the actual goal of the achievement is to defeat Jin in 40 minutes, not just stop the wonder from beginning construction.

So it’s either a bugged achievement, which I hope is the case, or the wording is misleading.

Issue: I didn’t recieve the achievement “I was in China before” even though I defeated Jin (Yellow) before they started building their Wonder. Had to destroy the 9 Blacksmiths that were in place where Wonder is put when they build it. I even checked the replay and viewed it through Jin in case they put up the wonder’s foundations up (somewhere else than the designated place) and didn’t start building, but they didn’t even do that.

It was my second playthrough through the map. I have failed the first time, but was in such a good position I didn’t want to abandon the game. Are the achievements only valid for the first victory on the map?

Probably not screenshottable, but I do own a replay of this map, so if needed, I can provide that.

Yeah also just failed to get that one on 33164 Microsoft Store version. These ones are a pain because they are long scenarios to replay for the achievements to not work. I would love to hear responses to these issues.

I have that problem too… my guess is that the AI has put down the building BUT did not actually start the construction.

So to get this achievement it
"Defeat the Jin before they start constructing a Wonder in the third Genghis Khan mission “Into China”.

I could swear I did exactly that. I did not use cheats nor was I promped the screen that said so when finishing the stage.

I heard Jin starts building the wonder at minute 40, I defeated them before minute 40 but finished the actual mission after that.

Hello @Matipedia!
I did a fast search on Google and I found this:

Offense Is the Best Defense Defeat all opponents before constructing a Wonder in the sixth Saladin mission "The Lion and the Demon". Defeating all opponents instantly leads to victory screen, can not be completed. I Was in China Before Defeat the Jin...

Thank you for the reports!
We are aware of this issue and are working on a solution for the future updates.

Screenshots:
Original topic with mentions of a few bugged achievements: 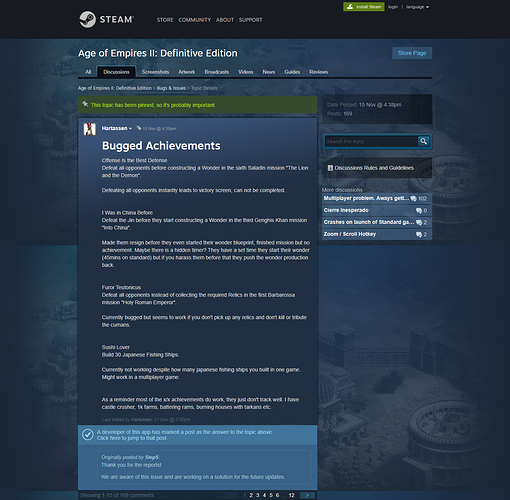 It seems like the achievement you are mentioning is bugged but fortunately: Devs are aware and working on a fix to solve it asap!

I thought of posting on Steam Forums but I guessed this would be the best place to start.

I guess I’ll have to wait to complete those!