A better age of empires balance

TLDR: I made a mod to prove my ideas. Instead of being combatitive, please play a few games with a different flavor of balance, and then come back and critique the ideas

The game in my opinion is a bit boring and bland. First, siege is too strong, leading to swift demises for castles, which in turn makes armies the deciding factor. As a result, a fight is quickly determined by a single battle, as well as harassment.

In terms of units, there is no tradeoffs. There is no reward for making a horseman over say a knight. As a result, archers, horsemen and spearmen are never seen after a certain point in the game. This results in armies of only knights charging around and clashing, because knights are the most pop efficient unit.

I made a mod to fix what I consider the most glaring issues, I called it the rebalanced siege pack. The result of the changes I made is a game mode that lasts much longer. Instead of being easily able to beat the AI in 20-30 minutes, I had a grueling match with several AIs on the hardest difficulty that lasted… 4 hours.

Before giving feedback on these ideas, please try them in game for yourself. The resulting game is a real challenge. What happens in this setup is that the forests are very quickly cleared, forcing people to send villagers out to get the last of the wood. Wood shortages naturally prevent abuse of siege engines, and since many trash units (archer, spearman, horseman) no longer have wood costs (but extra food costs) armies of low tier units naturally come to dominate the battlefield. Gold shortages also have a marjor effect, resulting in the deployment of extremely high tier units being drastically reduced. As a result, a company of knights is now an important and dangerous foe, instead of just another day.

In addition, lower tier units regen, while the higher tier units do not. This means that high tier units need clerics to support them, while low tier units can simply sit and regen. Low tier units are also not able to really do damage to castles, which forces people to either heavily invest in seige machines (which is actually very costly) or, they can go around the castles. The result with this is a battlefield that is much more static, (and fun) and there is an actual moment where opponents crack under the stress, instead of being just raided into oblivion.

You clearly don’t understand what makes for an entertaining game from a competitive aspect , or what viewers want to see from streamers.

What is with all the regens? Just increase unit HP, making everything regen is a bit stupid. I agree with @PlumpDucklin, people want to see action, not wait hours for the game to end because everything heals and defenses can’t be killed.

Honestly this all sounds pretty terrible. It sounds much more boring and bland than how things work now.

It’s also kind of all over the place. You say you dislike raiding deciding games, but want to lower villager health and make them more expensive to replace?

Cool if you have a group that likes this in custom games, but that’s where changes like this will stay.

There are ppl like you who prefer that slow methodological gameplay. Given the mod community you will find your niche of ppl.

I don’t think this pace and rigidity would bode well with higher levels of play though?

For example if a keep cost only 800 stone and only takes the same amount of time to build as live patch but gets 35000hp? Keeps drops becomes THE only way to play the game whereby you rush to get your keep up first somewhere crucial and choke your enemy resources to death… actually this wouldn’t lead to longer games at all?

Dude, have you played it? You cant raid through stone walls xD

What you can request is more options in the advanced settings mod. Something that it does not have is the option to limit the number of villagers, something that I would like to try to corroborate some of my hypotheses

Advanced Game Settings got big update, maybe not that big in terms of features, but everything was completely rewritten to work better with diplomacy

[image] Any feedback and bugs can be reported at gith…

Coh3 is a game also made by Relic, they will provide an editor where you can customize game modes and features. If you request this, the developers will rank your request according to the order of priorities 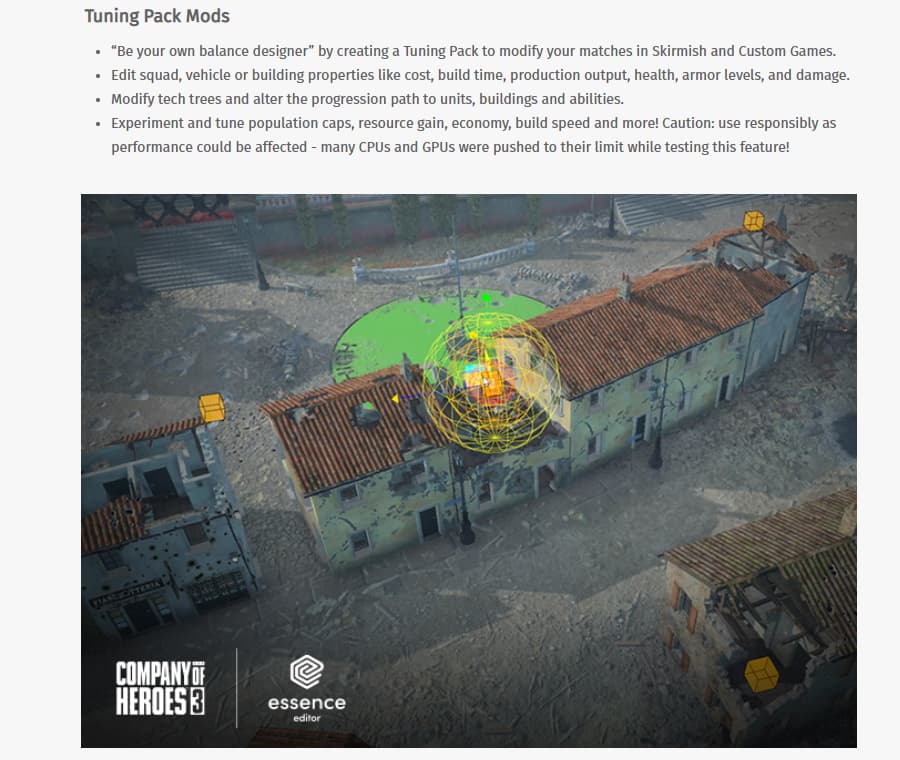 We’re making Company of Heroes history! The Company of Heroes 3 Essence Editor and modding will be supported day 1. That means when the game launches, it will come with the latest that our brand-new Essence Engine 5 has to offer, and new capabilities...

Hey those settings look really really cool! Can you point out where they are? I would like to be able to play with your mod, as well as my economic changes. Lowering the available gold and the available wood really changes the way the game is played. Ty for your consideration!