5 Likes
Another post about arrows
Whitout projectle travel distance and speed that leads to accuracy, this game cannot be a truly competitive one
TheConqueror753 September 22, 2021, 7:04am #2

Look at that, 80% think micro is good. Just ignore the 5 voters at the time I post this part. Clearly we need micro!

Jokes aside, I do think that we need micro, and at the very least, projectiles shouldn’t turn in midair to hit their targets. Just up the projectile speed if they want it to be harder to dodge, but then also make it able to miss at high range, to make archers good against large groups of enemies.

This is what they should do:
Arrows have movement speed increased, but can no longer turn in midair. This makes micro dodging an occasional possibility, while removing the ridiculously unrealistic midair turning projectiles. If needed projectile speed for arrows could be anything up to doubled. Arrows have a chance to miss, maybe 60% chance of hitting the target at maximum range. Certain techs can improve this. This basically makes archers similar at close range, but against long distance groups they provide an area of effect attack, and can be highly effect without being focus fired.

please spread the word and lets us bring back this feature, this is a pivotal feature, in most competitive games these type of moments spark excitement and skill play. Maybe share the poll?

The way these 2 answers are written is flawed.
Please correct the second one and delete the word “lasers” in it.
This is confusing people and makes them vote for option 1.

This poll will not show the opinion of the players in its current state.

Although dodging arrows has been a mechanic popularized by Aoe 2, I will say it isn’t all that necessary for gameplay here.

As we can see in starcraft units have a 100% accuracy and that has never taken away from the gameplay/micro.

Micro just moves from dodging ranged projectiles to positioning your units properly and focusing key targets as well as having a proper mass.

We can see some lovely micro in the Dev showmatch where the Rus player dodges mangonel attacks.

SC 2 happens in a futuristic setting with homing missiles, we are talking about 16th century human armies. In SC2 terrans are not even earthborn humans anymore, as they left that planet ages ago.

Dodging arrows is a simple mechanic, it beings some tense and intense moments in the games.

my argument is less about setting and more about gameplay.
What im saying is Starcraft is renowned for its micro and yet they have 100% accuracy on ranged units.
Not having arrow dodging doesn’t really take that much away from RTS gameplay.

Maybe a solution could be that the archers, etc. had 100% or very high accuracy, and then, that the melee soldiers were able to enter in a position where they can have a chance to dodge, but maybe move slower (like covering with shields for example), I dont know, could be a in-between solution of both opinions, what do you guys think?

Or else, as an other forum user said, just make the units able to dodge, but make it harder (faster projectiles) so that it is not always worth it to play with this micro strat.

Sounds like aoe3.
Pikes could go into a defensive formation, taking reduced damage from arrows but moved more slowly.

This might not be related to tankiness against ranged, however if you look at the patch notes you can see there is some sort of defensive stance spear units seem to take that does extra dmg to charging cavalry. 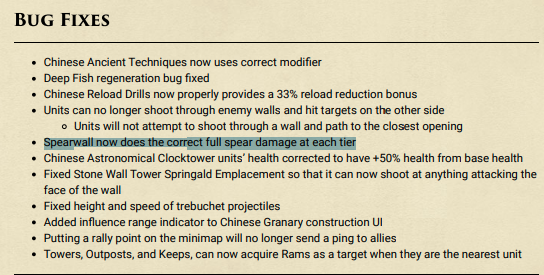 people want to dodge enemy arrows, but have their own units’ arrows hit the target. they will never be satisfied

if you want to simulate a medieval battle, then have the archers fire tons of arrows in a spread (this happens naturally because of wind / inaccuracy), make most of them miss, and have a few of them hit

but you can’t do that when the armies are abstracted to single-units. so the way to simulate it is to fire one arrow that hits, but multiply the damage of an arrow (pretty high) by the hit rate (pretty low)… and that’s precisely what 100% accuracy arrows are

Oh okay then, forget my first statement, the second thing i said maybe would be a good in-between position too (to make micro dodging able, but harder than AoE 2). So that only real professionals or people that really want to max. out their own skill would risk on taking the time and effort to dodge.

Could also be a good solution my friend, I see it as a fair spot.

That’s what I would want. To me, a group of archers firing at long range should function like a nest of bees.

This isn’t Aoe2 and it shouldn’t be. We have enough successful RTS like Starcraft so we know we don’t need these arrow missing. You can have proper micro without arrows missing all the time.

If you want your arrows to miss, go back to playing Aoe2. I will enjoy Aoe4 and all the other RTS and I don’t need arrows missing.

I would say that horses should be able to dodge crossbow bolts and archer arrows by reducing the accuracy of them when the horses are moving to maybe 50%.

I am all for some random miss percentage on arrows but no manual dodging. I mean why not manually dodge melee attacks also? Its actually easier in real life situation.

randomness bring luck factor, better not have that and allow players to dodge by themselves, if they are skilled enough.