A proposed overhaul to Paper Money

I don’t think I need to convince anyone that Paper Money is an underwhelming UT, with short term effects and benefiting more to the allies than the player themself (which makes it basically useless on 1v1). I’d like to make a suggestion to turn it into an alternate Burghundian Vineyards with which allows lumberjacks to slowly generate gold while working. It may seem broken, but considering Burghundian Vineyards isn’t enough to make the Burghundians op and the Vietnamese are already in the top5 worst civs in 1v1 AND team games, I think it should be a reasonable change.

How do you see Vietnamese as a top 5 worst civs? Team Games i could agree with. but 1v1? not even close. 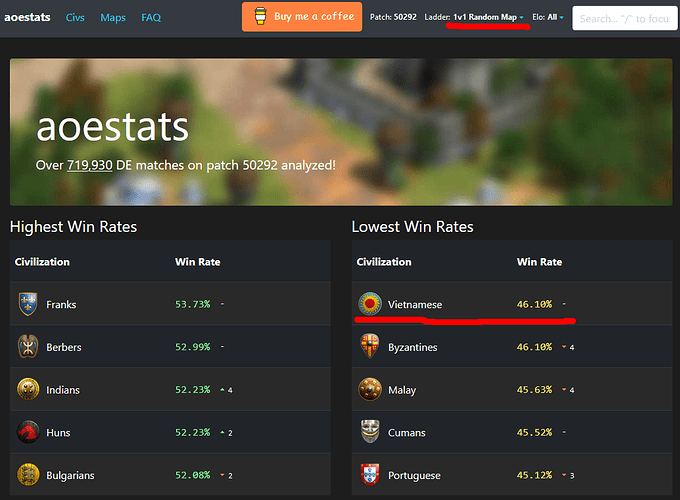 Maybe it’s outdated datas, I don’t know if matchs from the previous patchs are still taken into account.

the data hasn’t been updated in over 2 months.

oh it definitely needs fixing, i agree there. just disagree about them being so bad.

I used to dislike paper money… to the point I suggested to replace it for something else over and over again. Be it economic or military. But after it saved me consistently a couple of times, I started to consider it more like an emergency button. The tech is fine as it is. The only thing I’d change about it is the amount of gold and also give it a permanent effect. Something like archery range units gaining more LoS. That can be used for offense and defense. Or archery range units moving faster, or giving them one mild effect like a niche attack bonus, etc. I don’t know.
About your suggestion, Burgundian bonus is like 43 farms = 1 relic. Paper money is an imperial tech. Giving them that kind of effect is going to be too late for the vietnamese in imperial. A bonus like that needs time to add up, so it should be a castle age tech or a civ bonus for a new civ. Then again, I suggest leaving paper money as it is, but implementing a permanent military effect to complement the tech.

There’s still the possibility of switching Imperial and Castle Age UT, and the gold generation doesn’t necessarily need to be on par with that of Burgundian Vineyards.
As for keeping the current Paper Money effect AND adding an unrelated permanent buff, I don’t think it would be a good idea… It would be like giving them a free tech when the first one is researched.

I that case, just don’t touch paper money. Other than increasing the gold to 550 or 600.

The vietnamese are an anti-archer civ. Their elephants with more hp are great as meatshields and help them push during castle age. Switching that to imperial doesn’t sound too appealing. On the other hand, compared to burgundians, increasing the gold rate will be hard to balance considering they can create units faster right away in imperial age.
In fact viets are nice to use as an offensive force in castle and imperial age. The only buff they need is an extra defensive option in castle age. Like free fortified walls (lol) or something. I don’t know.

The only two issues that I have run into with playing the Vietnamese in team games is that they have fragile buildings (Ouch when it’s a 3v1 push), and that they really do not perform well against SOs. I guess you could argue that the fact that they do not have the last attack upgrade for their elephants is problematic, when they go that route.

the data hasn’t been updated in over 2 months.

And I think they are even a bit worse in lower elo as they have that tendency to get better with elo. But I don’t have stats for it unfortunately.

Why this is the case? I don’t really know. There are some aspects like it is an anti-archer civ and at lower elos people tend to play more cav civs. Also Viatnemese have several uncommon tools that makes them versatile but in a very unique way. I tried to figure this out for months but haven’t really found “the answer” yet.

What I currently see is that Vietnamese have a strong early and lategame but their midgame lacks a bit.
My conclusion: Make Paper Money a cheap castle age tech and chatras the imp tech. That would make much more sense as chatras is indeed more a lategame tech. This way Viets would get a small buff to their midgame, especially for TGs were they need a small buff as it looks.
This could possibly make them a very strong civ on high elo, but only as long as this heavy archer meta persists. And I am actually hoping that devs at some point will do something there. Once high elo games become less dominated by archers Vietnamese most likely will fall off a bit.

I know a lot of people don’t like this “one time use” effect. But in case of vietnamese it actually could be utilized for good without destroying the civs identity.

Yes, this would be a great change. And it could easily balanced by adjusting the gold trickle rate if it ends up too weak or too strong.

I think it will be balanced. Unlike Burgandians, Vietnamese doesn’t have access to GSM.

My conclusion: Make Paper Money a cheap castle age tech and chatras the imp tech. That would make much more sense as chatras is indeed more a lategame tech. This way Viets would get a small buff to their midgame, especially for TGs were they need a small buff as it looks.

Chatras being +100 HP is already look like an Imperial tech. Also +500 gold in castle looks fine as you still need to build the castle. I think this can also be okay.

Lastly I want to see faster range for a civ (other than Britons of course) - be it Vietnamese or Ethiopians or a new civ. Archer is an unit that you would want to mass from feudal. Losing them in imperial is actually a big lose as even in TG, you will get barely anytime to replace them. And for 1v1, you should think about switching to infantry or maybe even trash battle once you lose the archer mass. So I think a 30% - 40% faster after an Imperial UT won’t be a big deal as Britons have 20% from feudal and that’s even a TB, helping the other flank a lot.

this is the best idea for paper money i have ever heard. burgundian vineyards for trees is such a great idea and realy fits with the theme of turning paper/wood into money.

Yeah, it was my reasoning. I also thought it would be too powerful to be a free bonus from the start of the game, contrary to the Poles turning stone into gold, but as an UT I think it can be easily balanced.