Was advised to repost this suggestion here for Age of Empires IV, so here goes.

Anyway, I was wondering, will there ever be an option or feature in the future, where you can easily see a tower’s range (specially firing towers) in-game? Similar to say in StarCraft, where if you click a defensive turret, you can see visually a radius of its range and see if you have any parts of your defensive structure that won’t be covered by your tower’s defense? I think its a nice feature to add in the future.

Thank you for your time and looking forward to playing the game soon!

Personally I think it would be a good idea since Age IV looks a lot less grid based than previous entries. Sure if you know what the tiles look like it can be easier to count say, 7 tiles or so. But without tiling ranges may come across as more ambiguous and I think visual indicators would be a good idea.

Thanks for the suggestion BTW man to post it here!

I’m not very familiar with Starcraft, should you also be able to see the ranges of your enemies fortifications or just yours?
Maybe for such a feature I would also like an option to host a game with those indications on or off. Or have them automatically disabled for ranked matchmaking.

Personally, I’d prefer the tower range etc to be off, simply since a commander in that era wouldnt have access to laser sights, digital Grid management, rapid calculatives in the midst of warfare etc.
It feels like a feature from the wrong timeline.
Whilst: Eye-measurement and experience seems like the tool for this era.

The feature works, when you click your own towers, and you can easily see all of the effective range radius of your towers. No it doesn’t work with enemy towers, just your own.

As much as I would like to agree with this, keeping in-line with the feel of the era, Definitive Edition DOES have a digital map grid feature soooo…

My concerns were more gameplay-wise, like, I wouldn’t want the combat to end up revolving too much around the radiuses of the towers.
But the thought of it also brought to me images of modern or futuristic games, like how you were placing anti-air defenses on Supreme Commander while trying to have your whole base covered against enemy bombers.

The ability to see tower range happens in one’s mind after you play the game a bunch, and you get a general feel as to what’s too close and what’s a safe range. Having a HUD graphic to say exactly doesn’t sound fun or advisable for AoE, imo. Why stop there, why not see the firing radius of archers, ships, trebs, catapults, castles, etc? It becomes too much paying attention to a HUD overlay and not enough to the actual game landscape and items within it. Kind of like how I pay way too much attention to the mini-map and icons in Rockstar games rather than watching the actual road I’m driving, riding, or walking on.

Well, I can certainly see some kind of radius in this screenshot, as well as a red arrow pointing towards the center (or not) of the circle.

I dont like it either. Latest Total War titles have all these circles and arrows showing the range of everything and where they are going, and this is why I stopped playing them. The game is gone with all its immersion, it’s just paying attention to an overcrowded annoying HUD.

I hear ya. Sounds like they should call it, “Total War: Battle of the HUDs”.

If AoEIV does it, “Age of Empires IV: GUI Dynasties”

Well, I can certainly see some kind of radius in this screenshot

tbh it’s very hard to see what’s going on in that image, but I still tried my best in trying to enhance it. 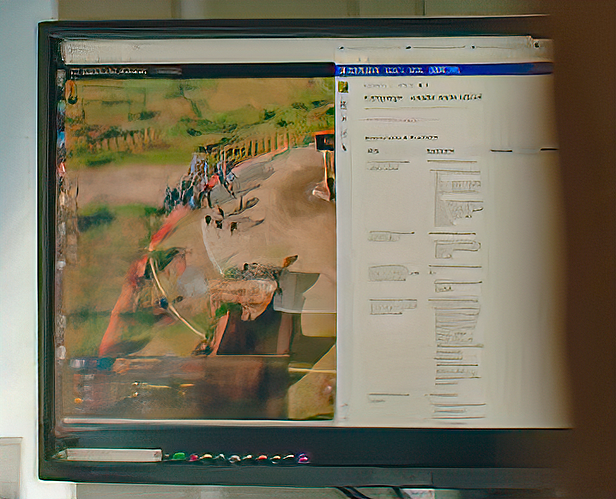 Same goes with this image. But it’s the best map image we have as far I know. You can see the fog of war at least.

ah, another cool editing of yours.
Yes, it is clear now I think that it is some sort of radius, and the yellow line another, larger one?

Could be tons of things, something that comes on my mind, except from tower ranges, is a potential feature that was mentioned during an interview, that flying debris from buildings could hit and kill units.

For all we know, this screen could be testing such a feature, like, the range within those debris could fly.

The radius might be a visual element for a player to help gameplay or it also can be an element for only a game designer that they are adjusting to make the game balanced. Because this is a screen from their editor it’s very hard to say.

Uh oh, they’re using a Chrome browser as seen in that 2nd screenshot! Not Microsoft Edge?

Also, how do you enhance these so well? Are you using deep learning AI or something

I dont see a red arrow…

sure, since this is controversial there could be options

At least have the range be shown only when the tower is selected, not all the time