Add 'most used military unit' result for each player in post-game stats, just like in AoE III

Although the following is admittedly a “niche” request, it’s nonetheless really cool in my opinion.

In AoE III there’s in the post-game stats the mention of which military unit was used most often by each player (with the exact number). Why not also have it in AoE II? Wouldn’t it be cool to know how many paladins a pocket player has spammed in a 4v4 TG? Or to give a number on how many huskarls were precisely included in the Goth flood?

(I suppose, though, that most often the most used military units will be trash units, regardless of the settings and civilizations 11).

While I’m at it, I’ve got a question. While I was lately testing some things out in the scenario editor (cf. The scenario editor has big problems with the tech tree, especially when “all techs” are enabled), I noticed that hero trebs get +2 atk from chemistry. Does anyone know why that is? :-/

Not sure if it’s a troll post of yours, but if you kill an enemy AI fast enough, it will be his explorer (max. = min).

Disappointing how weak AoE III’s AI still is. But then, one can also abuse AoE II’s AI. If one harasses an extreme AI at once in DM with the starting scout, he’s systematically going to garrison his vills in the TC and try to shoot the scout. If he wasn’t able to finish a military production building before ringing the bell, you just need to dodge the arrows long enough until reinforcements come and you win.

It’s not a troll. AoM’s scoreboard has enough room to display your fav soldier and your fav myth unit, so why AoE2 couldn’t have most used and least used military unit?

Even better would be to see current/built/killed/lost statistics for all unit types, like in Civilization IV. 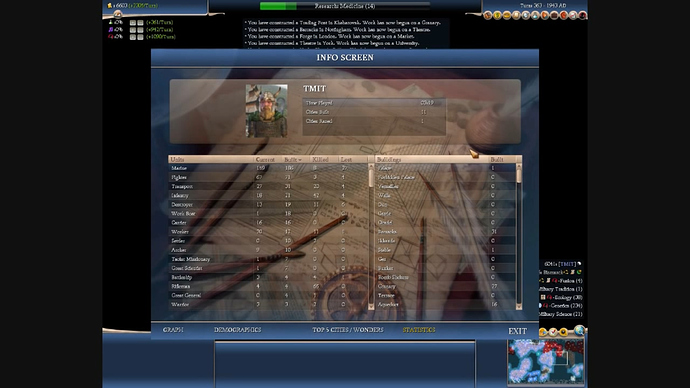