The scenario editor has big problems with the tech tree, especially when “all techs” are enabled

The scenario editor has some tech tree problems on RM settings and the « all techs » option in the scenario editor doesn’t work well at all. Through this way (“all techs”, scenario editor) one can have without mods the full tech tree while keeping the civilization unique bonuses and technologies. This mounts up to funny and enjoyable results (cf. SotL’s 212 HP Frank paladin w. bloodlines, https://youtu.be/3_CzhgFSxmY?t=380). Or a Hun stable with the usual hussar, paladin and tarkan choice, as well as now heavy camel, elite battle elephant and elite steppe lancer.

However, some bonuses do get lost (especially team bonuses!), upgrades get stuck and some units and upgrades are completely missing.

I haven’t checked each bonus for each civ., but there are already some very odd things:

The following problems are even worse, considering they happen in any scenario editor started game, with or without “all techs” enabled (!):

Here are some examples. The first picture depicts a Goth barrack with simultaneously the eagle warrior and huskarl, but there isn’t the condottiero, who should have been there too, as the Goths were allied to the Italians.

The second picture shows a stable with the maximum of buttons and even though there even then still is one slot left for the elite steppe lancer upgrade, it is rather blocked behind the elite battle elephant upgrade. 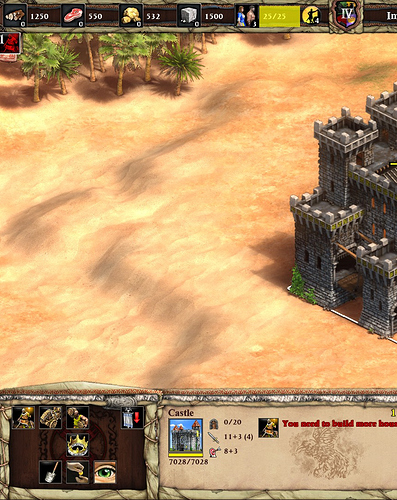 Not directly related to the topic, but to All Techs setting: shouldn’t a custom game or a multiplayer game with All Techs option give all civs all units, without limitations?

I tried such option and I didn’t get all units with the civ I chose.

Not sure if it qualifies as a bug, but it certainly is annoying and it would be quite nice if it could be changed back to as it was in AoC (as far as I can remember): if in the scenario editor some civ is given a unit with an upgrade it doesn’t have in its tech tree, it shouldn’t get downgraded to fit the civs’ tech tree as soon as the scenario is tested…

In campaigns AI-controlled civs. regularly have upgrades they shouldn’t have. For instance Teutonic siege rams in G. Khan’s fifth mission. It would be nice if the scenario editor could (again) permit this too without using triggers.

(I just thought about it, as I was redoing G. Khan’s 5th campaign mission, inspired by T-West’s achievement, cf. https://youtu.be/qrCdUCJjp_o?t=1051, and improving it to 17min55, hard difficulty, 2,0 speed; there’s potential for still a bit faster by managing to get more vills past the red castle and keep).

Quick reminder that there has been no change. Huns still need houses in “all techs” scen. ed., etc. etc. It’s still one big mess.

As a new example, this is a Berber “all techs” archery range in the scenario editor: