Advice: Some of the mod buildings can be officialized as scenario-editor items

It will be great if these ancient wonders (from the RAB mod) can be officialized and used in scenario editor. Will the FE try to realize this? It’s ok to let it be true in new DLCs.

Can even make some competition for modders to make certain buildings and select the best ones as official scenario editor items. 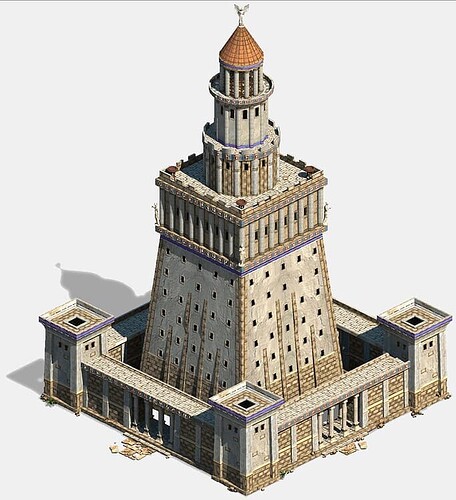 Rome at War (RAW) was a mod published by Wild Fire Studios/Games (WFG) during the days of Age of Kings. WFG :: Rome at War (wildfiregames.com) The work done by Wijitmaker and others was amazing for its time, it captured my imagination and sparked my interest in Modding and Roman History. That interest was rekindled with the release of AOE 2 DE, and accelerated by the work done by others who wanted to port AOE to AOE 2 DE engine. WFG went on to start development of 0 AD (a free open source game…

Just wondering, any reason you linked my post? I’m just the balance and scenario dev (As well as some other stuff), other than directing which buildings we need, I don’t actually have any control over the art stuff. Interesting idea though.

Wait, bug report? What? This should be filed under the modding section of the forums.

Maybe the devs read this section more frequently than the others.

Sorry, I mean the whole RAB.

They do, but that doesn’t make it a bug.

OK. So probably they will move this to another section.

You should be able to change it.
Edit: I see you have.

Hope that the devs can see this.

Why should a game based in the medieval era have ancient buildings? This suggestion makes 0 sense.

These ancient buildings existed in the medieval period，didn’t they?
Just like the pyramids and the Sanchi, which you can find in the scenario editor.

These ancient buildings existed in the medieval period，didn’t they?

No, just google and see.
There are way better things that can be added as scenario editor which will have more use.Eg. vatican buildings.

i dont mind the ancient buildings, it is definitely nice to have more medieval building first

The Lighthouse of Alexandria still existed for most of the AoE2 time period, although it was gradually destroyed by earthquakes.

Stonehenge definitely existed during the medieval period, since it still exists today.