I dont think playing only one map should be something for ranked but instead for unranked.

You ranked elo should show how good of a Player you are, and if you are a one Trick Pony then you should be punished for this by losing on other Maps.

After all Ranked is the competetive Game mode that is designed to show the skill of each Player, which is why any Competetive RTS Game has a Map Pool. The Map Pool forces the Player to be adaptable and be skilled over all, not just at one specific thing. I also could have a higher Elo if i only play Hideout and islands, but this would be fake elo then.

In the same way I knew people who only played one map, dodged all others and pushed their elo this way, despite being worse then their shown elo.

Its not a problem, its more a design question:
What do you want Ranked to be?

Should it be a mode that is designed to show the skill of a player, or only a matchmaking system to find fast evenly balanced Matches.
I think most players would want Ranked to be a competetive mode that mirrors the Skill of the Player, which means you have to play different maps. (Tbh i already disliked that they added the function to favour maps because it makes it possible to nearly only play Arabia or Arena)

But I agree that there is a Playerbase that doesnt want to play multiply Maps and still want a fast Matchmaking system to Play this map.

My suggestion: Edit quick play:
Give quick play a different hidden elo (a hidden elo basicly works like ranked that isnt showen but used for match making) and then the option of infinity Bans.
Ofc the more Bans a Player uses the longer he has to wait for a Game (because the system needs to find Players of similar hidden elo that didnt ban this one single Map), but its the decision of the Player to take. If one wants to wait longer for the specific map they should be able to in quick play.
This way Player could only play the map they want with a matchmaking system without making Ranked less competetive.

But as you have seen in my Post above i also think Players have different Playstyles and strengths which is why the Ranked map pool should be diverse with maps of different styles, and not as one sided as it often is nowadays with mainly open maps in it.

Dropping the ball on the ALT-F4 solution as it only rewards Arabia-style/design maps players. Let ranked players play the maps they want to play. Even if they have to wait.

Please take in account the ranked players who have been playing this game for 20 years. It’s really simple: Let ranked players play the maps they want to play.

Balance is never solely decided by a single unit

I agree. I work 8-12 hours a day and sometimes I want to play a game or two after work. I’m not going to play a map I don’t enjoy or that I don’t want to play at that moment. All this is doing is pushing me away from a game I’ve loved for 20 years.

There’s a hotfix today for Steam, but not for MS Store. And there’s no announcement for the hotfix.

When will it be available for MS Store?

Following yesterday’s Age of Empires II:DE Update 54480, the Team has been monitoring feedback and working to address issues identified by Community. We’re delivering some quick fixes available in Update 54684!

We’ll continue to keep an eye on player feedback, particularly around the new Co-Op Campaign content that was released in Update 54480 – we’re anxious to take that feedback into the Campaigns still to come and do what we can to make some very memorable Missions playable for you again, but with a friend!

When will it be available for MS Store users?

Update 54684 is only available to Steam users currently.

Totally agree.
That is exactly the reason why Hera will not become Number One unless he improves his skill on maps other than Arena/Arabia.

For those who appeal to “playing it for 20 years”: the game is evolving and the tactics evolve with it if you cant keep up and adapt to the changes then you cant call yourself a pro anymore, youre an ex-pro, an ex-ranked player. Go to unranked lobby if youre only good at arabia. I remember when players wolrdwide competed in a game called “Age of Huns on Arabia” for several years. And i’m glad we`re back to competing in “Age of Empires II” , with hood rebalancing after each update.

To the devs: there will always be people who like the updated stuff and those who don`t, but those who do - rarely bother to post a “thank you” comment. That does not mean they are a minority. Thank you devs, keep doing great job and keeping the game alive and competitive.
Oh, And please fix the bug with non-standart characters in user-name (documents folder path) soon. Players from Japan, China, Korea, Russia, Brazil, Colombia and pretty much the rest of non-English alphabet world are waiting.

For any Microsoft Store users that can’t get the latest patch, this gets it working: Oct 6 release for Steam, but not MS Store - #3 by SavvyEmpire

I disagree, although I think a better solution is to have an elo for each map. Yes, that’s a bit janky but if the ladder is intended to be the best way to match up with someone of your skill level…then don’t force people to play maps that they have very low skill level at, especially when they don’t want to play that map. Fake ELO? Okay, so if a person gg’s at the start of every map they don’t want to play instead of ALT+F4’ing, isn’t that also fake ELO? The simple truth is that everyone has a different skill level on different maps, so they should have a rating for each map they play. Furthermore, people shouldn’t be forced to play something they don’t want, especially when we are trying to play this game for fun.

Thx man. However, yet again, no mention in the game release notes section. Not even a separate post in this section? Just a random comment in a thread dedicated to a different patch? This is really confusing.

Same for me, I played yesterday, no problem, now today opened to continue and cannot access multi-player. This has happened in the past, and must wait for next update and hope it is cured. I play both single & multi-player games & don’t really like to be forced to play only single player games just because an upgrade fails. I know we are not the only ones w/this problem, how does it get fixed permentely?

I’m almost certain this is how quick play works already

Dear admin team of microsof aoe game. I deagree with elephant war bonus. They get bonus to much for stable , but thing they neeed are decrease frame delay shoot for rattan and reduce creat cót. And maybe small bonuss for economic. Viet dont need stable cause they are archer civil and they are lack balance for archer before other archer special plim archer. Please ưithhold your deccision. Some one said Viet dont need elephant war bonuss and I agrree with this idea

I can’t play against the AI. 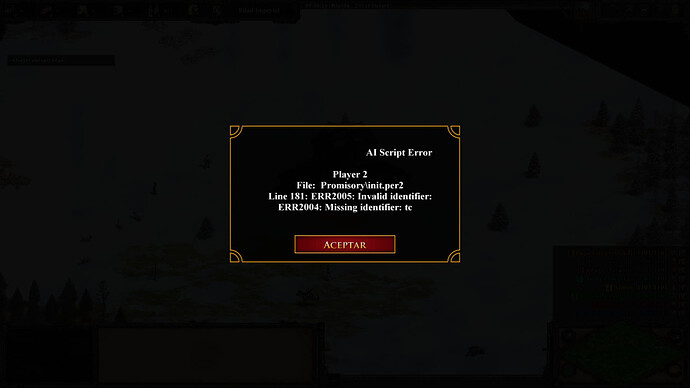 Verify the Steam files if you are using the steam version. Seems like corrupted file to me.

Is it absurd to propose +5% accuracy for Shatagni tech? Indian hand cannoneers have +1 range but a little accuracy wouldnt make them underwhelmed and 10% would be a bit too much.
I think this bonus would help justify researching it

Tired of issue like during multiplayer game just stop, I have checked all settings got normal computer, good connection, good test of stability, but sometimes it just stops and all I can do it is leave. Reconnection and playing without mods don’t help.

lost a lot of ranked points because of that.