AI disabled during Chinese Campaign A Rescue in the Wilderness

The AI moves the captured villagers to the first base during the opening cutscene, after this the AI stops doing anything. They don’t move the villagers, they don’t launch attacks, nothing. This makes the mission trivial to complete.

The AI is supposed to keep moving the captured villagers through base to base, making it a race against time trying to rescue them in time. 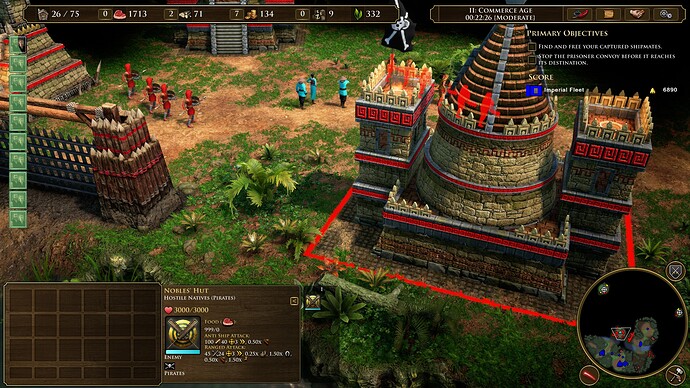 I keep finding issues with this mission.

Fleet Explosives, the 20 damage grenade Captain Huang can throw with the tooltip “only damages trees” also deals damage to War Huts (20 damage), walls (24 damage) and presumably other structures. Tested it on a Jaguar Warrior as well, and it too takes 20 damage.

The second town center I built popped up the “The Emperor has honored you with a grant of provisions from the Imperial City” message and I got a bunch of crates.

This issue is being tracked. Thanks for the report!