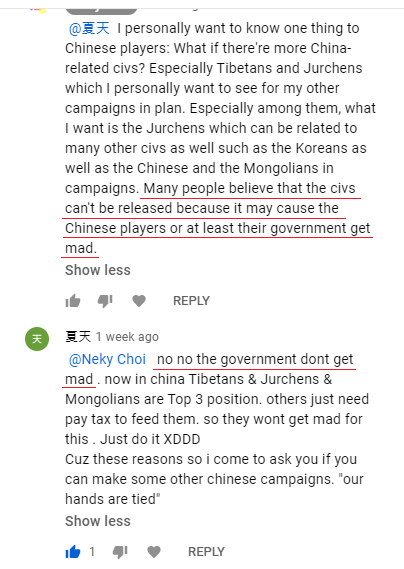 It’s widely believed (at least here among South Korean players) that the Chinese government won’t allow the devs to release the Tibetans and the Jurchens, because of their “One China” policy that doesn’t allow any subgroups of the “Chinese” to be separated.

But, although it’s just one comment of a Chinese player, I found it may not be fully true.

Then, if there were to be another DLC, would the two Asian civs be able to be made? Especially the Tibetans were considered several times, as far as I know.

I can’t even understand what he is trying to say…

The last three lines of his comment aren’t related to the former part.

So then he just says the government won’t be mad because they give privileges to Tibetans or something? Seems pretty misguided to me.

This is anecdotal evidence. The sample is just one person.

The same way that the premise of this post lies in just a guess about the devs views rather than concrete evidence.

Generally, I would be in favor of Jurchen, Tibetans and Thai as part of an East Asian DLC.

Also a Southern Asian DLC which would include Bengals, Dravidians, Afghans and maybe Pratiharas.

Why do you think the problem is “One China” policy?

Personally I think Tibet Empire is not suitable to be AoE 2 civilization. It’s Early Middle Ages state existed for only two centuries. We know almost nothing about this state except the territory it controlled. I don’t like the idea to fantasize about what this state was and build AoE 2 civilization around these fictions.
As for Jurchen, I see no reason to separate them from medieval China. Small feud existed for only a century. There were hundreds (even thousands) feuds in Middle Ages. You cherry-pick one of them and call to make a civilization from it. Feels utterly incorrect.

I’m not sure what he meant by “top 3 positions” though.

You made me laugh! You seem to know nothing about history.

Well since right after writing that he adds that everyone else pay taxes to feed them, I’m pretty sure of what he means by “top 3”, and that it’s quite false.

As for Jurchen, I see no reason to separate them from medieval China. Small feud existed for only a century. There were hundreds (even thousands) feuds in Middle Ages. You cherry-pick one of them and call to make a civilization from it. Feels utterly incorrect.

The Jurchens held territory almost equal to the Franks and Holy Roman Empire combined, but with even more manpower. The Song is even more of a giant. Apparently, that small feud also led to the invention of gunpowder warfare.

I doubt there are hundreds of conflicts as large as the Jin-Song wars. In Europe, I guess only the Crusades is comparable (and maybe Mongolian invasion of Eastern Europe?), but we don’t make Europeans into one single civ, do we? I don’t think there’s any comparable ones in the Americas or Africa, but I am rather clueless on this. There are may be some comparable conflicts in South Asia (Delhi Sultanate vs Mongols is one), and probably none in Southeast Asia. For context, just the Seige of Northern Song’s capital involved army sizes about triple that of the Third Crusade (I chose this because it is in-game as the main conflict of Saladin’s campaign). Half a million people were displaced in the aftermath.

In fact, most of comparable conflicts seem to involve the Mongols (or is one of the frequent Chinese civil wars), which is kinda cheating.

I don’t think Chinese government is going to allow Tibet, or others actually…
I personally would love to see them!

AFAIK, Jurchens, Khitans, and Tanguts are fine (since those names appear in Chinese history textbooks and numerous dramas), however Tibetans aren’t ok.

However the problem is I don’t think Jurchens and Khitans are unique enough, especially when we already have civs like Mongols, Huns, Cumans, and Tartars.

Theres a ton of civs in the game that had a main state that lasted 200 years and none of those civs except with Mongols were as powerful as them. Not to mention they still were a regional power for the entire middle ages, they werent just a short lasting civ.

Jurchens were also extremely powerful but tbh I agree they arent totally necesary. I think they are still more worth adding than most Euro civs people want.

im all for new civs but I want new features, not so much of the same old “stats buff” or different in stats, but more unique ones. the new burgundian charge attack, the donjon built by infantry, these type of new features.

along with new building graphics, thanks!

However the problem is I don’t think Jurchens and Khitans are unique enough, especially when we already have civs like Mongols, Huns, Cumans, and Tartars.

Tbh gameplaywise Jurchens are closer to Persians than to Mongols, Huns, Cumans and Tatars

Khitans are a bit trickier yes

So do you mean the Chinese is shipping their censorship to the whole world now?

Other than this post by an anonymous user, is there any evidence of the Chinese government having any influence, either way, on developers’ decisions? It seems like there’s a lot of speculation going but what is the actual basis for it.

There are more than enough games censored in China. And the developers won’t do a dlc they can’t sell there or makes the China version of the game incompatible to the rest of the world.

As a Chinese player I find it amusing that people exaggerate Chinese government censorship so much. We absolutely learn about all these civs from our history textbook. Why won’t we allow them in a history game?