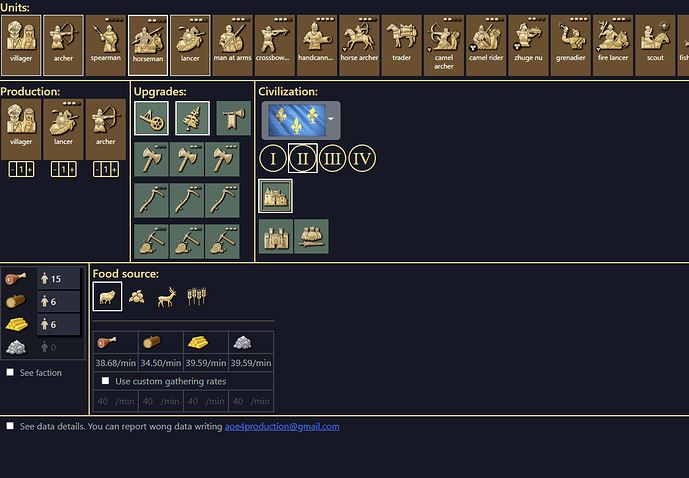 Just a suggestion, in case you are the author, it would be cool to add the number of buildings needed to reach that production.

Yes, I am the author. You select how many buildings you want to produce out constantly (production block, plus/minus buttons). And it tells you how many villagers you need to support this production. 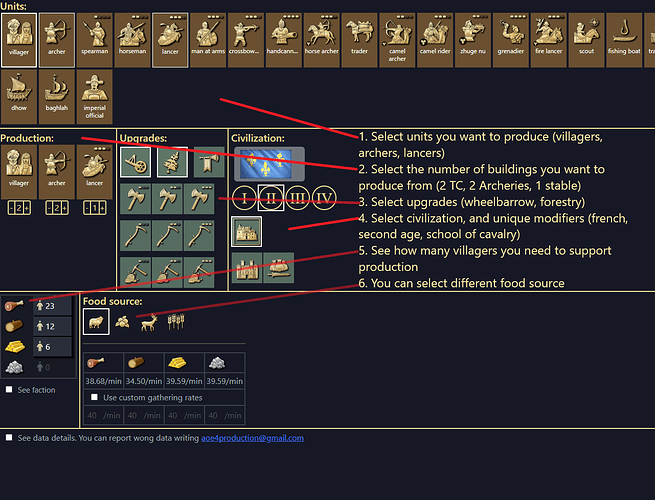 I don’t know how you put the rates, but I reported that the Chinese collected less per minute. However overall the app is very good.

The Chinese farm rate is lower, which means that the officer’s bonus does not fulfill its function in the farms, as seen in the video the Chinese collect 35 per minute while another civilization does 38 per minute. So the use of the official that gives a bonus of 10+2 for each go results in: 3x12+5= 41 x/min It is not the case of the rate of gold and stone that if it complies, with the officer, they collect 45 x/min. I don’t know if this is deliberate please check.

Ah ok, the units count is the TCs constantly producing, nice, I thought it was the number of villagers/min produced.

So, if I put 2 knights it will calculate the number of villagers needed to produce knights constantly from 2 stables. Nice!

Currently, farm gathering rate I put in application is 36.25 for all the civs. Source When Should You Get Food Upgrades? (AoE4) - YouTube, (580 / 16 = 36.25). I did not put gathering rate reduction for Chinese, do not know the numbers. But you can emulate officers on food, gold etc. 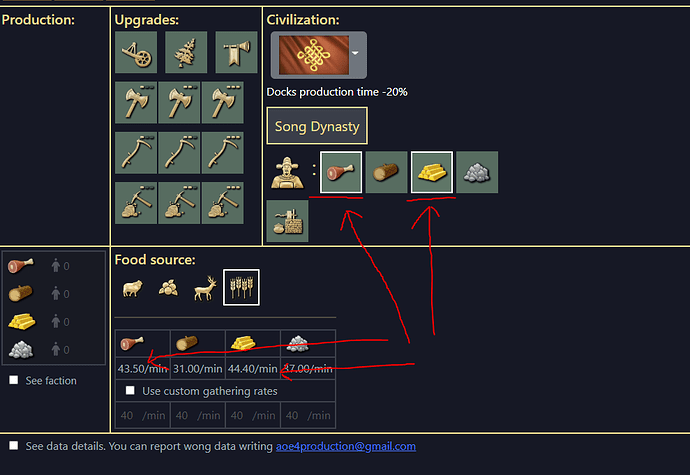 as seen in this video, it does not analyze hunting because only “survival” affects hunting, please correct, horticulture and the others do not affect hunting

I don’t like it as much as you do. But some maps have ponds are they also water maps? thanks anyway

Horticulture and the others DO affect hunting. In the video “survival” is not analyzed because “survival” affects only hunting, but other upgrades like “Horticulture” affect all food sources.

but in the horticulture video he doesn’t compare it to hunting, I’m sure because I’ve seen it in the game

but undoubtedly your application is an advance 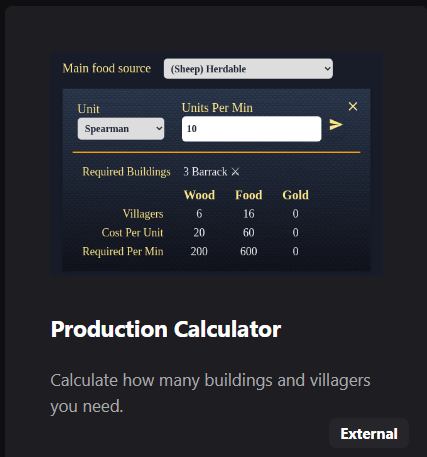 I do think fish should still play a role. It dosnt need to be a watermap.
Hybdrid maps are very popular.

And fish play an important role.

On maps such as Spires i always open with Fish as the gatherrate is faster than deer.
With the mobile Ger one can easily get the first 2k food from the nearest pond.

Some maps such as Nagari or Megarandom even has deepwater fish. And it would be interesting to see if when or if its worth going for fishing ships for your food econ.

We also going to see new maps such as 4 lakes and Kawasan which is going to be popular hybrid maps.

Other than that, great work on the app. Works well on a phone as well which i like.

he takes data from age of noob, but he did not analyze the water because the boats did not go to the nearest dock Hi, that’s a great start, thanks!

This project promises a lot, greetings!

villagers time is simple, 4 half time and 10, 1 quarter time, check with stopwatch

Very cool! The game should already be doing this though.

Really cool, A suggestion I have is to show the tech upgrades info.

This could also be a good community GitHub project, though like @McZelAir said it should be added to the game.