I always feel Naval need to be better, here my ideas :

Transport feature card could be available in Castle Age logically, who make those ships more resistant, and a last feature in imperial age would make the limit to 30 units and more resistant.

The bigger ship like Carack fire heavy bolt who deal more damage to the building and units, but are more slower in speed and attack speed.

Galeon could be available in Imperial Age, a boat with Great HP and attack, but with a high cost, the most expensibe among the ship. Maybe he can be the only ship who can train units, maybe only infantry and cavalry, not siege weapons and take some units, but less than the transport ship.

Sea walls, can be built by fishing ships or maybe a “worker” ship of some other kind (boat dealer). That will help to stop the entire game being lost following one bad fight and make naval battle more interesting, the should be inspired by this campaign honestly, where those ships can build something like this : 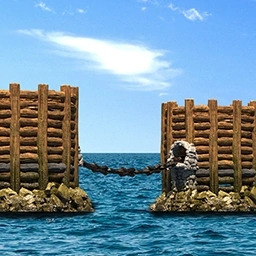 Some civilisations could have a main naval units like castle in port. 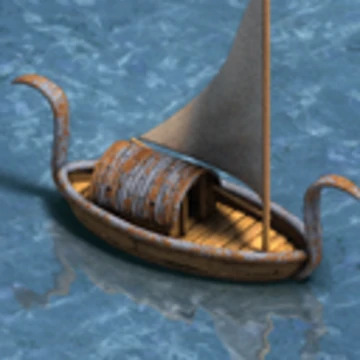 Frankly anything to shake up water play, and you have some really nice ideas here. A stronger counter mechanism is definitely needed; it’s basically impossible to win back water once lost.

Another thing is like to see is sea walls, built by fishing ships or maybe a “worker” ship of some other kind. That will help to stop the entire game being lost following one bad fight.

Wow great idea for the wall, i will update the post and credit you.

Agree with some of the ideas, but disagree with the huge ships / transport ships. I agree that the game could use a few more Unique Ships for some civs (italians, Malay for example).

Upgrading the fishing ships would be cool too if it’s a tech that needs to be researched.

The turtle one could be available for some civilisations, Nordic one in my opinion.

This however doesn’t make any sense.

I think for naval we still need the rock-paper-scissor structure but we need more classes here. Right now we just have just one or 2 classes on water I think. With more classes I think water will become interesting.

I understand the water play is too one-dimensional, and absolutely agree this is not at all as much fun as playing on land for variety reasons, however I doubt the developers would ever shake it that much. The game still has to stay close enough to the orginial one. I also appreciate the work and thought you put into this, but I am not too found of the “large units” theme.

Additionally, some civilisations were just much more navy focused than some other. Balance is always difficult, but I suppose it is at its hardest when having to balance different sorts of maps, and particularly land, hybrid and naval.

By the way, has anyone else noticed that since DE came out, a lot of new civilisations don’t get a lot of Dry Dock love?

I mean some civilisations could have this special ship, big transport ship could be very interesting in end game for more strategy instead of a little ship, a big one, could be interesting.

After all change, i’m sure they will make a change, water is too predictable, this is why they need to add more elements, mechanics, in the ports, to make naval a way to win the game too or to take more in advantages etc…

Yeah you mark a point, i think we need too differents boats for civilisation, who can be advantage with weakness like castle.

Giving Longboats to Sicilians or even Franks wouldn’t be so weird, since the Normans used them. (But I’m not actually suggesting that Sicilians or Franks should get them.)

Do you actually have AoE2 Definitive Edition? I’m just wondering, because a lot of your pictures look like they come from HD or something. DE already has sea walls, sea towers, and sea gates, they just can’t be constructed by any units.

Sea towers, walls & gates should all be constructable for all civs, just like palisades.

Another opportunity to improve water balance would be to diversify the amount of buildings. Given that docks are used for everything water related, all ships compete with one another for training time. Something really cool I read somewhere is to make the Harbor a common building for all civs (giving Malay some sort of bonus to their Harbors), but more expensive (maybe with a stone cost) that allows you to make the more powerful warships, transport ships and their respective upgrades; this has the advantage of giving all civs a viable way to keep a water presence and preventing games from snowballing too early. The Dock might remain as a civilian focused building, cheaper, used primarily for fishing ships, transport ships, trade cogs, “trash boats” and fishing related bonuses. I would put the trash boats here because the cheap but weak warship alternative should logically belong to the cheaper and easier to mass Dock, and to give the player the chance to make a comeback when gold and stone are inaccessible. Water gates and walls would be a great addition as well as you have already proposed. Another cool idea I saw in a mod was the concept of buildable sea towers and fishing platforms to allow fishing ships to gather fish further away from the coast. These two proposals give much more importance to water control in late game, as well as creating an interesting decision as to whether keep the fishing ships at a safer distance from the coast but higher initial investment for fish traps and sea walls, or the greedy fishing platform to grab deep sea fish for minimal investment but more vulnerability and higher dependence on sea towers.

They look like they’re from AoK/The Conquerors to me; the water in HD has reflection effects (which I think can’t be disabled) and doesn’t really look like that.

Good point. Either way, unless your computer can’t support DE, I don’t see why you wouldn’t have it by now.

I believe expanding water gameplay would be the future of AOE2, people always talk about adding new civ and it is unrealistic to do without new mechanics.

I would love to see ram ship, boarding ship, a ship with catapult, a raft with mantlet, etc.

However, big change are not welcome by the developers nor majority player base.

Well, you know what they say about changing the water meta too much…

What if there were treasure Islands you can harvest gold from with trade cogs?
I think it could make water play more interesting, finally giving something to fight about in the water. (except fish ofc)

What also should be considered is some kind of possibility to build a small “water base” that gives about equally good defensive protection as land bases.
Currently we have so extremely dominant water civs as water is so snowbally. Once you pushed your opponent off it, it’s really hard to have a comeback. With some options to at least have a small water base that can’t be destroyed and raided as easily, also weaker civs could possibly just add some fish boom and only make as much military as needed to protect it, giving up the fight for water control.

The thing is, making water military more intersting is surely one nice thing. But without having interesting multidimensional things to actually fight about the best military design can’t really safe it.

We could have sharpened stakes as medieval water mine as another option to contest/protect early water.

The thing is, there are too many creative ideas if we think outside the box.