Explore history in all of its epic moments in Dynasties of India – the exciting third expansion for Age of Empires II: Definitive Edition. It is available now for pre-order or to add to your wishlist – we know you’ve been waiting! Here are some of the new features you can expect:

Dynasties of India will be released on the Microsoft Store and Steam on April 28, 2022! 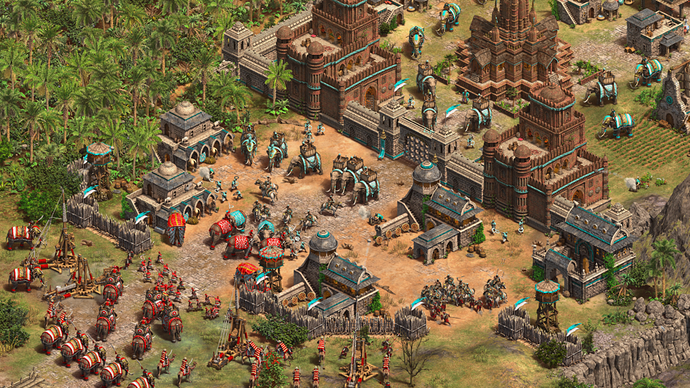 Navigate the winding rivers and dense jungles of Bengal as you build a thriving economy to fuel unstoppable armies of elephants. The Bengali unique unit is the Ratha, a sturdy chariot that can switch between melee and ranged attack modes.

The Bengalis focus on elephant and naval units. Bengali elephants, in addition to benefiting from a strong technology tree, are more resistant to anti-elephant bonus damage than those of other civilizations. Additionally, their attack speed can be boosted by researching the unique technology Paiks, which also improves Rathas. Bengali ships regenerate hitpoints, increasing their longevity. These strengths are built on the back of a strong economy.

Bengali Town Centers automatically spawn additional Villagers whenever each next Age is reached, and the Bengalis can support a larger economy after researching the unique technology Mahayana, which reduces the amount of population space that each Villager takes up. Finally, Bengali trade units and those of their allies generate food in addition to the gold that is accumulated during each trip to/from an allied Market. 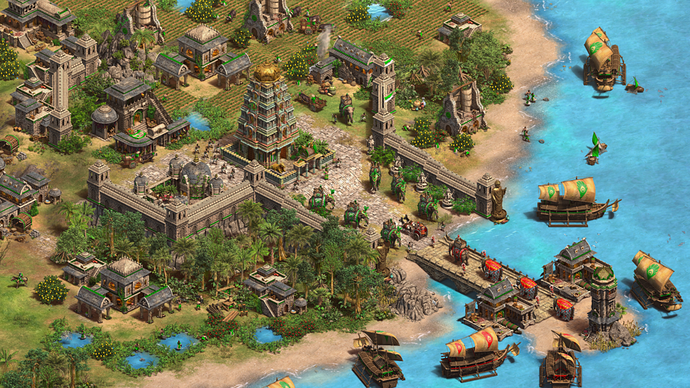 Seize control of the lucrative Indian Ocean trade routes and utilize advanced metallurgy as you build one of the wealthiest sea empires of medieval Asia. The Dravidian unique units are the Urumi Swordsman, a warrior wielding a scathing flexible sword, and the Thirisadai, a massive vessel that dominates the high seas.

The Dravidians focus on infantry and naval units. Cheaper Barracks technologies, a strong technology tree, the devastating Urumi Swordsman unique unit, and the unique technology Wootz Steel — which causes infantry and cavalry attacks to ignore the armor of enemy units — make Dravidian infantry among the most formidable in the game. In addition to being able to access the powerful Thirisadai, Dravidian naval power is augmented by increased carry capacity for Fishing Ships and Fishermen, as well as the fact that their Docks and those of their allies provide additional population room.

However, another Dravidian trademark is pure versatility. Upon advancing to each next Age, the Dravidians receive 200 additional wood that can be put towards a variety of uses and strategies. Their Skirmishers and Elephant Archers fire faster, making them more effective in combat. Additionally, their elephant units will regenerate hit points once the unique technology Medical Corps is researched, increasing their longevity. 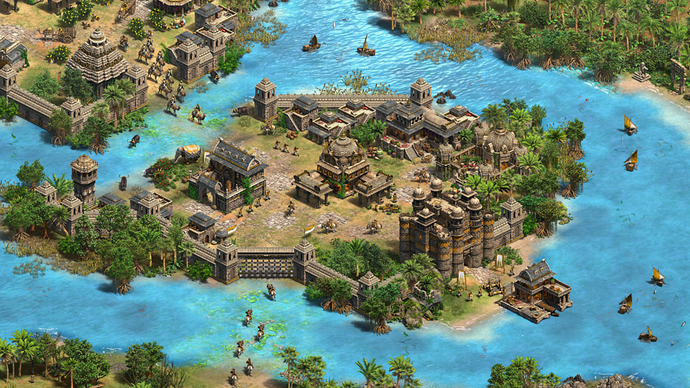 Ride swift mounts across the fertile fields and open plains of western India and unleash diverse armies of sturdy warriors upon your enemies. The Gurjara unique units are the Shrivamsha Rider, a speedy cavalry unit that can dodge enemy attacks, and the Chakram Thrower, an infantry unit that unleashes volleys of deadly metal discs.

The Gurjaras also begin the game with a Camel Scout instead of a Scout Cavalry, and can train more Camel Scouts starting in the Feudal Age.The Gurjaras focus on cavalry and camelry. Their mounted units deal additional bonus damage against the enemy units that they counter, while their camelry and elephants — and those of their teammates — also train faster. Gurjara camelry also benefit from additional armor once the unique technology Frontier Guards is researched.

The Gurjaras also benefit from a variety of useful economic bonuses. They begin the game with two additional Forage Bushes near their Town Center, and they can garrison livestock inside of Mills to slowly but indefinitely generate food instead of slaughtering them with Villagers. Gurjara Docks can be garrisoned by Fishing Ships, allowing theirs and those of their allies to take refuge when under attack. Finally, researching the unique technology Kshatriyas reduces the food cost of all military units, making them more affordable and easy to mass. 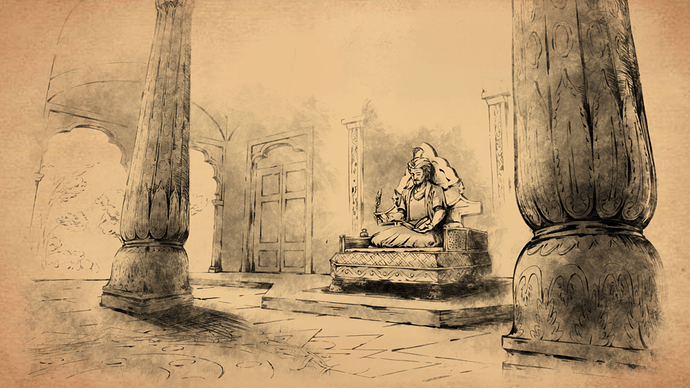 Nearly a century after Tamerlane’s death, his descendants are still fighting for supremacy in Transoxiana and Persia. The youngest among them is Zahir ud-Din Muhammad – also known as Babur, ‘the tiger’. He dreams of restoring the crumbled empire, but another wave of invading horsemen from the northern steppes is about to change everything. In this campaign, you will play as the Tatars and Hindustanis. 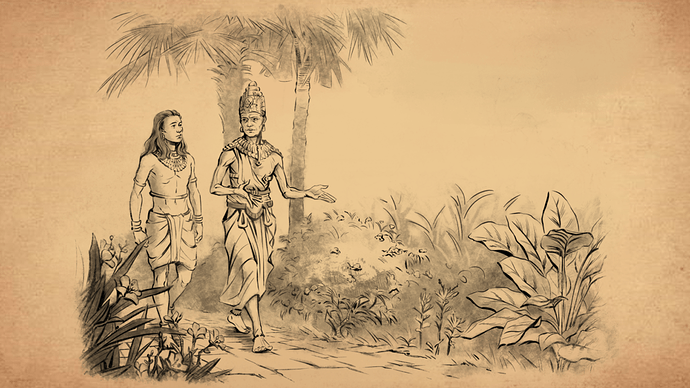 The dread of inevitable corruption plagues the ambitious Rajendra Chola as he navigates the harsh political climate of south India. Can Rajendra escape moral decay as he expands the empire that he inherited from his father, or is his fear of corruption the true enemy within? In this campaign, you will play as the Dravidians. 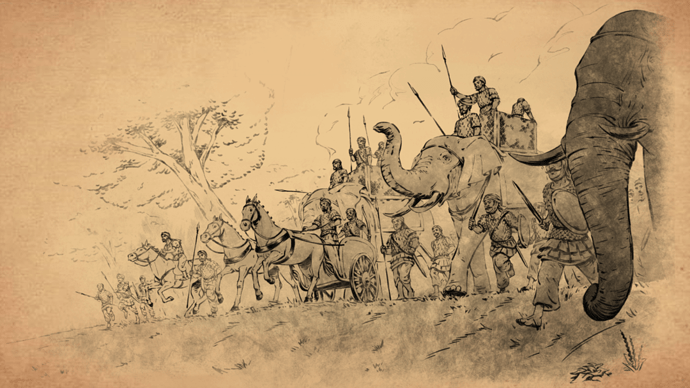 Guided by the teachings of Mahayana Buddhism, Devapala rules a rich and vibrant empire. However, as dangerous rivals threaten his realm, the ambitious emperor finds it increasingly difficult to balance his policies with his morals. Will the ends ultimately justify the means, or will Devapala’s quest for his own enlightenment and that of his subjects fail? In this campaign, you will play as the Bengalis. 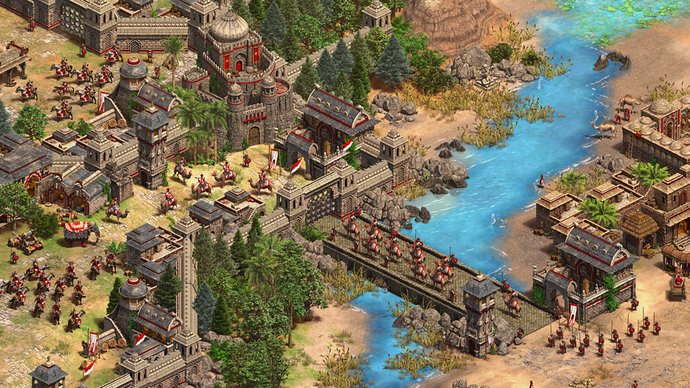 Stake your claim to populous, diverse lands and lucrative trade routes as you parry foreign invasions – or step into the invader’s shoes yourself. The Hindustani unique units are the Ghulam, a heavily armored infantry unit adept against masses of archers, and the Imperial Camel Rider, a powerful unique upgrade to the Heavy Camel Rider.

The Hindustanis focus on camelry and gunpowder units. Their camelry attack faster than those of other civilizations and deal additional damage to buildings, while their gunpowder units are more heavily armored than their counterparts. The Hindustanis can also research the unique technology Shatagni, which increases the range of Hand Cannoneers.

The Hindustanis also have an excellent economy. Their Villagers are less expensive than those of other civilizations, and the unique technology Grand Trunk Road boosts all sources of gold income. Additionally, they can construct the Caravanserai, a building that heals and increases the speed of trade units within its vicinity.

This civ is available to play without purchase of Dynasties of India.

What are your thougths about the new dlc?

14 Likes
Dynasties of India DLC + Discussion
Camel Scout (hype and predictions thread)
What I like about the new Indian civ designs and what I would overthink
PlumpDucklin April 14, 2022, 6:47pm #2

looks awesome, thanks for putting everything together, where did you get the stuff like the tech trees? just odd that its not plainly obvious to get this info

im busy looking through everything now, looks really good, and im surprised how many things people were able to guess right

Into the advice it says: “Bengalis tech tree” as example

sorry thats what im asking, WHERE does it say this. on the steam page? Dynasties of India - Age of Empires here? 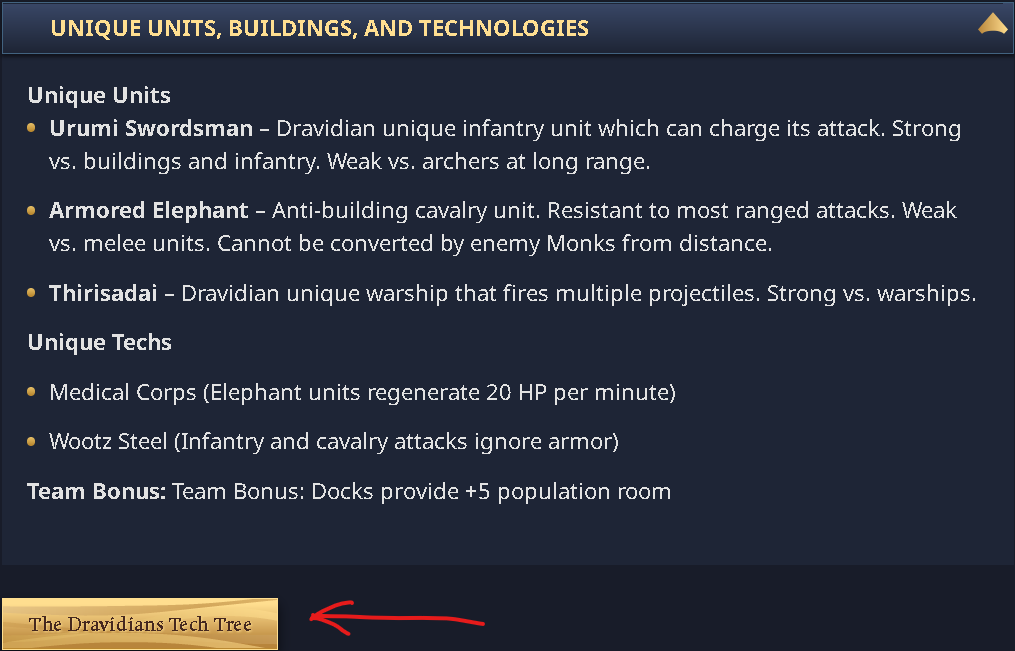 It doesn’t, but you can find the tech tree links here: Pre-Order Age of Empires II: Definitive Edition – Dynasties of India! - Age of Empires

I was searching for a while, too.

The Dravidians have the worst stable in the game apart from Meso civs by the looks of it. Pretty cool. Like all the civs. @Zero17893, with formatting your post, after listing all the unique units, press enter/return so the unique techs render properly, and then do the same to move the first unique tech down. So for example this:

Just if you want to fix it to make it more readable.

copied and done. Thanks for feedback!

I just noticed the Gurjaras don’t get any fully upgraded units.

They miss the last melee attack upgrade, so no FU cavalry or infantry (also: no complete infantry line).

They miss the last archer armor, so no FU archers or gunpowder and such.

No siege engineers, so no FU siege.

No dry dock, so no FU ships.

Curious to see how they will play.

Actually, they have Caravan, so fully upgraded Trade Carts.

Oh right, loom and sappers too, so FU villagers.

(Also: their camel riders in particular are pretty much just better than generic fully upgraded, and unique units are always a weird case as they can be balanced around missing techs.)

Good point, but they lack two man saw, does that count? Because they aren’t as efficient as they could otherwise be, so are they still fully upgraded?

They might have fully upgraded Siege Elephants, depending on whether those are affected by Blacksmith upgrades. I also wonder whether Siege Elephants count as “mounted units” and would therefore benefit from the extra bonus damage, but I guess probably not.

I expect their bonuses and unique techs to cover for the lack of full upgrades in the case of Camels and Elephant Archers.

EDIT: also, if a civ doesn’t have Heresy and/or Faith, does that mean it doesn’t have any fully upgraded units? Interesting that Gurjaras have both Heresy and Elephants…

I have a feeling that giving Shatagni +2 range instead of +1 will be the same as when Timurid Siegecraft got +2 range instead of +1 for trebs–meh. I mean +1 extra range is nice but it won’t make it any higher of a priority than it used to. Also, will the accuracy be even worse from maximum range? Maybe the price is reduced so that it’s more cost effective. I feel like since their ROF and accuracy is inferior to archers they just aren’t easy to micro so extra range isn’t as important to HC as it is to archers.

Also the caravanserai would be much more beneficial if it allowed carts to garrison inside instead of heal. Post imp units are strong and usually 1 shot/hit trade when raiding since carts have 0 armor so healing won’t do a whole lot if carts die instantly. You could even let trade heal once garrisoned inside which isn’t all that strong since you wouldn’t be getting gold.

I feel every civilisation has representation in the game now, except the Jews. Can we expect the arrival of the Jews at anytime in the future? I know many would welcome such an addition to the franchise, and the technological abilities they would bring.

Who were the Jews? i don’t know them.

Ok, what state would the jews be based on?

Historically, I’m unsure, probably Palestine, or whatever Palestine was formerly called. They are an ancient civilisation, their origin maybe named as something else.

During Medieval times Jews were culture, but not even state, let alone empire. They were somewhat impactfull, but they dont belong to the game set in medieval times.
Maybe you can fit them in AoE 1.

The main difference is that now they will have the same range as a siege onager with siege engineers, so they can mutually kill each other