Please add walking/moving sounds to
Footunits and Mounted Units. When large number of units will move it will create an epic marching, thundering cavalry sounds.

This is something I wish as well. I think it’s still possible to add via old game itself.

I didn’t mean other game but old AOE games can do that but movement sounds won’t so much in sync. Via modding the game it’s possible to add those foot sounds that you want to.

Oh that would be cool!

yeah it will be possible to add via modding but finding proper sounds is difficult.
Wish it were added officially.
It is just a quality of life improvement.

What do you guys think of this idea?
I don’t really understand sound modding in DE (wem files) to test this idea. If someone can guide me/help me it would be great.

The idea is similar to how attack sounds in the game work that plays for one unit (cling). But when a large number of units start fighting the cling-cling adds up and it sounds great.

You probably already know about official audio modding guide, but I share it anyway just in case

I don’t understand how is the numbering done?

there is no such reference to the file names in dat file. if i have to add a new sound to the game how should i name it(what number) and how should i link it in dat file?

there are not any mods in the workshop that add new unit sound to the game with data mods for reference.

“Changing or adding sound bindings in the Data File” section does not give enough information?

I am not really certain. There is “mhit_longsword1” in “Unit sounds” sheet in spreadsheet referenced by that guide. 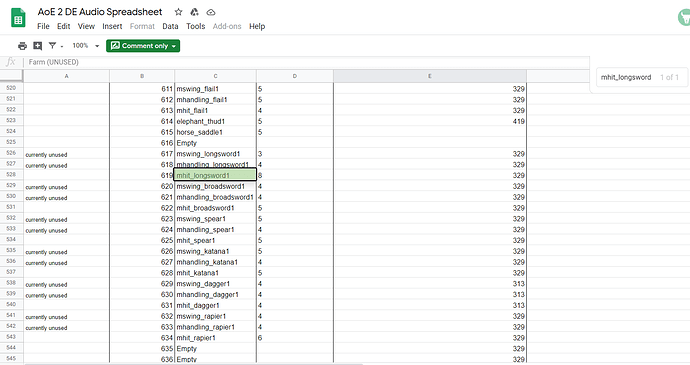 ’
that can be checked in dat file as well

the problem is which .wem file in particular contains that sound?
all wem files(containing the sounds) are located in Steam\steamapps\common\AoE2DE\wwise folder and are named as numbers.

@StepS7578 Could you enlighten Juggernaut about this audio modding issue?

There are two types of IDs: Event ID and Sound Node ID. What you are seeing in the “wwise” directory of the game are Node IDs of individual audio files, however what is used in the data file are Event IDs.
Event IDs are documented in the “In-Game Play Events” sheet of the spreadsheet, and Node IDs are documented in the “Audio Sources” tabs of the spreadsheet. Note that you will mostly only see campaign audio and music as bare files (streamed on-demand files). Most in-game sounds are in BNK files instead, such as SFX.bnk.

Events are defined by the WWise engine and may combine multiple sounds playing in unison, with random selections etc., referred to by the single Event ID.

You have the choice to either use Event IDs provided by the spreadsheet/dat in the Cyan box, or use the “Sounds” modding tab to fill the Dark Blue box. The way the Sounds tab works is, it looks for files named the way they are there in resources\_common\drs\sounds. Such as “mhit_longsword1.wem”, then enables the legacy system of picking what sounds to play if they are present. If none of the files in the sound group (Sound 619 in your case) are present in the above directory (modded, profile, or local game), then the Event ID is used and the built-in Event is played for that sound.

To add a new sound into the game and bind it to unit/graphics, simply create a new group on the Sounds tab. Add filenames, delays and probabilities as needed, and then fill the sound ID into the Dark Blue cells of unit/graphics Sounds. Don’t forget to place the actual files into the drs\sounds folder. (This procedure is nearly the same as in HD, except that files are .wem instead of .wav, and they are referred to by their literal filenames instead of the “File DRS Resource” IDs.)
If you wish for a fallback sound to be heard when your required WEMs are not present, then you can insert one of the preset Event IDs into the Cyan box. That will make it compatible for those who somehow don’t have access to the modded sounds folder.

If you want to extract BNK files to obtain the built-in WEM files, you may require third-party software.

Does this mean, that sounds can only be modded as data mods?

Thanks @StepS7578 I tested by renaming some .wem files from wwise and placing them in sounds/drs and then using data editing to include them in game and it worked. But I noticed that the sounds don’t seem to overlap like attack sounds, they play one after other…or maybe I am doing it wrong. Is overlapping of sounds, looping of sounds related to wav to wem conversion?
I have yet to find a proper horse step wav and convert using wwise to wem.

What do you guys think of this idea?

I think it’s a cool idea, like total war… Keen to see how it goes

Does this mean, that sounds can only be modded as data mods?

Only if you want to add new ones or change bindings. You don’t need a data mod to replace existing sounds, since the dat already has the Sounds tab prepared for everything used by the game.

the sounds don’t seem to overlap like attack sounds, they play one after other

Currently this will depend on the category of the played sound. Most in-game sounds and effects modded this way will overlap (up to a limit of 50 at a time), however things like unit/building selections, unit created, some unit orders, will be limited to one or two sounds at a time for their respective group. UI notifications (except buttons) are limited to 5 at a time. This behavior may be revised and improved in the future.