When playing 3 (human) vs 3 (AI) online multiplayer games and up (4 human vs 4 AI), there is a high chance of experiencing a late game crash. Usually this crash occurs in the phase of the game where AI bases are under heavy attack. We’ve experienced this issue with al AI players still in game, as well as in games where multiple AI players have already been defeated. Note that we’re not sure if this bug is human vs AI specific, as we haven’t had the chance to play 3v3/4v4 human only.

Once the issue occurs, usually one or multiple players experience a frozen screen at the same time followed by a not responding window and subsequent crash to desktop. We’ve had occurrences with all players crashing at the same time as well as games where one human player was able to continue play after the rest had crashed.

What was supposed to happen if the bug you encountered were not present?
Gameplay continues, able to finish game once all AI players have been defeated.

What actually happened (what went wrong) because of the issue you’re reporting?
Games crashes mid-battle for multiple players.

I wonder why would they release a game in such state.

I fuck1ng hate these companies man…

Another day, another 3v3 late game crash. This time I was able to look at the crash log for two computers. For both computers in the match, the Age3Log only displays startup information (PreGame), and nothing after that.

I was able to lookup the crashes in Event Viewer on both computers and found identical error reports for both devices: computer1-crash.txt (642 Bytes) computer2-crash.txt (644 Bytes)

Same here. Played two multiplayer matches, both were 3v3; One casual the other ranked. Both crashed after ~30-40 minutes with the following error:

Edit:
I reinstalled the game and updated to the most recent version, played a match of 4v4 and it crashed after ~50 minutes:

Similar issue while playing on Steam for the PC. Played 3 (Human) vs 3 (AI) on the Extreme difficulty. This happened 2 out of 2 times where it was an hour into the game, and lots of armies were being made and attacking. However, both times the games crashed were the second we defeated the first AI.

Seconded. Within seconds after the first AI goes down, the game freezes for all human members.

The exact same thing is happening to me. 4v4 PvP or 4v4 PvAI, 8 players FFA, 3v3, etc. ONLINE ONLY! When it happens, there’s often 2-3 players crashing at the same time and the rest of the players do not suffer from the crash. Sometimes all players suffers from crash. Also when a crash happens, you cannot reconnect to the game wich is a huge bummer. In 2020, you expect to be able to reconnect to your game just like in LOL, CSGO, Valorant, etc. The multiplayer experience just doesn’t feel like there are dedicated servers at the moment. By that I mean the stability is not good. When I play in local, the game does not crash at all, so that’s why I think it’s coming from their side and also the fact that multiple players crash at the exact same time.

Me too. Me and my friends play often online 3vs3 or 4vs4…and every time the game crashes and freezes in late game. then all pcs get the crash.

This post is still relevant for me and my friends. It’s extremely frustrating. I couldn’t finish a game 6 times in a row in 3v3 or 4v4.

I can add to the topic one bug in those configuration :

Could add weird IA behavior, like revolution in treaty for no real reason, tend to overproduce artillery (Kangxi with 30-40 infantry mortar oO), and regret that IA not that good in treaty 30+, even in expert.

Did the last patch resolve the problem for you guys ?

Just updating that this is still happening in the exact same way. A 3v3 yesterday and a 4v4 today crashed in the late game after defeating 2 AI players. Running the latest steam build.

I hope support team are taking that seriously, because a large base player is playing this game on team games, espacially with friends against AI on treaty.
The more this problem stay there, the more players will be pissed, for a good reason.

The game reputation is severely damaged by those crashes, which is sad from my point of view. I really hope this game have the same love than AoE 2 DE with improved IA and polishness.
Hold on !

Just happened to me in 8 player game ~ 30 min mark. This is totally unacceptable.

This issue is currently being tracked. Thanks for the reports

got also the last few days alot of crashes, also mostly after 40 mins 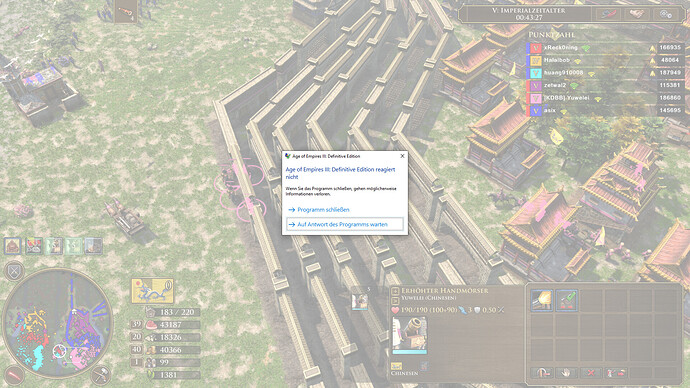