AoEDE confirmed to be ported to the AoE2DE engine

Guys we did it. Microsoft announced in their anniversary stream that they will bring AoEDE to the engine of AoE2DE. My request and the one of many others has finally been heard.

What do you think the effects of this will be?

Well I think it will bring new civs to game and probably new techs and units and buildings.

OMG, this is awesome.

I can’t find the announcement can you share it please? This is a live video which is still ongoing. Any other video link that isn’t an ongoing livestream or any news article? Can’t find it here.

I’m excited for this! I’m travelling in Greece at the moment and its making me yearn for OG AoE. I was never convinced that AOE:DE would be worth my money. But if its on the AOE2:DE engine I’ll definitely buy it. I hope that the civs will come with unique wonders and with architecture sets that accurately reflect them (eg. Sumerians use the Mesopotamian set).

Any source at all? It’s not anywhere. Here you go. I linked to the right time. It was announced right at end of the presentation supposedly.

Do you know when will they port it?

This is really an aoe2 update, aoede is still the neglected child that they have forgotten for over 2 years and this DLC is a nail in the coffin confirming they really don’t care for the first one.
About new civs, from what I’ve been told doesn’t seem to be new ones, just new techs and more balance changes.

Here is the announcemente for those that missed it.

No, it cannot be true… can it be? I have dreamed about something like this to happen for so long, and now I just feel like in a dream yet lol

Thanks to all of the first Age community that kept believing when so many have fallen along the way! And thanks to the devs that still care for the game and listened to our suggestions to keep it live!

Honestly, I will only believe for real after seeing more solid news, but that is very encouraging so far! 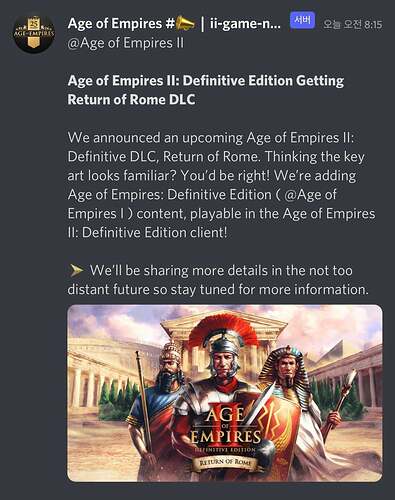 I far prefer the classical period to the middle ages so this is good news for me.

I can only hope that this AoE2DE DLC is a logical sidepeoduct of overhauling aoede. As they clearly said “we will bring aoe1de into the 2de ENGINE”. engine ≠ game. So
for me this is more than just porting some content.
They also sad that more news will come in 2023, so I hope it is a good sign that the DLC already got announced.

I think it’s the same thing.

I assume it will be within AoE2DE but you have like a toggle in the main menu to switch between AoE1 and AoE2.