I just watched Assuie_Drongo’s video where he and many other people actually think that either AoM2 or AoMDE will be announced in the upcoming event on the 25th of October. The reasoning for this is this picture here where they believe that where it says 25 years age of empires, it’s a placeholder for an AoM announcement otherwise why put it like that? 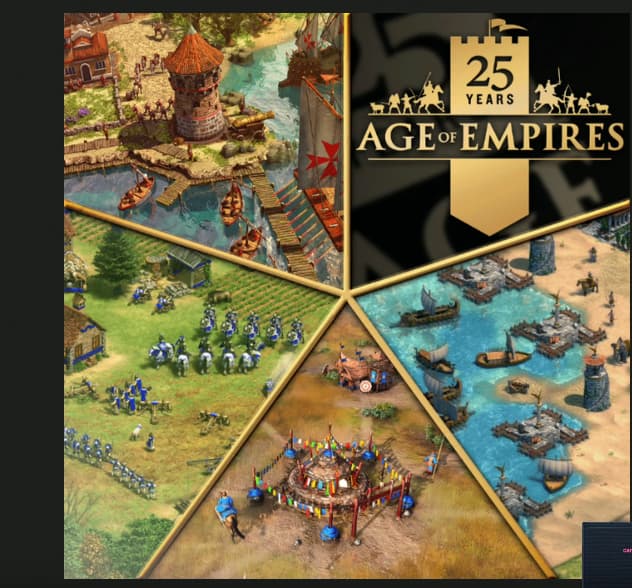 I know we fans have wanted an AoMDE or even better AoM2 for a long time, and right now I feel pretty optimistic about this. What are your thoughts about this?

Check out his video here: People Think AoM2 Is About To Be Announced - YouTube

AOM2 is announcement is impossible in 2022-23 in my opinion. AOM DE has a good chance.

They might give us the DE of AOM and also officially announce them working on AoM2 so we can be hyped and play the DE in the meantime.

AOM DE is most likely, is the last original game without a DE, and AOM truly needs a DE adressing the poor EE, and also please for the love of God make some Chinese Mythical units to insta ko like the others, and redo the campaign because that one was truly poorly made.

I really hope you’re right, but there is one thing in the image that strikes me. Besides AoM, AoE II has a single square, while all the rest have two. Also, since the Definitive Editions were launched, AoE II has gotten the most DLCs and patches.
I just hope this time it does not turn out to be simply another DLC for AoE II or AoE III. I dont have a problem with the developers churning out more DLC for these two games, but I do think it is time AoM and AoE I got some attention. Just my personal opinion.

Couldn’t agree more with you here.
Show some love for AoM and AOE1 community!

I actually think the AoM square is related to the AoE2 square. AoM + AoE2 = AoM2!!! So yeah I believe its a hint at AoM2, not AoM DE. Is this a stretch?

What are the ‘age’ games?
Does ‘Age of Wonders’ count? Or ‘Age of Pirates’? ‘Age of Chivalry’ maybe?

It’s not a 25 anniversary of ‘Age’ series whatever that is, but ‘Age of Empires’ games, and that series started in 1997 with AoE 1, not AoM in 2002.
And no, they don’t have an ‘every Age game’ there. Where’s ‘Age of Empires: Online’? Or various licensed titles for mobile phones?
If that was a list of everything made by Ensemble Studios you would also have something like ‘Star Wars: Galactic Battlegrounds’ that is an ‘Age’ game in everything but the theme of the game, as it’s AoE2 in Star Wars sauce. But of course, LucasArts is gone, and they wouldn’t have the desire, and probably money, to get that license to make SWGB2.

They should make Age of Mythology 2, sure, but this is a specific celebration event related to just Age of Empires series. It’s a bad and/or weird way to announce a sequel to AoM.

It’s a 25 years of Age of Empires event, but… there’s an AoM square there - they put that for some reason. And I really think it’s Age of Mythology Definitive Edition.
Hopefully both AoM DE this year and AoM 2 next year, perhaps?

Agreed. But again, I really want to think they’re going to release Age of Mythology Definitive Edition. Maybe they’re working on AoM 2 for next year as they did with AoE IV when they released AoE II DE.

I actually think the AoM square is related to the AoE2 square. AoM + AoE2 = AoM2!!! So yeah I believe its a hint at AoM2, not AoM DE. Is this a stretch?

Yeah. It could be AoM 2. It’s a possibility.

AoM exists in a weird spot. It’s a spin-off series, and there are some arguments for including it in the celebration and some for not doing that.

A teaser for DE of the first game is more likely than announcing a sequel, but that’s still not the best way to do that with splitting attention with AoE games, in an event for AoE fans and that group is already rather small in the grand scheme of things.
It’s a good place to drop some detailed videos, interviews etc. but the new game deserves more spotlight and attaching an announcement to a celebration event like that is not an optimal thing from a marketing standpoint.
Unless it much lower budget/profile project, like AoE 1 DE, and they’ll wait with AoM2 for AoE 4 to be older, so the two won’t collide.

AoM has its 20 years anniversary which equally important but they didn’t announced a worthy celebration so the only conclusion is a surprise party.

Yes it’s a spin off of you want to call it that way. But a really good one and also one which sold well and has a loyale community…

Honestly you are so full of negativity in your posts I would like to know why.

What do you want to tell us with that?

That CA, who do TWW and TWTroy: Mythos, plans to do a new game? I mean nice to hear but we don’t know the genre yet or what does make you so certain it could be a mythology RTS?

This is pure speculation. I don’t have any insider knowledge.
They have an unannounced game and they already made Halo Wars 2 for Microsoft.
Like Relic they are also owned by Sega so that shouldn’t be a problem either. Creative Assembly helped Relic with their latest game (Company of Heroes 3) that features the strategic map from the Total War games.
So Relic could also have helped Creative Assembly in making a game in the same engine as AoE4.

It seems like a good match in many ways.

But there are also hints that we might get an AoMDE. The AoE3DE team released less patches in the last few months so either they work on something big for AoE3DE or they are working on AoMDE which uses the same engine as AoE3DE.

There would be a different team working on AoM2 if that’s the case so Relic can focus on AoE4.