I know there are many posts/comments with people complaining about the graphics or how it’s not like AOE2 (or too similar to AOE2) or whatnot.

I just wanted to put this post to show my appreciation of some of the cool ideas that ARE implemented.

For example, the ambush possibilities from the forests seem really cool!

What are some of the things you guys find really cool?

I liked almost eveything new showcased, except for the arrows and other weapons which are too big and have a weird trajectory. Hopefully they redesign them a bit.
Im looking forward to play it and think it’s gonna be a good game. It looks promising, well done Relic!

the ambush possibilities from the forests seem really cool!

indeed i liked it too as it will give more strategic depth into the game, and also from what i seen it seems it will only work for trees spread out tress and not all of them 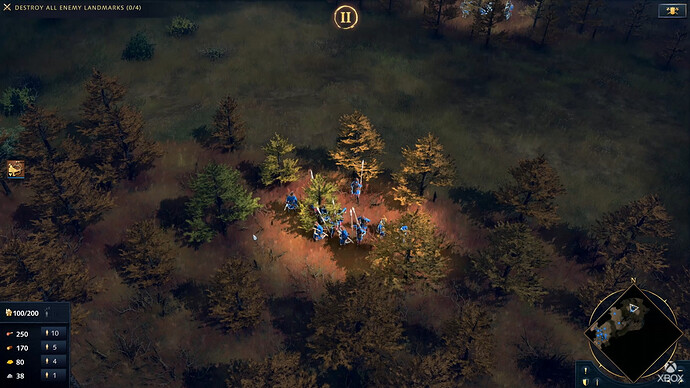 and i personally liked this addition more villagers will feel a bit more unique then others which i’m really glad of.

and as for the units on the wall it seems it will make siege even more fun and siege towers will be more useful to it’s aoe2 counter part, a battle between units on walls is gonna be fun.

and i really liked the graphics they should scale down the size of arrows and or give us option to do it.

personally i’m hyped for this game.

I actually like the graphics and I really think this game will have potential. I also like the fog of war being affected by terrain, and if you watch the Spirit of Law video, he points out a lot of cool features built into each type of unit. It really shows that the developers put in a lot of thought into each unit. The whole debate about the graphics reminds me of when AoE2 DE came out and people were complaining about the graphics being worse somehow than the HD version. Now, ask anyone who played both and they will say the new graphics are way better, because they objectively are. I think in time, people will grow to appreciate the new art style.

I like everything they shown besides units art style.

I’d like to know if the game will come with a map editor, I think that’s key to the game’s success and post launch player retention.

Absolutely agree. Editor, and don’t forget about modding support. The Definitive Editions have a too much limited modding support, but I hope it will be more adequate here.

Arrows and units visual styles apart, the game will surely be a blast. Can’t wait to try it!

I also think that. I really applaud what they have done with the game. But they have to fix some art assets, such as oversized arrows.

I am really hype about asymmetries: Chinese, Mongols and Delhi are gorgeous. However, I am sad that, apparently, we will not have a meso civ =/

i love to put my archers to the walls of my castle. that idea is so good since The Lord of the Rings: The Battle for Middle-earth game. Finally saw in an AoE game, it is so great feature for me. This could change the whole defend mechanics. And if your oppenent don’t have any siege tower or not be able to do because of he is at previous age, this is a good advantage for a player who moves to the next age before his oppenents. It’s so great. And which area of the wall you put your archers is also very important. These new features will change AoE experience in a good way. Because there is more strategy than before.

The fighting on walls is something new to me that I like a lot. I’ve only ever played aoe3 so idk if it’s in aoe2 or something, but the mechanic looks interesting. There is also probably a heavier resource investment into those walls, which i find fascinating. Should make for some fun scenario games and stuff like that.

I love everything beside arrows and team color on units a bit much for readability. Game looks much more strategic then previous titles with asymetrical civs, hiding in forest, units on walls and some unit abilities. Thank you devs for listening the community!

I also really liked seeing the ambush mechanic. I hope that your line of sight is restricted by enemy walls as well as forests, so that walling up serves as both protection and information denial. I also hope that elevation affects your line of sight, so that placing outposts/towers at high points is incentivized. It would also be really cool if some elevations were high enough to see over walls, so that scouts could spy on enemies undetected. Maybe they could even include a unit that can pass through an enemy’s gates just for information gathering? Or maybe, if you take out a guard on the top of a wall quick enough, the alarm will not sound for the other player that they are under attack and you have a chance of climbing the wall undetected? Altogether, I am very excited to see how more advanced battle tactics can be used to gain an upper hand over your opponent, especially in PvP play, and especially with regards to new siege mechanics.

i also like about gathering foods from separate farms like AoE 2 and gathering wood by cutting trees AND taking woods to woodcutter building. i don’t like AoE 3 economy system because of that. But AoE 4 is looking great with that stuff. Gathering source is important part of this game and i’m almost addicted to building economy in AoE 2. Oh that feels man. Getting rich and serving my dear peasants

But in AoE 3 there was none of this. If you click source okay your peasant automaticly gathering, cutting wood but there is no building for woodcutting etc. So I’m so happy about this. But my concern, I hope they fix weird looking animations and big weapons. If they fix them then it would be my favorite strategy game including AoE 2.

I need to say that, I was a student when i play AoE 2, now i’m grown person but i liked the art style they choose, i understand that they need to get attention of everyone. Not just history maniacs or boomers like me

I like the idea of the spy! a unit that looks like a villager to the enemy but would have to click on it to attack it.

Terrain features is what makes a game like this easy to play, but difficult to master, and thats whats awesome about it, correct positioning, patience, applying pressure and managing all the units and eco!

Spies in rts are fun to use but deeply annoying to play against.

yeah he needs like a slightly different hat or something.

I get that, but in a game where walling seems very common and potentially blocks LOS, I’m not sure how else players could scout each other to learn about the army compositions they face, without actually attacking their opponent. Since scouting information is so important in AOE2 and allows for deeper interactions between opposing players, I wouldn’t want to see it become less significant…

I may simply be overestimating the prevalence/strength of walling in competitive play, though. Tweaking that could easily render spies unnecessary, and maybe that’s the better way to go.

Many thanks to the developer too. I’ve been waiting for this game for a long time. Wall combat, ambush, different gameplay by civilization. And the campaigns look really true to the historical level.

I like how they changed the Defence and the overcoming of Defence aspect of the game.

The dynamic of offence and defence will be different.
You can’t us as many natural obstacles as in AoE2, forests even turned into weak points.
But walls become much stronger and more valuable defences.
You likely have to build a wall all around your base to be able to defend it but than you can’t control all the resources.

Also the fact that foot soldiers can build siege weapons means that you can move your army more quickly over large distances and than just build the siege infront of the enemy walls.

The game looks like it’s going to be really fun to play.