Relic, when are we going to see archers in walls being used? or Siege Towers?
It is the unique mechanic introduced in this game and it is not used, sad…

The reason why this is not used is because cannons are OP and you cannot counter cannons behind a wall so you either need a new feature like wall towers with cannons or make cannons available after university behind a research, anyways canons are boring and don’t fit medieval time… 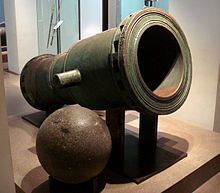 The oldest representation of a bombard can be found in the Dazu Rock Carvings. In 1985, the Canadian historian Robin Yates was visiting Buddhist cave temples when he saw a sculpture on the wall depicting a demon firing a hand-held bombard. The sculpture was later dated to the early 12th century. Early bombards also include two Chinese c. 1377 cast-iron mortars weighing over 150 kg, each with 4 trunnions on their barrels. England began using cannons in the early 14th century. Field artillery was...

Agree on the archers though. They can have good uses before imperial ages though so maybe it’s fine as it is?

Something is not fine when nobody uses it cause is totally negates by one unit… Cannons should be civ specific or a unique unit… If units on walls are no not useful then there is a big design flaw in the game, bombard should do less dmg than trebuchet but more AOE dmg…

But it takes a long time to reach imp and get bombards/cannons. They are not available in castle age right? I think? It’s reasonable that walls become easier to destroy late game. It takes a while to get to imp and most games don’t even reach imp.

d get bombards/cannons. They are not available in castle a

long time? don’t think so, with some civs economy boom it is pretty easy, we are not discussing if civs reach imperial age or not, we are discussing why the new “features” introduced by relic are not used at all not even in noobs game

I’ve used them in games against the AI. You can have a fully stonewalled base in early feudal, and archers on the top provide a very strong defence. The problem is it causes the AI to make rams, whereas it doesn’t if you only make palisade walls, so palisade walls are actually far more effective against the AI.

So it is useless right ? Why people don’t accept the reality?

They are useful pre imp against light horsemen/pikes and even enemy archers due to the wall advantage. The problem is that the player putting those archers on their walls is wasting units who could be helping to expand instead. If you’re turtling like that/staying in your base you probably lack map control/economy and are going to lose anyway.

Ofc this is far from what the devs imagined in cinematic, but trenches, rams and cannons are simply too good to bother with archers on walls.

TheViper puts archers on stone walls in this game:

I use it- It is kinda tedious to get them on the wall the way I want, though.

I’m using stone walls myself and have archers there to defend the walls, also I have cavalry ready to attack any enemy siege because I know otherwise they will take down the stone walls.

I’d like to see perhaps a slight nerf to the sieges to allow more room for siege to take place with siege towers etc on walls. Now that we have this feature, it’s sad to see it go to waste.

I think the walls could maybe get a lil more HP, as it stands I feel like they come down too easily.

My archers are attacked by melee units climbing to the wall, when there is a cavity on the wall.

I really like the archers on walls and the siege tower combat. For me it’s one of the best things in AoE4. It’s really useful Playing against AI, specially you have some cavalry to deal with Rams, your are set. However, it’s Right that as soon as the first cannon appears they become useless.

That said, let’s be honest: the common situation in PvP games right now is:

Cannons are pretty OP right now, not only against walls, but in general. Specially you can mass them really easy. I would like them to be slower (movement, packing/unpacking). It would also be cool if creating them would require additional effort (developing previous techs) or you could only create a limited quantity, so you are forced to take special care in order to avoid losing it. Another idea would be that each cannon only have a set quantity of shots before breaking (or it needs to be reloaded in a fortress/siege workshop) giving a bigger blast radius, but a much slower attack speed (one shot every 20 seconds) could also work.

However, if you ask me, they are something that are more appropriate for AoE3, not the era that AoE4 should be covering, Wich I was told it would be the same as AoE2.

The game was won already he was having fun…

From my limited watching, i feel like… cannons need to be good vs walls, but a slower reload/ pack time (everything packs too fast). So more siege dmg, but less effective vs units.
Cannons should not be able to fire through walls! That is what wall towers/ cannon upgrades should be for.
So a treb is a slower but longer range option, but a cannon is a more dmg, but closer range option.
Cannons should have the slowest pack time.

Siege towers should allow archers to fire out to counter wall archers.
If enemy units are on a tile next to a gate house with no other units around it, the gate should open.
once a tower is on a wall units should be able to scale it like they would a castle entrance (effectively creating a path way that one could just click on enemy ground and units would follow that path)

as a special unit, one could have a siege tower with a small springald on it

archers should be able to garrison on tops of castles like they do on walls with same bonuses.

I love walls also and as many of u have brought out the devs have put alot of effort into the walls, buffs to units, and the overall ease of walls. So as to not wreck other aspects of the seige units or unnecessarily nerfing…. to help defend the walls cause no defending seige can reach a seige unit thats attacking the only way i see this being balanced is if the seige units… prob only cannons and smaller seige (not trebuchet) can be walked ontop of and placed on the walls. They then could technically reach the same distance as the attackers if not 1-2 spaces extra cause of wall bonus, and thus only work as a defense and could also be countered by trebuchet attacks.

Dont vote no if your only reasoning is cause u dont like walls to begin with, or if you just can’t understand the overall balance potential. Otherwise maybe consider voting when you have a balanced view of why not…

Why cancel the upgrade option of stone wall tower? Like cannons?
Siege weapons on walls? Probably should put them on the walls huh?
Spyken1 November 14, 2021, 3:20am #19

There is several problem whit canon.

In medieval time, canon fire more in linear line and was short ranged, for more precision.

Canon where ofthen in bow range, forcing the enginear to build a defensive baricade in front of the canon and build trench.

2- Absence of enginear that manipulate the canon.

In medieval time, there was no way to break a canon, except by over loading it whit gun powder and jaming the exit.

The solution was to fire arrows at the canon enginear, to stop the process of reload of the canon, and maybe kill the precious enginear in the process.

A other solution was to send in a raid cavalery, to kill the enginear and comme back to base. Normal units would overload canon whit gun powder and break it , or put too few gun powder and never see the canon ball fly. (stuck in canon)

3- Pack, unpacking and aim of canon is way too fast.

Only changing the canon aim needed alot of work.

when are we going to see archers in walls being used?

Just use it.
Nobody restrict u, they are useful.