Average out Goths as a civ counter or get countered

Unit countering is what makes this game, but straight out civ countering shouldn’t be so extensive.

I suggest two changes that would make Goths more averaged across all of these matchups:

What do you think about giving them Arbalest but lose Hand Cannons?

What did you experience about Elite Kipchaks vs Elite Huskarls? I think Elite Kipchaks can’t really break pierce armor, but I’m interested about your thoughts

Dont touch goths mirror in DM, they would kill you.

I am suprised actually quite suprised. Goth have the best winrste on the game for all elos including 1600+. Both outstanding in 1v1 and teamgames statistics.

What do you think about giving them Arbalest but lose Hand Cannons?

Goths with arbalets with bracer lacking only Thumb Ring sounds extremely intrusive (into Goths identity) and too strong. It would in fact fully counter all of mentioned hard Huskarl counters. The combo of Huscarls, Halbs, Arbalets, bbc would be probably the best post imp 1 civ combo in the game (with barrack production behind).

What did you experience about Elite Kipchaks vs Elite Huskarls? I think Elite Kipchaks can’t really break pierce armor, but I’m interested about your thoughts

Kipchak completely destroy all infantry even Huscarls thanks to additional arrows and mobility. Against Huscarls you just need to micro a little bit more. Once you get 40-50 kipchak Goths can’t do anything.
If you watched Arena Clown Cup Finals of Viper (Aztecs) vs Tatoh (Cumans) Tatoh completely destroyed few eagles that Viper had. Eagles behave similarly to Huskarl there and lose against Kipchak with Hussar spam in front. This is what I experienced myself as well.

I didn’t mention Italians with Condottieri because they lose to champions of Goths in terms of both - production and cost-efficiency so it’s not a 1 unit counter to Goths.
At the same time I thought about putting them as a counter to Goth because of their arbalest + Condottieri combination. Which is special because of no need to go through maa-swordsman-2h-champions upgrades when making Condottieri.

It sounds weird because Goths don’t have good cavalry or archery to have a chance against good flank or pocket civs.

Dont touch goths mirror in DM, they would kill you.

11
I’m well aware about the 1v1 Goth DM culture. After all I’m in top 100 players on DM ladder.
My comment on that would me: adapt? wouldn’t a small change be interesting to see?

But yeah, I don’t think we should not change anything about the civ just because players are used to how the civ has been so far.

There is no need to change Goths, they are one of the best civs now, while they were one of the worst in AoC.

It is good to have a 1v1 Meta Infantry civ that is not Aztecs or Vikings (which play as Archer civs until late Imp anyway).

It is good to have a 1v1 Meta Infantry civ that is not Aztecs or Vikings (which play as Archer civs until late Imp anyway).

Why did mbl say that in the pre KOTD event: Goths are extremely risky because you pick them to counter a single civ

Because Goths lose against most Meta civs that are not Mayans, but beat Mayans to a bloody pulp, like Mayans do to everyone else.

By winrates, Goths have also made it to top 5 quite a few times.

Goths are bad against non-meta civs as well. The best 5 civs maybe are: Chinese, Mayans, Vikings, Aztecs and Britons, Goths were picked to kill Mayans. Which non-meta civ can Goths kill beside Koreans?

Arabia: data and statistics, including civ win rates and play rates, for the map Arabia and ladder 1v1 Random Map across 1650+ Elo.

I believe if we’re talking about Goths vs
1)

Against those it’s mostly decided before castle age on this level. Infinite militia, double barrack maa with skirms later if needed (still in feudal age). In castle age huscarls (if enemy crossbowman) or monk siege (if expensive UU) or swordsman (if infantry). Then in imp on equal eco you should always die as Goths because Goth’s HC are not good enough most of the time (almost always).

usually you go drush or maa into wall into Huscarls asap.

usually you just want to boom and make it a late game but you still start with militia/maa then skirms if necessary.

Basically any civ that relies on Archers.

But there is no need to average out anything. Goths are a counter-pick civ, which is to be expected in a game with 35 of them.

That is their purpose, smash Archer civs.

Are you one of those people?

Most people are not, the best players do not say anything here, so you can close the thread and go to Discord with it.

I think I’ll agree with @AlightJewel1130’s thoughts about Ethiopians, Britons, Mongols, Saracens, and Indians… because he is a better player and he makes fair arguements without linking aoe2stats.io winrates.

Unit countering is what makes this game, but straight out civ countering shouldn’t be so extensive.

Actually I have always thought this way. It is pretty frustrating to have a civ lost/win. Goths are the extreme case.

People are asking for a general HC buff. Maybe locked behind a tech to choose what civs get it. What do you think about giving the goth this general buff directly?

Regarding the huskarls nerf I got the point of negative MA, it can definitely work…

because he is a better player and he makes fair arguements without linking aoe2stats.io winrates.

The win rates issue is really annoying and unfortunately it suggests people very wrong conclusions. When a good player speaks ignoring the win rates is always well accepted from my side

Those are the same as Korean ones tho.

You’re right! I missed it - the difference is mainly in having that eco advantage when comparing Vietnamese to Koreans against Goths. Thank you for noticing.

I’m not a 1600+ player, but am interested to understand this better. According to the combat simulator, Mayan two-handed swordsmen are far from disastrous against elite huskarls. Is it getting this wrong in a big way, and if so, what happens in practice to make it play out differently to its prediction? 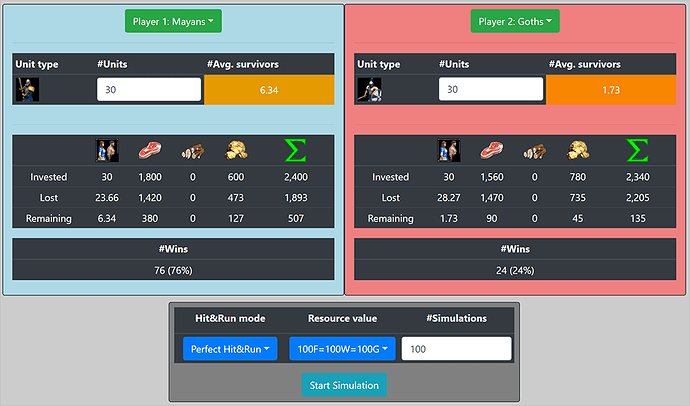